My first introduction to energy drinks came when I visited Germany in high school. I was at a World Cup party when someone came in with some vodka and a case of Red Bull. Being young and unaccustomed to alcohol, I didn't really pay much attention to the whole affair and thought that it pretty much tasted like a chewable aspirin. Though, I do remember being cautioned that you could drink the German Red Bull with vodka, but not the Austrian version because it contained actual Bull byproducts...I still don't really think that's true, but it's fun to think about Austrians ingesting straight bull hormones.

Anyhow, come college, then grad school and law school and I came to realize that a good energy drink is the next best thing to a roommate with a prescription to ritalin. You get the caffeine with the added bonus of a lot of B vitamins which comes in handy when you're performing feats of mental gymnastics.

So I really don't know where I'm going with this. But I remember NPR doing a piece on Red Bull and they reported that the guy who founded the company go the idea while traveling through Southeast Asia where he noticed that people were sipping these little elixirs all day long. He did a little tweaking to improve the taste, added a splash of carbonation, and now he's worth tons of money.

Since then, just about everyone and their aunt Grace have entered the energy drink market because it's the perfect refreshment for an xtreme generation. Personally, I'm not a very xtreme person. I ski instead of snowboard, hike instead of trail run, and I never got used to the taste of Mountain Dew. But I seriously gave pause and had to rethink my lifestyle when I saw these energy drinks in the asian market the other day: 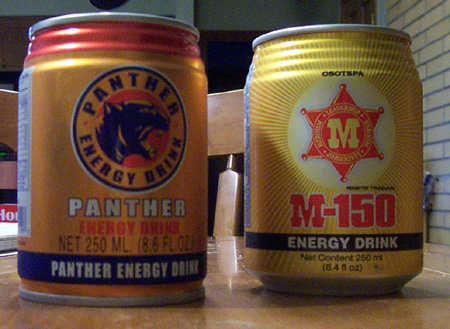 There we were, stocking up on some soy sauce and kimchi when we were accosted by these tiny cans of liquid that promised to increase your energy levels. We only picked up a couple of cans, but the selection was pretty robust.

The Panther Energy drink, in particular, caught my eye because of the menacing sincerity the can hinted at. Red Bull may give you wings, but Panther will rip your frickin' jugular out.

The stuff seems to contain the same ingredients as its american counterparts, but one nice detail is that the side of the can even has a recommended dosage:

So let's chill some Panther and see what this stuff is made of : 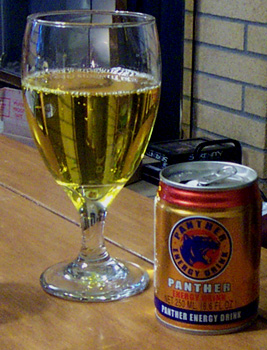 This doesn't actually contain real panther, does it?

The can didn't say anything about how to serve the stuff other than chilled, so I opted for a glass. Somehow, it seems as though you're doing the drink a disservice if you consume it from anything other than the hollowed out skull of a defeated foe.

The first thing I noticed about this stuff is that it doesn't contain the hint of carbonation that makes Red Bull so inviting. And it's sort of viscous. But I was so focused on the energy content of the can that would soon be in my body that I kept drinking. After about the third or fourth sip, this stuff started to grow on me. It was like drinking testosterone and I wanted to run through the neighborhood, leaving a trail of my musk to ward off potential rivals. 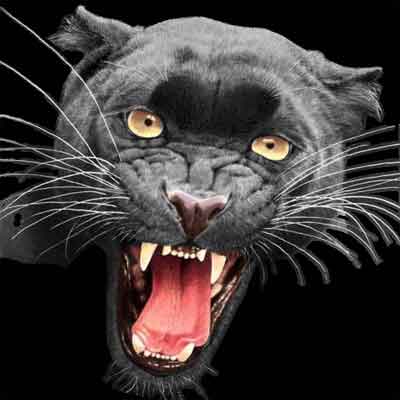 The other can I bought was the M-150. I know that the photo quality is sub-par, but the label contains a star with the words Leadership and Heroism encircling it. It looks like something the soviets would feed their young troops before pushing them into the front lines. But is it xtreme? That's kind of like saying the russian roulette scene in the Deer Hunter was intense...