It was Bear's birthday this weekend, so we decided to celebrate by hitting Oaks Amusement Park for the day. Oaks Park is located at the southern end of Portland and actually sits on the banks of the Willamette River and yes, there are plenty of oak trees. Eager to explore a new area of the city, we first stopped and had breakfast in Sellwood which is a neat area, if not a place you move to when you've turned into your parents, but with a little more edge. After a great breakfast, we hit the park and started a day that ended up being a lot more fun than we had anticipated. 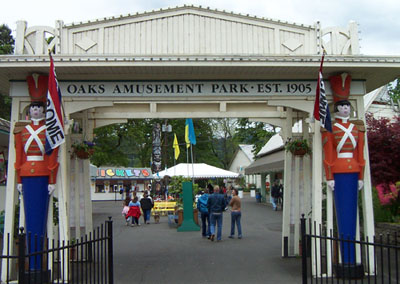 Oaks Park was built in 1905 by one of the utility companies and it was originally a trolley park. Historically, these were located outside of the city and accessed by taking the local trolley. The trolley is long since gone, but with all the oak trees, I'd guess that the original place was nothing more than picnic grounds and maybe a dance hall. Life back then was probably dull.

Unlike the Enchanted Fores, Oaks Park bills itself as an amusement park. It's more like a permanent carnival with the typical midway games and carnival style rides. Having just arrived with bellies full of eggs, we decided to peruse the midway games before hitting the rides. 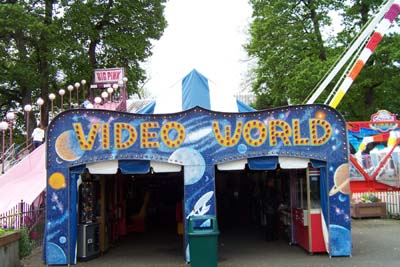 The midway at Oaks Park is pretty evenly divided between small arcades that have an assortment of the new and the old as well as the usual suspects of "skill" games that prey on suckers like me. The arcades were singularly impressive as they had a host of the older claw and novelty games you simply don't see anymore. 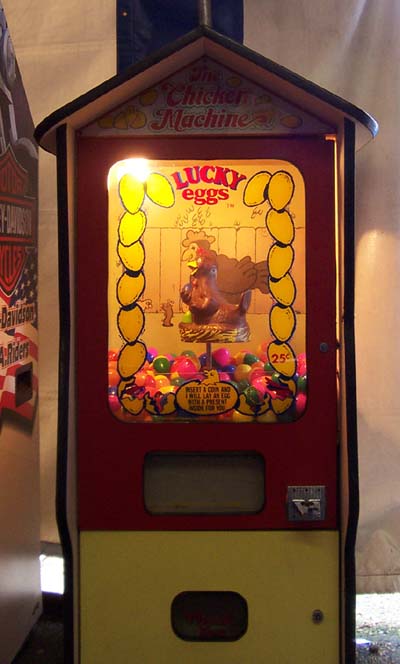 For example, when's the last time you got to win a plastic egg bearing prize for a quarter? 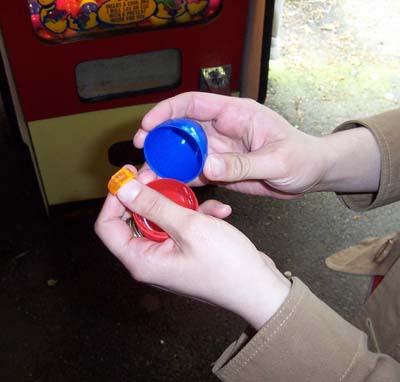 But the fun didn't stop there. It was Bear's birthday so I had to treat my woman right. You stay here and I'll put a fiver in the change machine, baby. You can play anything you want, up to five dollars. And at Oaks Park, that fiver goes a long way. 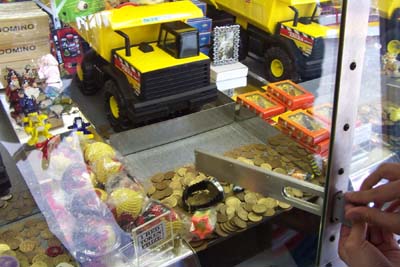 And who can refuse dumping tokens into these things? These types of machines are always so enticing with loads of tokens just waiting to fall over the edge. Until you realize that the levers simply manage to shove the tokens underneath other tokens. Try as you might, the damn things never get pushed over the edge. We realized that our injury was further insulted by the carny working this booth who was dumping loads of tokens in. At first I thought he was trying to give us a subtle hint about how to play the game, but then we realized he was hitting all the machines that were about to pay and clearing them of all the valuable tokens. I can't believe a carny would do such a thing. A carny rigging a game?

I got revenge, as this same carny also ran the adjacent rifle range. You know, the type where you get to shoot a light emitting rifle at the various targets that perform when you hit them? If you're ever at one of these things with a camera, I highly recommend snapping a quick picture with the flash TURNED ON. 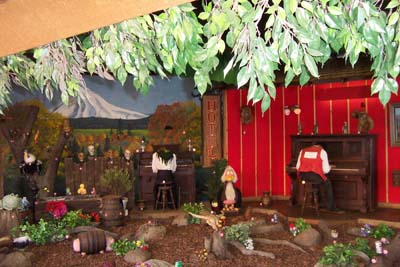 Within a second of snapping this picture, the whole place erupted into a frenzy. Cans were leaping from the ground, birds were singing, pianists were pianing. Having had no intentions of causing this, I leapt back and was prepared to be reprimanded for my reckless behavior, but to no such avail. 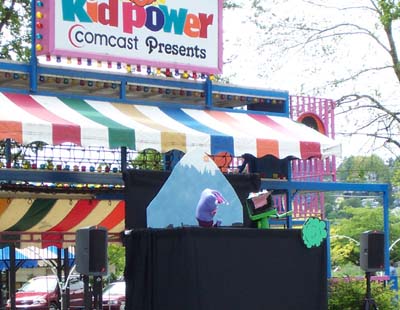 We pursued a few more trinkets and ended our tour of the midway with the puppet show. I'm not sure who put this show on or why, but the whole theme was The Inter-planetary Sanitary Eco-friendly Puppet Show. And then it just got weird. I'm still not clear as to which of the puppets shown above was the alien, but the whole premise centered around an alien teaching a stupid human about the dangers of pollution.

That might be a worthwhile, if not boring goal, but the whole five minutes I watched centered around a drawn out discussion on the importance of cleaning up dog feces. It was the most scatological puppet show I've ever seen. I don't know what these copraphiliacs do for their day jobs, but I recommend that the management at Oaks Park checks the local sex offender registry before hiring their entertainment.