There's nothing quite like a late Saturday morning breakfast. It sets the perfect tone for a lackadaisical day. The kind of day where you don't have to worry about work on Monday, or accomplishing anything of value today. Some Saturdays start with a different tone. From the moment you wake up, you know you're facing a day of errands, in-laws, or yard work. But not on this particular Saturday. This particular Saturday was all about idleness. So we piled into the car and decided to sample another of St.Johns' wonderful breakfast establishments.

There's something a bit different about St. Johns. A lot of people like to argue that there is something different about Portland. But when a Portlander raises this argument, they're usually referring to how Portland is anti-corporate or the people here are more environmentally friendly that people elsewhere. To some extent, that's true. Portland doesn't fit in with its neighboring cities along the west coast. But St. Johns isn't different in that sort of way. I don't think someone would visit St. Johns for the day and walk away with the feeling that the people there were progressive. Instead, I think you could argue that St. Johns is different because it's been forgotten by the rest of Portland. Not that this really seems to bother any of the locals.

So why the build up? Simple. If you don't really understand what St. Johns is, you'd have no way of contextualizing Pattie's Home plate. The whole page from here on down would just appear blank. Pattie's Home Plate is a soda fountain. It's been a fountain and dairy since the 50s. But something happened along the way. New owners took the place over some years back and instead of a deli, they decided that the large space would best be served if they kept the fountain part, but replaced everything else with Avon products and an inventory of really old crap. 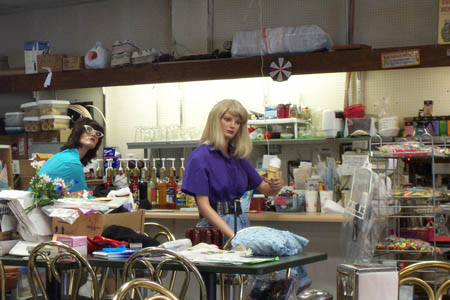 For instance, how many soda fountains have you been to where the actual soda fountain was replaced by mannequins eternally enjoying their soda treats? They're positioned throughout the diner area so our breakfast was continually interrupted by someone in our party flinching because they caught a mannequin staring at them from the corner of their eye. It's pretty unnerving.

This is maybe on of three or four fountains in the whole country where you'd get that kind of thing. Sure, you may come for the mannequins and reasonably priced breakfast, but you'll stay for the shopping. It's like an Avon lady, Goodwill and Johny Rockets collided. You can literally buy just about anything at Pattie's: 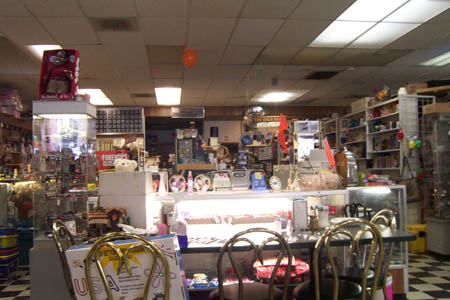 Seriously, the picture above is blurry but it contains a whole display case full of watches that no longer tic, used VHS movies, a whole room full of Halloween costumes, Derek Jeter cologne, a men's gift section with model cars and such, a lot of yarn and thread, old patterns for clothes, 80s window decals, etc. etc. etc. I could go on and on. The place is filled from floor to ceiling with stuff that isn't used, but it's not exactly used. Any you are never really sure if the item in question is for sale, or if it's just on display. 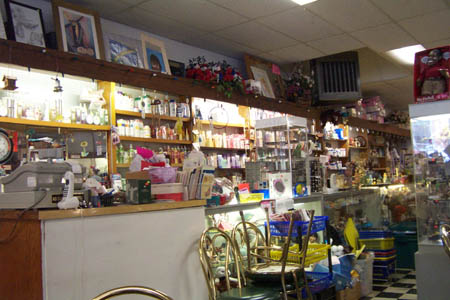 But this was supposed to be a breakfast review. The food is typical diner food and because they have a tiny grill there, it may take a while to come your way. We had a party of four and each got our plates one at a time. So don't go if you're in a hurry. The fod itself is ok. The prices are reasonable enough, so I guess you get what you pay for. Nobody walked out talking about how good it was and nobody got sick. Personally, I'd recommend going just for the experience of eating in such a strange place. They serve breakfast all day long- so you can even hit Pattie's before a night of drinking at Dads.

Whatever you do, make sure you bring a few extra dollars because you just might find that rare treasure you've been searching high and low for.