The durian fruit has long been a delicacy in southeast Asia and is often referred to there as the king of fruits. I've heard several reports that these pungent fruits are banned in public places because of their strong smell, yet from everything I've gathered, the seem to be extremely popular: 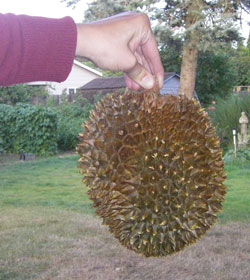 The fruit itself is relatively large and has a thick skin that is completely covered in spikes. The fruit grows on tall trees, making these things lethal when they fall.

Figuring out how to cut into one of these things can be a bit perplexing, but the fruit actually has a built in seam and you can easily get into a durian by running a sharp knife along it. 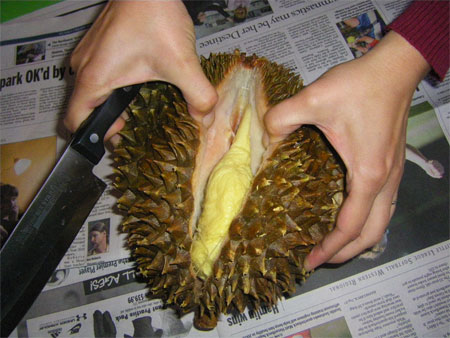 Peeling back the edges of the durian reveals the fruit's rich, creamy innards. It's also completely grotesque. When you throw in the sound, all I could think of were the eggs in Aliens that would hatch those face sucking alien things; it's something Klingons would eat.

Unfortunately, the smell isn't that much different.

At this point, we were all crowded around the patio table and people started to back off one-by-one as the durian's scent found its way to their nostrils.

But the gentleman at the market told us not to be thrown by the smell as the fruit tastes different. He actually went on about how much he loves the taste of durian, so the smell of decay simply wasn't enough to dissuade us.

The fruit itself contains five sections that all contain the custardy yellow flesh of the durian along with large seeds that look like mutated hazelnuts. It also helps spread the unique aroma. If you open this outside (which I heartily recommend), don't be surprised if the police get calls of a decomposing body in your house. Just a word of caution. Then again, if you are hiding a decomposing body, stocking up on durian might provide you with a compelling explanation. 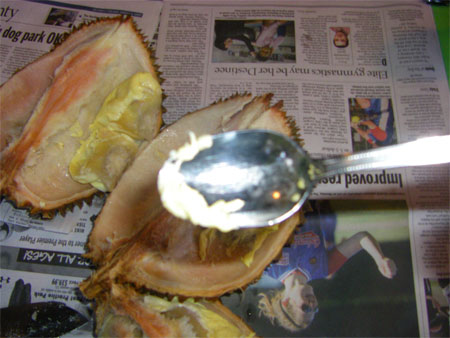 By this point we had all spent so much time hemming and hawing over the scent that there was no other choice but to dig in.

Using a spoon, I easily scooped a little out and was ready to go. I tried to remember what I'd heard about the smell and taste being unrelated, so I felt pretty confident that I could handle the taste.

The flesh was really soft and more like a custard than a fruit. The taste, on the other hand, was a little different than the smell. At first I was hit by the taste of overripe papaya and swallowed the first bite thinking that it was actually pretty good.

Less than a second later, I was hit by the aftertaste which was completely different. There were strong hints of rotten onion, stomach bile, nuts, and oh so much more. Getting it all the way down was challenging as my gag reflex was fighting me the whole way.

That was the strange thing about this food. I'm always up for trying new things and have eaten plenty of things I didn't care for. But I've never had to fight to get fresh food down before.

The taste is truly beyond description. The only thing I can really compare it to is taking a fresh papaya, some onions, a couple almonds, and stuffing the combination into the hollowed out cavity of a dead cat. Let that sit out for a couple weeks under a warm sun and you're in the ballpark.

But I do think there is a definite cultural bias here. The flavor is so intense and so foreign you just can't get your head around it. It made me think of my first college roommate who was a Japanese exchange student. He'd love to try anything that I would bring home from the grocery store, but the one thing he never understood was Dr Pepper. To him, that was the most disgusting thing he'd ever come into contact with and he simply couldn't understand why anyone would drink it.

So is the durian as awful as everyone says? Millions of people shell out big money for them, so I guess it's a matter of perspective.