Recently some good friends gifted me with a copy of a TV Guide from the week of January 27 - February 2, 1990. I have never read TV Guide, seeing as how I'm just not that into watching television. But reading one from 18 years ago is definitely a trip down memory lane. Let's take a closer look:

The first thing you might notice is that you probably wouldn't think that this particular copy was 20 years old, were you to find it sitting on someone's coffee table. Yep, Indiana Jones was still going strong. It also makes you appreciate just how old Charlie Brown and company are.

Once you crack the cover, you're presented with a plethora of good old fashioned TV and entertainment news. I was a freshman in high school when this thing came out and I can still remember watching a lot of these shows on the old hand me down television set my parents let me keep in my room. Well, not the ones on channel 4- that stupid set never got that channel for some reason.

And there was simply so much drama back then- Doogie Howser (who might be the first blogger of our generation) worrying about Wanda while still also dealing with the high stress world of child prodigy medicine; the lovable Corky discovering life on the outside world and still managing to teach others how to love; And Frasier Crane was still just a local character at the bar. 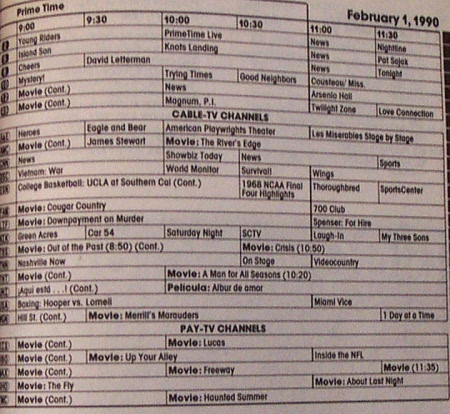 And don't even start me on the subject of whether or not Parker Lewis really could lose, or the occasional holiday special. It's amazing how much more there was to watch back then, especially considering that there were so many fewer channels to choose from. 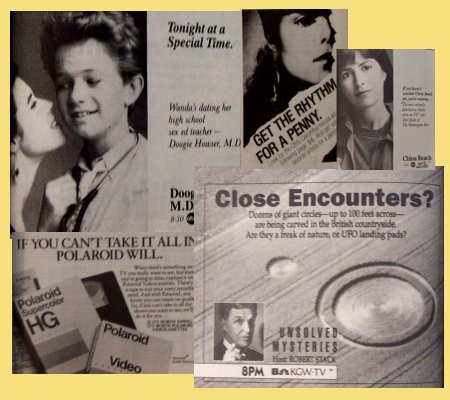 An Album for A Penny, What A Great Deal!

Despite my fondness for old television, I do have to admit that the ads are probably the most interesting part of reading this thing. The Columbia House ones are particularly rampant in this particular issue. For those who aren't familiar with these ads, let me catch you up to speed.

There was once a time (before the internet) when you'd actually order stuff from a catalog. In this case, Columbia House would offer cassettes and CDs that you could buy for discounted prices through their club. To make the offer even sweeter, they'd have these deals where you could get your first 8 or 10 tapes for a penny, provided you agreed to buy the next 5 at regular price. So of course you'd sign up thinking "I'll just cancel after I order the 5th tape."

Of course, things weren't quite that simple- First off, you'd have a hard time choosing anything because the selection was only ho-hum, but they also did this wonderful thing where they'd just send you tapes. That's right, one day nothing and then wham, here's a tape that I didn't order sitting right here in my mailbox. But they were nice about it- if you didn't want it, simply return it unopened within the next three or four days and we won't charge you for it.

I think I still owe them money.

The other ads were pretty run of the mill fare for the time period: VHS tapes, Bob Villa, Free Book of Mormon Offers (remember their TV commercials?),and The Super Bowl was just around the corner so there are also ads for Bud Bowl II.

It really all just makes me long for the days before anyone even knew what reality television was. For my two cents, I'll take the worst episode of Growing Pains over the best episode of whatever it is where you're supposed to care if the skank will choose the douche or the bigger douche any day of the week.

And, if you happen to be up at 6am Sunday, WGN is offering Mass for Shut-Ins (Catholic). I'm not making that up.