The Watcher in the Woods

The Watcher in the Woods is notable for a few things. It's probably Disney's only attempt at a true horror movie, it's one of Bette Davis' last films, and the ending makes no sense. The movie starts with an American family looking to rent a home in England. Their real estate agent shows them a classic mansion at a bargain price, but there's a catch. The old landlady, Mrs. Aylwood lives in the cottage next door and she's a bit particular about who she'll rent the place to. 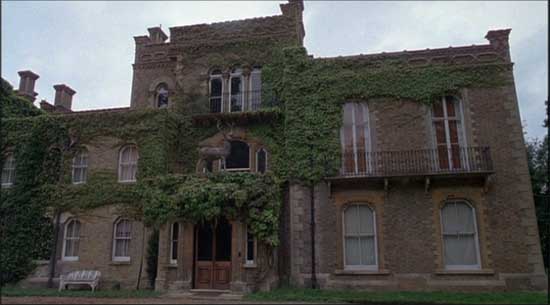 The family writes her off as an old eccentric, and once Mrs. Aylwood meets their older daughter Jan, she agrees to rent the house to them. The parents are thrilled, but Jan feels that something isn't quite right about the place. She thinks she sees a flash in the woods, and a window cracks revealing the shape of a triangle. Mrs. Aylwood also picks up on this and asks Jan if she senses things.

Jan is spooked, but her parents insist on moving in anyways. At this point it doesn't take long for Jan to realize that something is wrong with this place. While moving in, she notices that the mirror doesn't show her reflection, but it does reveal the reflection of a blindfolded girl silently crying for help. The father explains that old mirrors do that sort of thing and tells Jan to stop being such a whiny little girl. 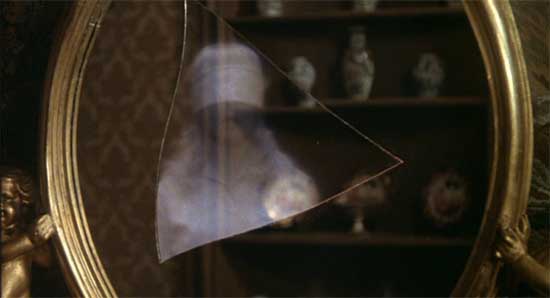 But there it is, another triangle. What does this mean? Jan is confused by the whole thing and a bit shaken up by what she's seen. Her little sister is being affected too. While visiting a neighbor's house, she is possessed by some sort of presence that causes her to go into a trance and write backwards on a dusty window. The neighbor, Mary Fleming, is disturbed by what Ellie writes but won't explain why. 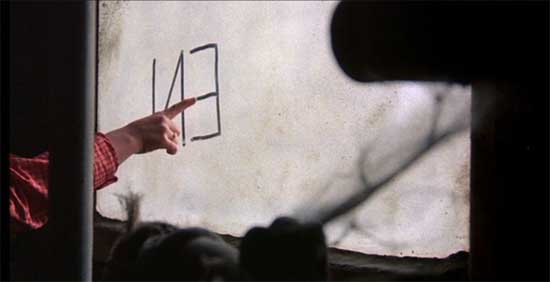 Ellie thinks that Nerak would be a great name for her new puppy and doesn't seem the least bit concerned about the fact that something compelled her to write that in the window. Jan's even more suspicious at this point and starts to keep a closer watch over her younger sister. After all, if something is in the woods, then they should probably stay the hell away. But Ellie is too stupid to heed this advice and, the next day, she and Nerak go back into the woods.

Jan sees them from the house and goes after them. This is one of the more chilling scenes of the movie. The wind in the woods starts to pick up and Jan simply can't find her younger sister. She finally comes upon Ellie at the pond and Ellie claims that she didn't hear her older sister. Jan's relieved that her sister wasn't harmed and starts to rush her back to the house when she notices something in the pond. It's the reflection of a glowing circle. First a triangle, now a circle. But there's no time to piece it all together. There's a blue flash and a tree falls, hitting Jan and trapping her under the water.

Luckily Mrs. Aylwood appears with a big stick and manages to push Jan down under the water to free her from the fallen tree. Jan struggles with her, thinking that the old lady is trying to drown her, but Ellie later tells her that Mrs. Aylwood actually saved her life. Mrs. Aylwood brings Jan back to her cottage to warm her up with some tea and that's when Jan finally learns what the hell is going on. Why did Ellie name her dog Nerak? Because it's Karen spelled backwards. Mrs. Aylwood explains that Karen was her daughter's name and that her daughter disappeared 30 years ago. Was Karen the girl Jan's been seeing in the mirror? And why is she blindfolded?

Mrs. Aylwood tells her that her daughter had snuck out one night with Mary Fleming, Keller and Colley. They were playing some sort of game in the old church when lightning struck and set the place on fire. They searched the remains but could never find Karen.

At this point, Jan is determined to get to the bottom of the mystery. She enlists the help of Mike, the token love interest whose mom just happens to be Mary- one of the friends who was there the night Karen disappeared. Jan shares her concerns with Mike while horseback riding one day. Of course, Mike decides that they should cut through the creepy forest on their way back and that's a good idea for about two minutes until a wind comes out of nowhere and spooks Jan's horse. The horse bolts and takes Jan to the old church where Karen disappeared. 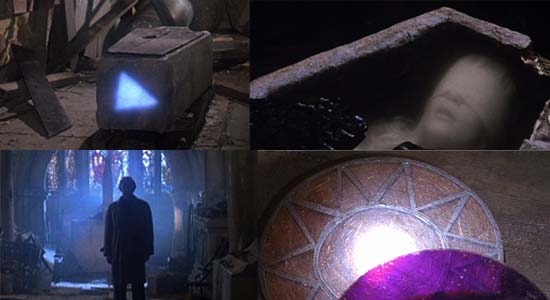 Jan decides to go inside where she is led to an old coffin. The coffin has the reflection of a triangle and when she looks inside, she sees an image of Karen. Then she notices that she is being watched by a creepy old guy who turns out to be Colley, one of the other friends who was there that night. Colley tries to chase Jan, but is scared off by the appearance of Mike and Ellie. The three go back inside the church when the wind kicks up, breaking windows and causing two discs to fall on each other. First a triangle, then the image of Karen and now two circles. Jan is confused because she's not really all that bright. But she finally gets the message when she goes to the fair with Mike.

Jan is also compelled by the fact that Karen is becoming more and more determined to make contact with their world. The scene above is probably the most memorable to those of us who originally saw this when they were young. While visiting the fair, Jan and Mike venture into the funhouse where Jan sees Karen pleading for help in the mirror maze.

The movie introduces us to Colley and Keller, the other two friends. It seems that Colley, who has turned into a crazy alcoholic thinks that Jan is actually Karen. Keller has become a very rich man who hides from the accident by locking himself away in his giant house. But the guilt is getting to all three of them. In the meantime, Ellie becomes possessed again and delivers a message to Jan. Jan pieces it all together and realizes that the pending eclipse has something to do with all of this. You see, there was an eclipse on the same day 30 years ago when Karen disappeared, so if she got Mary Keller and Colley together to repeat the ceremony, there's a chance that they could bring Karen back.

With no time to spare and Mike thinking she's lost her mind, Karen scrambles to get the three friends back to the church to repeat the ceremony. The mother makes a brief attempt to escape with Ellie and Karen, but the watcher destroys the only bridge out of town. The three friends are so guilt ridden that they agree to meet at the church to repeat the ceremony, but they must hurry if they want to get Karen back.

The three old friends form a circle around Jan and start their old ceremony of friendship as the eclipse takes place outside. In the meantime, Ellie becomes possessed again and heads to the church to deliver a message. It seems that during the last eclipse, the power of the friends transported Karen to another alien dimension. The watcher, who has been the one possessing Ellie, was transported to our dimension. They basically switched places and now it is time to undo it all by repeating the ceremony. The friends continue with their ceremony when Karen disappears and then there's a moment of silence. But she comes back and has Karen with her. They saved the day, and the ghosts and visions were nothing more than friendly aliens trying to communicate with them, but Jan was the only one willing to listen. Even as a kid, I remember feeling patronized by the ending, especially after such a chilly build up.

Most people don't know this, but the writers really struggled to find a good ending to Watcher in the Woods. The original ending is included on the DVD and after watching that, the one the released doesn't seem so bad. In the original ending, the friends are performing their ritual around Jan when this evil alien appears, blasts mike with lasers from its eyes and kidnaps Jan. 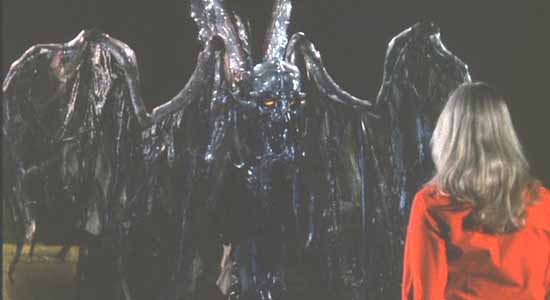 The monster is friendly, though, he's just not a good communicator. He takes Jan to his planet where Karen has been suspended in their world. But for some reason, Jan just walks in and gives her a hug and they return back to Earth together. 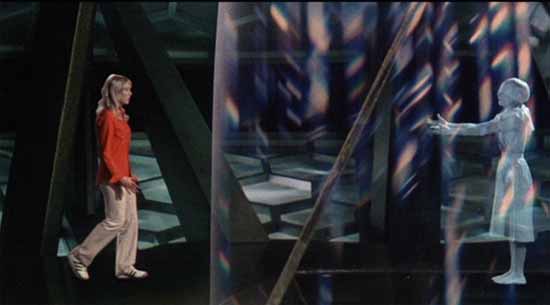 Neither ending makes much sense and I don't know why they had to tie aliens into the movie. Maybe Disney felt that ghosts would be too scary, but having to end the movie with a long exposition in order to tie the movie together is just insulting. At any rate, The Watcher in the Woods is still a good watch and there are some great scenes to the movie, you might just be better off skipping the last ten minutes and imagining your own ending.