Ah, 1990. A new decade. The 80s were over and everything suggested that this new decade would be radically different: the cold war was pretty much over, Americans fall in love with The Three Tenors, I started high school, and Vanilla Ice his the scene. Life was definitely going to be different in the 90s, that much was for sure.

I think that all of these events had some impact on my life. Graduating high school allowed me to go to college. The Three Tenors convinced me that really is just silly. The fall of the Soviet Union meant that I could travel to Eastern Europe. And, of course, Vanilla Ice would write an autobiography that I would one day review for you on this site. Well, gentle reader, your time has come.

May I present: Ice by Ice 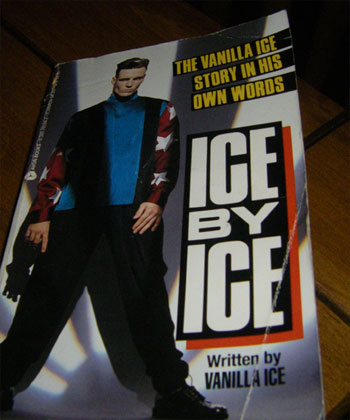 You see, when Vanilla Ice hit the scene, he brought with him a host of rumor and speculation. I guess it's how people dealt with the phenomenon of a white rapper. Suddenly, entertainment reporters were saying that he really wasn't from the streets, that he stole his music, he was making a sad mockery of music, etc. I'm really surprised Congress didn't get involved.

So to clear the air and put to rest any doubt as to who Vanilla Ice was, he published this autobiography.


Before I continue, I should issue a caveat that this book was reportedly written by his manager and that it contains a lot of things that are either untrue, or skewed. With that said, I am going to dismiss all of that as pure speculation and take everything written as true, because I know that Vanilla Ice wouldn't sell out like that.

So who is the real Vanilla Ice? Let's try to answer that question by taking a look at chapter 1, Ice Formations.

Vanilla Ice was born on Halloween, 1967. His real name is Robert Van Winkle. He was raised in Miami. He has a half-brother named Kip Van Winkle.

According to the ice-man himself, he didn't live in the projects, but he did live right across the street from them. He also had terrible fights with his brother, especially when Kip would take his Stretch Armstrong doll.

Early on, Vanilla Ice also shares something really important: he likes Halloween. Not just because it's his birthday, but he likes dressing up:

I really got into dressing up on Halloween. Every year I was something different . . . For the last four years I've dressed up as the same thing- a sniper.

I like Halloween too, so that's really interesting to me. But he goes on to add: "...not like Army camoflauge, more like an urban sniper." One year, I dressed up as a vampire. 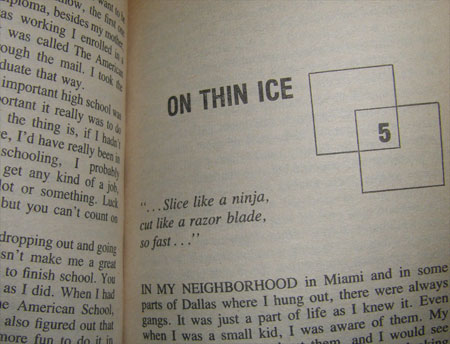 According to the book, Vanilla Ice had a pretty normal childhood. They didn't have any money, living across the street from the projects and all, but his single mom made sure that they got what they needed. Little Ice wasn't a good student, but he was popular, very very popular. He attributes this not just to his great personality, but the fact that he is totally original:


I would think of things nobody else had ever done, and come in to school on my first day like that. I wore cut-off pants to school before anybody else, or I'd come in wearing my pants inside out! I'd wear a boot on one foot and a tennis shoe on the other, wear blue jeans with one leg long, the other leg cut off, stuff like that. I did this before anybody else. I've always been 100 percent original. Now that stuff's the accepted style in a lot of places.


Except of course, for Halloween, when he'd come dressed as an urban sniper. But when Vanilla Ice wasn't setting a new trend, he was hanging out on the streets. He says repeatedly that he was a terrible kid.

Luckily, he found music. Vanilla Ice says that he got into music real early and started listening to Parliament and the soundtrack to Car Wash. His love of music got him into dancing and also beat-boxing. All of it from the streets of Miami, where he lived across from the projects.


As soon as I thought I was good enough, I'd go out and compete against the other kids on the street. We'd have these dance contests in front of whoever happened to be there.


He paints a dark picture of his activities on the street. Beat-boxing, dance contests, rapping- it conjures images of a contemporary West Side Story, hell on earth.

His interest in soul music and funk made it easy for him to appreciate rap when it hit the scene. In no time, Van Winkle was learning to rap. Writing his own raps and polishing his dancing skills.


I was the king master rapper of the neighborhood. Not to say I never got beat. I got beat all the time, but nobody could do everything like I could. The good ones could rap real well. But when you'd go to beat-boxing, the couldn't even beat-box one lick. They'd be like, "Oh, I can't touch that!" And then when I'd go to dancing, they'd be really blown away. That's why I've said I never met anybody like me.


In short, Vanilla Ice was the greatest rappper-beat-boxer-dancer that ever lived in the history of the world, USA. He honed his skills on the streets, but never thought it would go anywhere until he moved to Dallas. By now, the young prodigy was in high school where he continued to be a trouble maker.


One of the things I did that got me into trouble was starting this group called "The Pep Busters." It was a bunch of guys, mainly three of us- me, Mark and Victor. There'd be other kids from time to time, but we were the main three...We'd go to the pep rallies and make fun of them. We'd bust 'em, go nuts- just do every crazy thing we could think of to disrupt them. Naturally, we got thrown out all the time.


Naturally, indeed. But what Vanilla Ice reveals next comes as a real shock. Even though he was extremely popular, Vanilla Ice was more than just the class clown at his upper middle class high school. He was still an outsider. He lived across town. The bad part of town. When he wasn't running with the Pep Busters, he was running with a gang and being a natural leader, he soon rose to kingpin position: "My first gang was pretty much made up of all my friends. The majority of the kids in it were black, and there were two Cubans. Some older kids had started it, and they led us into it. Soon we took over."

Vanilla Ice is surprisingly reticent when it comes to providing details of his rise to power. He does provide some insight into what he and his co-conspirators were up to.

We'd go to the mall and stuff, and if anybody messed with us, we wouldn't take anything from anybody. We dressed the way we wanted to dress, we did our hair the way we wanted. If anybody criticized us or made fun of us, we started a fight."

Like Tupac, Vanilla Ice's gangster lifestyle provided a conduit to fame and fortune as a rapper. One night, Vanilla Ice's friend entered him in a talent contest at a local hip hop club. Vanilla didn't know this, but decided that he had what it took to win, so he decided to perform. Because he is the best at everything he does, he naturally won. The next day, the club owner called him and they agreed that he would manage Vanilla Ice. 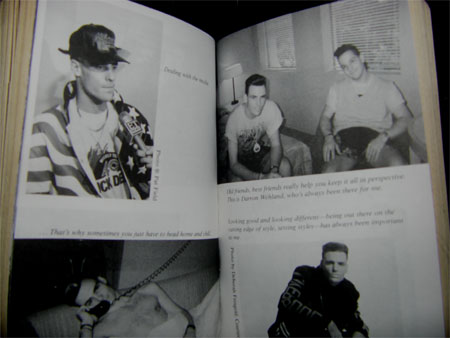 Vanilla Ice then goes into depth about becoming the best rapper ever and the period leading to the release of his album. It took months of polishing his act, collaborating with producers, and developing his style. But it paid off. Vanilla got out of the gang, he got off the streets. He was becoming a star.

"When I'm performing, I don't just give 100 percent, I give 1,000 percent." The fact that this is impossible doesn't faze Ice. He's a dedicated hard worker and that's the moral of the story: No matter who you are or where you come from, you can be successful. Vanilla Ice was in a gang, he was stabbed, he lived across the street from a bad neighborhood- he persevered.

The final chapters are dedicated to answering common questions about Vanilla Ice. He reveals that he doesn't have a girlfriend, he doesn't like food with foreign sounding names, he wears designer clothes now. "I buy all my underwear at Victoria's Secret. I've been buying it there for years. A lot of people think that store only has fancy ladies' lingerie, but they've got great men's underwear, too."

Word to your mother.