Bear had to pick up some teaching supplies today, so we headed to the Dollar Tree to get some educational materials. This pretty much left me perusing the aisles when I stumbled upon the deal of the century. There, in the rear of the store was an advertisement claiming that these people had rib-eye steaks for a buck.

This had me sucked in. Normally, I am a bit uptight when it comes to buying food. I tend to stay away from anything discounted on the grounds that it there must be something wrong with it. Last year's fashion? Bring on the clearance price. Yesterday's corn? Sounds like botulism to me. maybe I've had food poisoning one too may times, but I'm a bit paranoid when it comes to freshness.

But today was different. As I studied the food section, it dawned on me that it might actually be possible to live off of dollar store food. But could you eat well? Come, humble reader, let's find out. 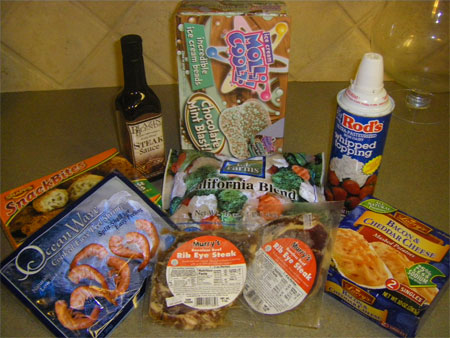 So as Bear was trying to be productive, I was secretly waging a surprise attack on our digestive systems. Not only was I planning to cook food from the dollar store, but I was determined that we would eat well. It took time, it took cunning, but I persevered.

For our dinner, I decided that we should have a three course meal complete with an appetizer, rib eye steak, and dessert- with all the ingredients purchased from the Dollar Tree.

But before I begin, let me clarify. Sure you could find sustenance at the Dollar Tree. I mean, if the zombie apocalypse happened tonight, you could rush to the Dollar Tree and find calories. Potted meat and knock off gummy worms are calories, but a rib-eye steak for a dollar? Is that kind of dining possible? Apparently it is because I managed to procure the ingredients for a surf 'n turf dinner...skeptical? You should be. 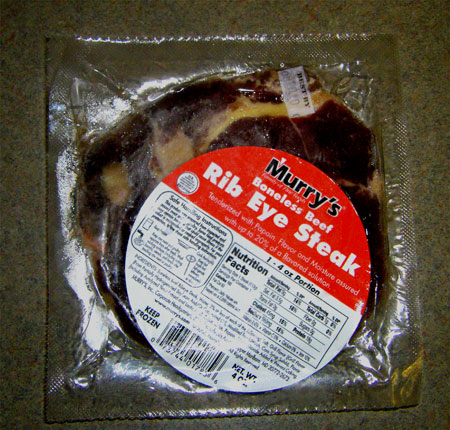 OK, so a meal of steak, shrimp, vegetables, twice baked potato, appetizer and dessert. Give me a grocery store and your credit card and it's no a problem. The Dollar Tree had these ingredients, just not like I'd ever seen before.

For starters, their rib-eye steak was frozen and vacuum sealed. I like me some red meat. I like it a lot. But I've never purchased frozen beef before. I'm sure that there were many times that I purchased thawed red meat, and I've definitely purchased the value pack and then frozen the leftovers, but actually buying frozen steak? Much more, in individually wrapped 4oz portions? 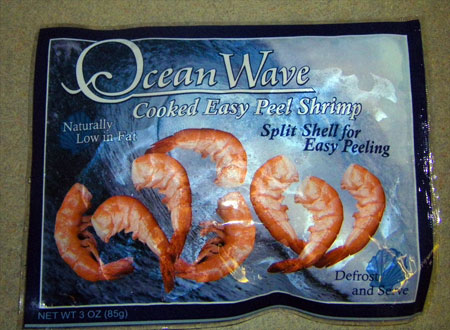 OK, frozen shrimp in a bag, not a problem. For one dollar?

The whole adventure really hit home when we paid our $8 for the items pictured above and we got home. Bear looked at me doe-eyed and asked, "you mean our whole dinner came from the dollar store?"

Bear had a long day and I don't think that promising someone a steak and shrimp dinner complete with all the accoutrement then revealing that you don't need to go to the grocery store because you were just at the Dollar Tree is really fair, she still assented to my gastronomical experiment.

But where was I? Oh yes, experimenting on the bear. First up was the appetizer, Snapp's Snack Bites (breaded cream cheese and jalapeno peppers). 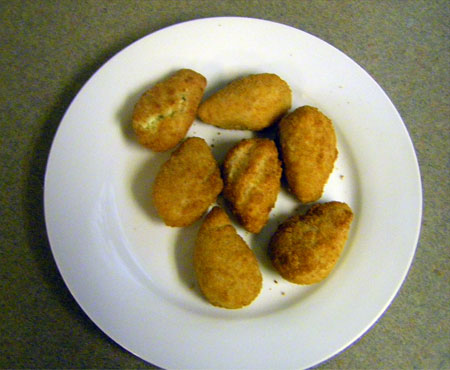 For a buck. these weren't half bad. Granted, the portions were small, but then again, how may jalapeno poppers do you really need?

This stayed the appetite and gave me the strength to keep going. Up next? Time to start cookin'.

First I fired up the Traeger to BBQ the rib-eye steaks. This was actually a little perplexing because the steaks were 1) still frozen 2) paper thin and 3) a color I had never seen before. 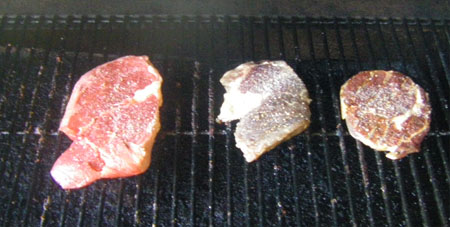 The one on the left is a real steak

But what really threw us for a loop were the shrimp: 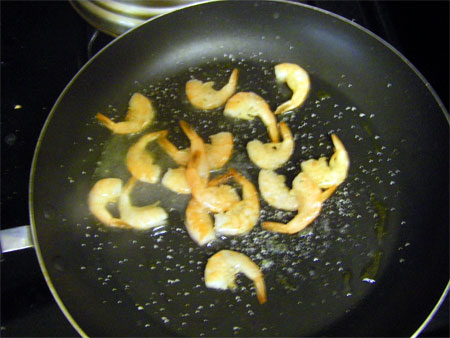 My original intent was to put these on the BBQ, but these were far too small. What was really interesting was that these were bigger than bay shrimp and much smaller than anything else you'd buy at the grocery store. Plus they were pre-cooked, still shelled, and completely frozen.

The obvious solution? Well, the package said to simply thaw them and serve (which seemed odd because they weren't shelled), but the food poisoning phobic kicked in and said pan fry.

So shrimp on the frying pan, steak on the grill, what's left? I put our twice baked potatoes in the oven (yep, two for a buck!), our California Style frozen vegetables on the stove (I don't know why they were California Style as there wasn't any avocado), but dinner was on! 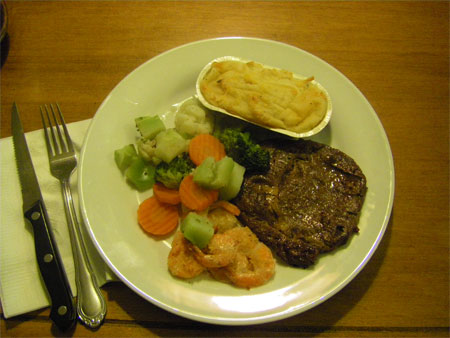 I don't have an expensive camera, but it did come with a food setting which makes me think that's the reason why everything looks better here than it did in real life.

The conclusion? It kind of threw us for a loop. The steak was thin and definitely not rib-eye-ey, but the flavor wasn't bad and it wasn't as chewy as the color would indicate. So it had that going for it. The frozen 'California' vegetable medley was just like any other bag of frozen vegetables, the potatoes were obviously reconstituted from dehydrated potatoes and lacking enough water to really bring them back from the dead, and the shrimp? 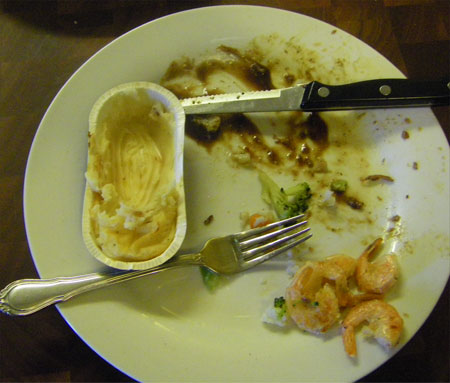 We surprised ourselves by enjoying everything else, but the shrimp was simply too much. But Gertie enjoyed them, so there you have it. It was more turf than surf, but everything we made was palatable. I know what you're thinking: "Mark, we enjoyed everything, but is there more?" 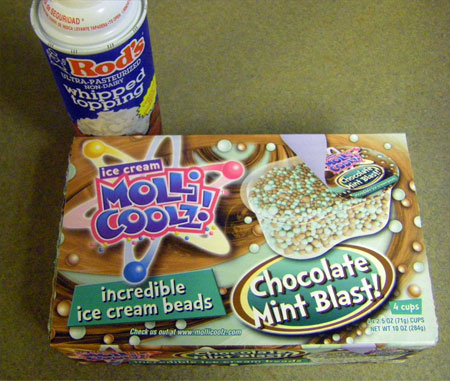 For dessert, I prepared Molli Coolz (yes all the off brands at Dollar Tree bear a first name) mint 'n chocolate chip ice cream beads complete with Rodd's Whipped Topping (dairy free but it contains milk parts?). I know, you're doubting me, but here's the scoop: If you've ever worked food service you'll know that even nice restaurants get their desserts from third party providers. They simply aren't equipped to do all the baking. But presentation is everything: 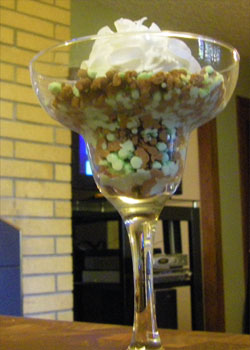 So I dressed it up a bit. But here's the scoop, Molli is basically ripping of Dippin' Dots, the ice cream of the future, and the consensus was that while kids might like it, adults will find that it tastes like Scope and imitation chocolate.

So there you have it. Can you prepare a faux-gourmet meal from ingredients purchased from the Dollar Tree? Sorta. Basically, you can pass the sides, but the rib-eye should be marketed like Krab.

But on the plus side, it's been a few hours and I haven't thrown up yet.