Pause for a moment, gentle reader, and let me take you to a magical place known as the early 90s. More specifically, let's visit my life during the early 90s. You know what, let's just skip this altogether. I was going to jaunt a few lines about how we'd spend our weekends trying to meet girls, but striking out and ending up renting this movie. I'm just going to assume that, if you've managed to find this page, then your high school experience was quite similar to mine. 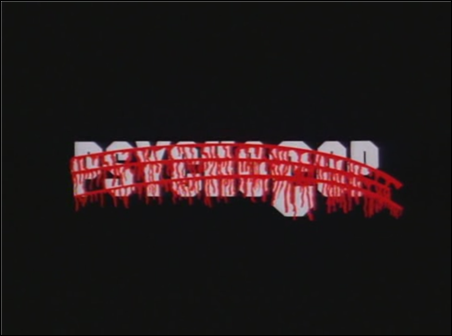 With pleasantries out of the way, let's take a step further back in time to 1989. That date's significant because it was the year they made Psycho Cop. You see, Psycho Cop isn't just a slasher and it isn't just a terrible b-movie. Don't get me wrong, it's terrible, but its terribleness is what makes it great. It's greater than the sum of its parts.

Like any other horror movie of the day, Psycho Cop opens with some spooky music and a few scenic shots to let you know were at an old dilapidated building in the middle of nowhere. Throw in a pentagram, some triple sixes, and a guy washing his hands in blood: 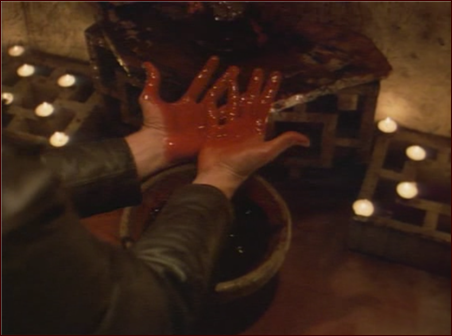 That's Psycho Cop and make no bones about it: this guy is freaking psycho.

Then we'll cut to a young man and woman driving along a dark country road, arguing about whether or not they're lost and what to do about it. To make matters worse, it's their wedding night and it would be a disaster if things didn't turn out perfectly. 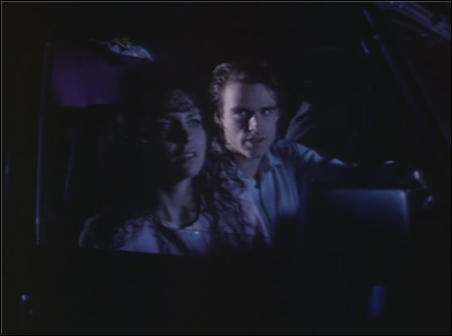 Luckily there's a police motorcycle parked next to a quaint old shed. "Stay here, Barbara, I'm going to ask the cop for directions" 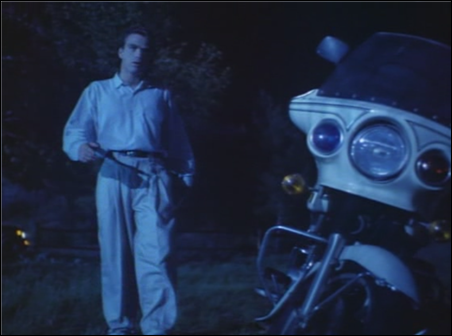 Greg walks off camera, but we're not going to cut before we hear something visceral. Barbara grows impatient and goes after Greg. And what does she find?

You've probably guessed that poor Barbara's a widow by know. Psycho Cop drove a knife clear through the poor guy's head, so we cut to Barbara reacting to this gruesome sight, then to Psycho Cop himself, whose having a good laugh over the whole ordeal.

And this is where the magic of Psycho Cop truly begins. You see, in the action movies of the day, it was always Stallone or Scharzenegger who got the pithy one-liners. But here, that's solely the domain of Psycho Cop who wryly utters "looks like you could use a policeman." 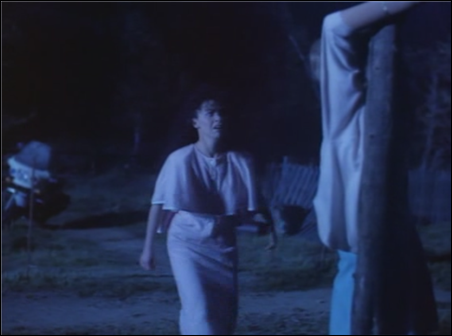 She runs frantically, but doesn't make it far before running into another fresh kill. She's terrified and takes a few steps back before boom- 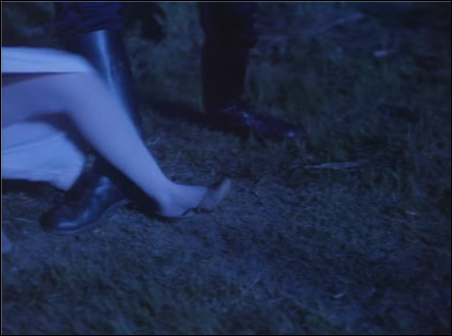 Psycho Cop trips her! The guy can drive a knife through your skull, but he's still got a sense of humor. And then the kill shot: 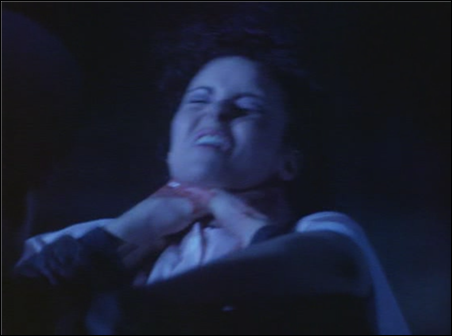 So we cut to what we presume is the next morning and reveal an old classic convertible with six young couples aboard. To make matters even better, once you see these people, you can't wait to see what Psycho Cop's going to do to them. 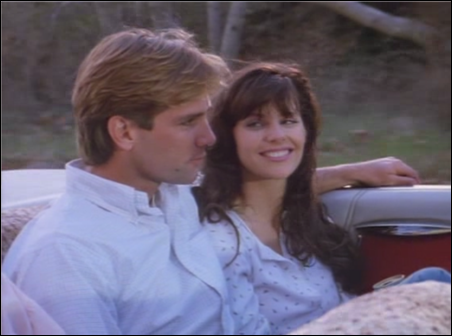 Does she get eviscerated? 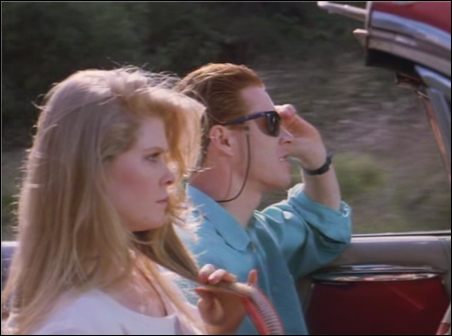 Does the ginger Christian Slater get impaled? 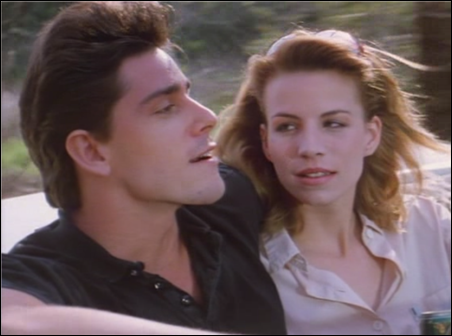 Yeah, it's all beer and good times until they notice a cop car on the side of the road. And now it's following them? This is totally going to ruin the perfect weekend the guy's planned after they cashed in on a hot stock market tip. The girls want to go home now and it looks like everything is ruined. 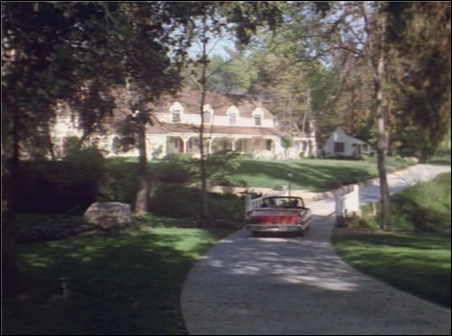 You didn't say we were staying in a mansion so just disregard all that whining, this place is perfect

Sure the house is beautiful, but what about that creepy cop whose been stalking us? We've already forgotten about him, let's unpack. Oh wait, that's him over there in distance leering at us...too busy to notice that.

So everyone rushes inside, leaving the ginger to unload the luggage, when the camera sneaks up behind him. 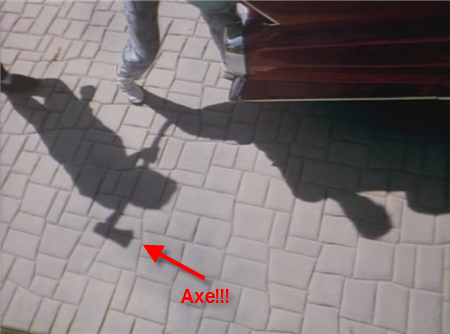 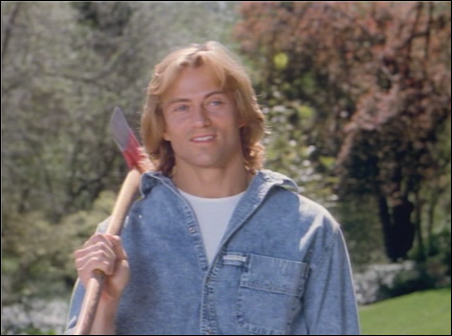 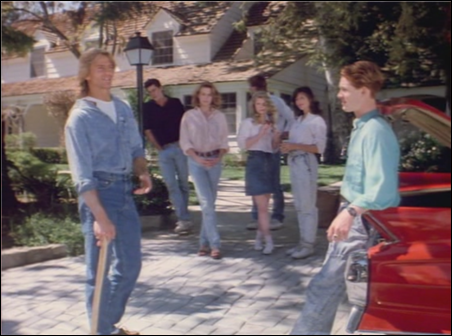 "Did I say caretaker? Actually, I'm more of a security guard. The bank requires one ever since they took this place over and the previous house burned down under odd conditions or something. Anyways, be careful with the jacuzzi, the handle sticks sometimes. Anyhow, enjoy your stay!"

So there's the setup. But what happens next? Do Dough, Laura, Eric, Julie, Sarah, Zack, and the caretaker survive the weekend? You'll have to wait until part two of this review to find out!