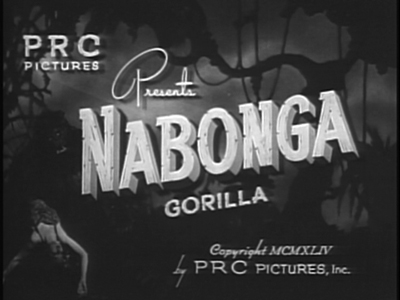 A 1940s jungle picture with Buster Crabbe better damn well have some hot gorilla action in it, and NABONGA does not disappoint. It even has 'rasslin gorillas! Unlike COUNTRY BLUE, this movie lays out pathways to awesome and takes every step to get there. Well, not exactly. One of the twists in the plot is an unheralded jump of say ten years between scenes. It's not a bad shock; in fact, compared to something like the TRANSFORMERS movies, this movie treats you like you're Sherlock Holmes. We're so used to certain types of plot developments being spelled out in dialogue, especially the "ha ha I know, we're totally doing exposition and pointing a big red arrow at it" form of dialogue we see a lot of today. Somehow actually showing what you need the audience to know is hokier than the four millionth explanation of what an EMP is, only to have M say "I totally knew that. Stop wasting my time". 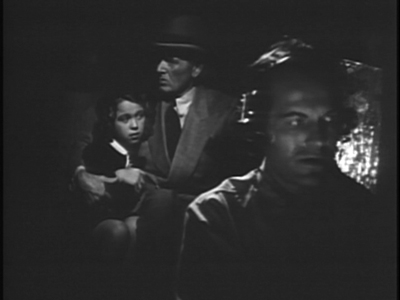 If you're not aware of Buster Crabbe, you're in for a pleasant surprise. Crabbe was an Olympic swimmer who made good in Hollywood, especially in serials. The guy was only Tarzan, Flash effing Gordon, and Buck Rogers. He had an easy charm and spoke lines without sounding brain damaged; plus he could fight like the devil onscreen. The kind of fights we have onscreen these days are technical, masterful, and impossible as hell in many cases (and therefore extra cool); but the actors that learned to fight the old Republic Pictures way mixed it up but good. Every punch was a haymaker, and every fight a tussle. I look at the fights in NABONGA and they look like Jack Kirby or Russ Heath or god knows how many of the great comics artists drew them. They look like they're beating the crap out of each other. 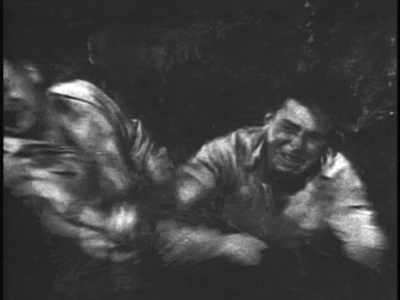 For a movie about Africa done in the 40s, it's not horribly racist. Sure, the natives are superstitious and call all the white guys "bwana", but I pretended "bwana" was local tongue for "colonialist jagoff" and my honky unease was quelled. Crabbe's character, Ray Gorman, made a point of treating the natives well, especially his pal Tobo. He meets Tobo in a small village run by Carl and Maria. We'll get to them. Tobo is attacked by another native over some local native stuff and Gorman breaks it up, saving Tobo's life. So they're pals. When they venture into the jungle together, Gorman insists on taking his share of time hacking at the studio jungle plants with a machete. Gorman's an egalitarian. 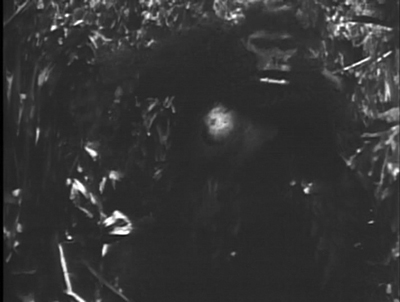 There's even a great bit where Gorman fights an alligator. It's after one of the several opportunities the movie takes to remove Buster Crabbe's shirt. If there's a doorway to gay for me, it's gotta be a shirtless Buster Crabbe sticking a knife into a rubber alligator. Maybe Rick Santorum should watch this movie; it might calm the guy down a little. Seriously, there are nearly zero moments in the movie where they want you to be ogling the ladies. The jungle girl wears a frock down past her knees (oh Maureen O'Sullivan, where have you gone?) and Marie is meant to be sultry, but she's more like Mom's divorced friend sultry. 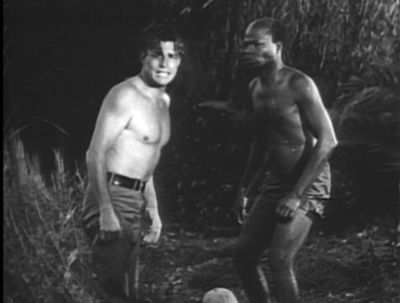 The plot's a little convoluted, until you realize that about half the action in it involves the careful dissemination of all the plot points to all the characters in the movie. NABONGA wants you to know what everyone knows, but everyone pretty much knows everything, so none of the drama comes from ignorance of something that someone else already knows. So, it's filler. After watching two dudes in gorilla suits wrestle to the death, everything else is filler. 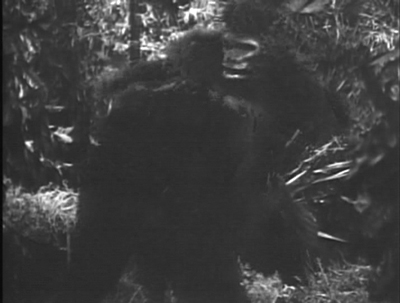 A great thing about this movie is that nobody is fooled by anyone's bullshit. When Gorman is in town, Carl and Maria, the white locals, think he might be a cop. Maria chats Gorman up while Carl searches his room; Gorman claims he's looking for King Solomon's Mines, but the movie doesn't waste a second on Maria wondering if that story's true. Carl finds three newspaper articles, kindly held for closeup so we can see too, that explain the plot so far. A fellow named Stockwell stole some jewels and banknotes and flew off with his daughter. They crashed in the jungle and were never found. It turns out that by the time Gorman arrives in the movie, ten years or so have passed. Gorman's dad was accused of abetting Stockwell and the insult to his honor was so great that he committed suicide; all Gorman wants is to find the stuff and return it to...um...make his dad...that wouldn't really make his dad look any less guilty. 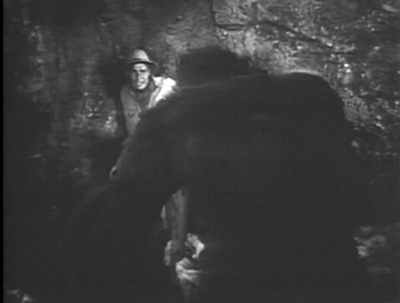 Anyways, Stockwell had his young daughter with him in the crash. When the pilot sees the strongbox of goodies Stockwell has with him, Stockwell kills him while he's trying to fix the radio on the crashed plane. That's a moment you regret later; let the guy fix the radio, then pretend he fell on some bullets, in an alligator's mouth. So Gorman and Tobo go off in search of a white witch who came from a giant bird that fell from the sky because even Corky Thatcher could put those clues together. Doreen Stockwell, the little girl, is now a lovely young woman in a surprisingly modest jungle gown. She spends her time placing cockatoos in trees and hanging out with Samson the gorilla. Weirdly, there are hints that Daddy Stockwell was the one who tamed Samson and taught him to protect Doreen and the strongbox. Nobody in this movie is entirely nice. Gorman is noble, but he has his moments of selfishness. Until Samson comes along, when Gorman first comes upon Doreen and the jewels, he tells her that they're all coming back with him. 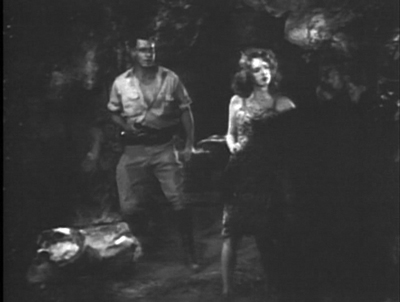 But Doreen only knows the jungle and there are some awkward bits where the standards of the time got in the way of some randy discussion. Hot girls ignorant about sex but speaking quasi-innocently about behavior that can only lead to the nasty goes back to ancient romance novels like Daphnis And Chloe (in which two young lovers cannot figure out how to have sex and try to emulate the sheep they tend by jumping on each other's backs without penetration. Daphnis sits and cries afterwards for being dumber than a sheep.). Here the code is "sleeping in the cave"; that's where Doreen sleeps, see? Samson gets agitated when Gorman's even near Doreen, so our hero prudently sleeps in a tree instead. 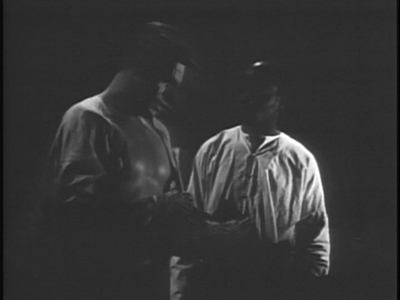 Meanwhile, Carl and Maria, abandoned by their native party over fears of the white witch (which did not scare noble Tobo, but he gets trampled by Samson so that he's not playing third wheel in the Gorman/Doreen scenes later), venture on, for they too are looking for that strongbox. They make hilarious use of stock footage to create a bit of drama. First you have a shot of Carl and Maria pausing at a dramatic offscreen sight. Cut to stock footage of real lion standing there. Cut back to Carl and Maria. Carl says "Hold still; they won't charge you then." This, for all I know, is solid advice. But I can't help but wonder about swapping the lion image for a small child staring blankly into the camera. "Just...hold...still. It won't charge you." After the stock footage lion wanders off, Carl twists an ankle for plot purposes and sends Maria ahead. 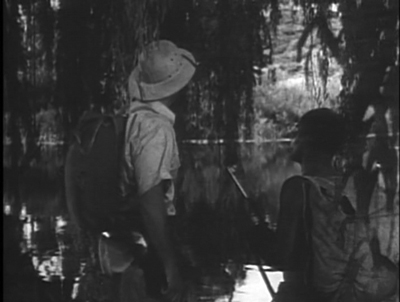 Get ready for the plotgasm: Gorman's stalemated on his efforts to get the strongbox and Doreen away from Samson. She doesn't want to leave and feels that stuff is hers. Maria shows, provoking instant jealousy in Doreen. Maria tells Gorman that she knows how to build a gorilla trap and if Gorman agrees to give her some loot, she'll build one. He agrees and they do this. Once Samson's trapped, Maria runs off to Carl and says she's paved the way. Carl shoots Gorman and they make off with the box. Doreen confronts them and Carl decides to take Doreen too. Maria objects and Carl tells her to piss off. And in the best pissed ex-girlfriend post-breakup move ever, she makes a bee-line to Samson's cage and releases him. 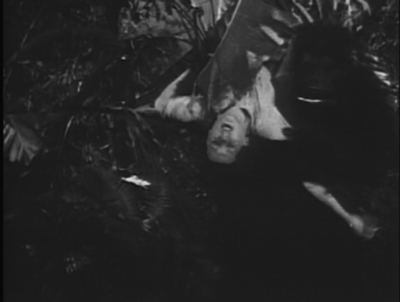 She immediately regrets this when Samson kills her. Meanwhile, Gorman, wounded and stumbling through the forest, confronts Carl and they fight some more. Carl is winning when Samson appears. Carl shoots five or six times and Samson beats him to death and then dies on the spot. With every last impediment dead, Gorman takes Doreen's arm and informs her that he, she, and the box are headed back to civilization. "Perhaps it's better this way," says Gorman, when he really means to say "easier". Ain't it grand how nature and plot conspire to pave the way for the handsome white guy? 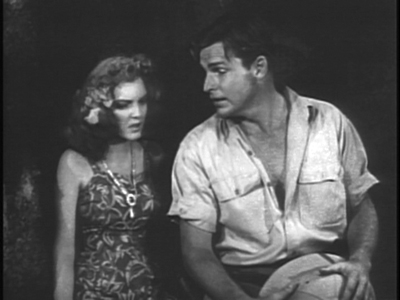 Stayed awake for the whole thing because you can't help but love a movie where everyone behaves like a selfish turd and there's gorillas fighting. Five wide awake eyes for this one, because this is a true B-Movie--75 minutes and out. (One eye equals 15 minutes of runtime.)

John Ira Thomas writes graphic novels for Candle Light Press. He knows NABONGA means "gorilla", but he said it out loud a couple times during the fight with the alligator anyway. NABONGA! For more Movie Somnambulist fun, check out the archives!