THE MOVIE SOMNAMBULIST #14: The Island Monster 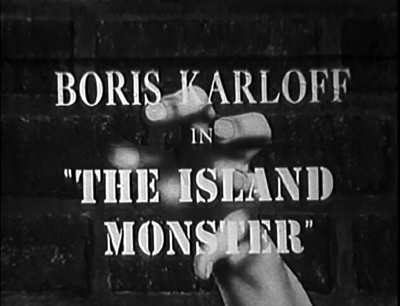 Okay, first off, there is no monster in THE ISLAND MONSTER. At least, there’s no grr argh I will eat you monster. The monster is a dope smuggler who is kind of a bastard. But a monster? I disagree with the American distributor’s title card guy. Perhaps THE ISLAND BASTARD, or THE ISLAND SUMBITCH. The only name that’s really recognizable from the surprisingly non-Anglicised credits (you know, like how Sergio Martino becomes Martin Dolman) is Boris Karloff, so of course he’s the bad guy. The movie puts forth the effort and tries to hold him out early on as the sweet old man who built the children’s hospital in town, but look at the guy. Of course he’s the dope smuggling monster. 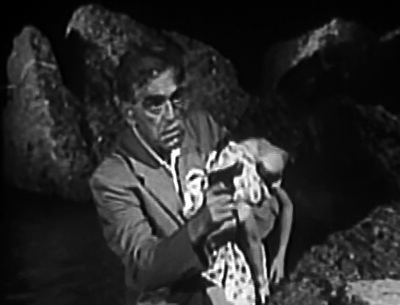 Really, this movie does have a few surprises, like the worst undercover operation ever conceived. This plan makes BIG MOMMA’S HOUSE look like DONNIE BRASCO. It makes trying to make Sean Connery look Japanese in YOU ONLY LIVE TWICE look convincing. I am pounding on this point not because of technology or cheapness. There is less than no effort put into it. You judge. Mario the Treasury Lieutenant is a nice-looking young man with an Errol Flynn moustache and a wife and a daughter and a dog. His Treasury bosses send him to a small island near Naples to go undercover and find some drug smugglers. Undercover in this case means he meets openly with the local cops, does big showy ride-alongs on police boats with uniformed policemen with machine guns, and generally does what every other uniformed cop does on the island…except he’s wearing civilian clothes while doing this! Clever, yes? 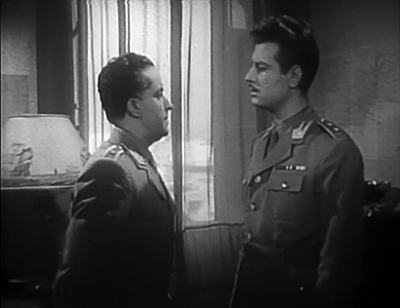 It gets worse, but now some plot. Mario decides that an outdoor café is the nerve center of the operation and starts hanging out there. He meets Gloria, the singer for the orchestra, and Mario decides she’s worth following. He asks the local cops to do it, and they tell him you’re the young handsome man, you can get closer to her than we can. Or perhaps they were trying to break his complete lack of undercover success to him gently. So Mario dates Gloria a bit, and he does indeed get closer. But he is chaste; his is very devoted to his family and won’t have sex with Gloria just to catch some island monster. 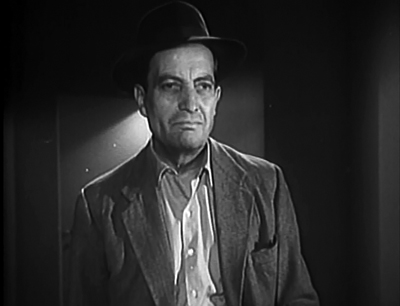 Now, here’s a forehead-slapper of a plot twist for you. Mario’s wife sends him a letter. Mario early on admonishes his wife to make sure to address letters to his cover identity and not his real one; so presumably the letters would read “Dear Mr. Smith, I, not your wife, miss you dearly as you hunt drug monsters undercover as you do. You are so brave, Mr. Smith, whom I barely know because my husband is named Mario.” So Mario’s wife (her name forever buried in the murkiest sound mix this side of a fourth-gen VHS dupe) sends him a letter telling him that she and the daughter and the dog are coming to visit him. I’m slapping my head again as I type that. Mario’s a bit mad, and the wife even admits it’s kind of a crappy idea, but anyways are you glad to see me? 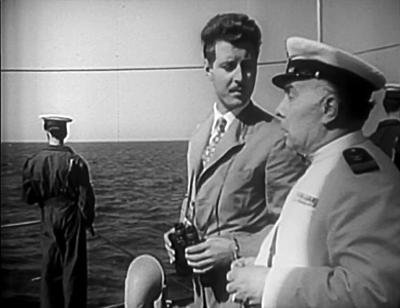 Actually Mario, being the pillar of moral rectitude he is, is in fact glad to see her. He should be glad to see the dog, as he’s the hero of this movie. He even has a backstory, unlike most of the characters in the movie. Mario mentions that the dog was a failed police dog candidate; in the 50s that’s meant to set us up for his redemption later. In the post-LETHAL WEAPON era, it’s a big red arrow pointing at the take-no-shit rule-breaking hero of the piece. Two slight changes to the plot and you’d have the bad-ass Rin Tin Tin noir that history has denied us. You could do it all in redubbing, even. 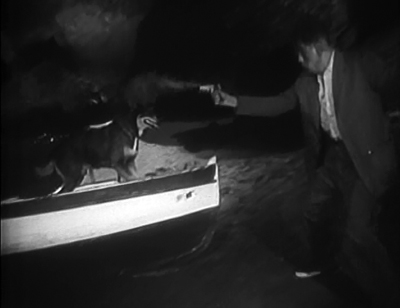 Okay, so Gloria makes it clear to us that Mario’s right about her by going to visit her drug smuggling masters. She doesn’t know who the big boss is, presumably because she’s never seen a Universal Picture and because that’s how these movies work. The bad guys are on to Mario because they have functioning senses. Gloria is just toying with Mario, you see. It’s all very standard movie reasoning as to why Mario isn’t left facedown and floating inside of fifteen minutes into the movie. There’s talk of International Big Bosses on the way. There’s much to do for the enterprising drug smugglers. But Mario’s arrival has brought an uptick in police activity, and they can’t have that. To stop this, the smugglers make a pretty poor decision, but it’s overshadowed by Mario’s even worse decision. The smugglers decide to kidnap Mario’s daughter Fiorella to make him leave town and have the cops stop being so nosy. See, this is a textbook reason why a cop would go undercover, right? To protect his loved ones from evil drug smugglers he’s pursuing? So if we’re writing the undercover handbook for the Italian Treasury Agents, we might go with “Uno: gli non prenda mai la vostra famiglia con.” God only knows what that will say when you jam it back through Babelfish. 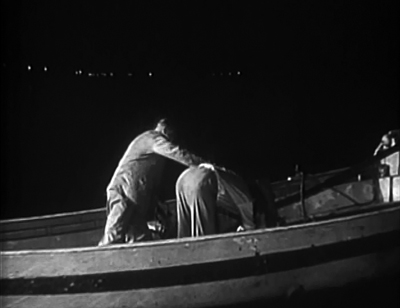 Amazingly, this plan works, sort of. After the demands are delivered via note under the door of a room inside the police station (these guys are untouchable!), Mario’s commander calls him back home; but the local cops are still somewhat active. Mario’s wife stays, along with the dog, at Karloff’s Children’s Hospital. She refuses to leave, you see. After a short pause in police activity, the Treasury agents and the local cops start searching everything, including trucks and even the tiniest boats. They catch some things, but not the dope. Those dope smugglers are just too good. 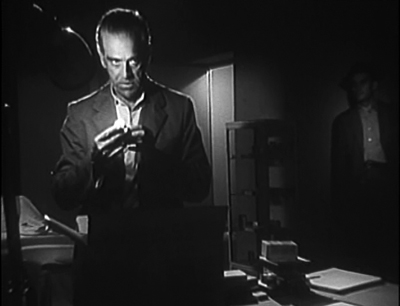 The big Karloff reveal, for the little kids in the audience, occurs when little Fiorella is dragged up from her cave jail cell (cave-jail cell? Cave jail-cell? Hmm.) to see Karloff. He produces a letter and tells her to add something and then sign it. The kid is eight or nine; what would the letter say? “Dear Mommy and Daddy. I’m fed up with this bourgeois life, so I’m hitting the road. I’ll be fine, seriously don’t look for me, love Fiorella”? Okay, that’s not fair. It’s probably just to verify they have her. But it’s also an opportunity for Fiorella to bite Karloff’s arm, and she takes her shot. Karloff holds his hand over the spot for a couple of scenes, to underline the point. 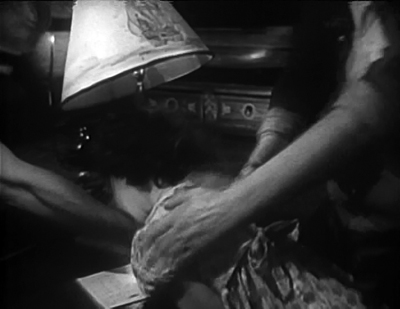 Enter the dog they thought couldn’t hack it, the dog everyone had given up on. Oh, sure, the family loves him; hell, he is a dog. But when he sees the master of the house get up and go be a real cop every day, it gnaws at his heart like squirrels. But when evil invaded his domain, he was ready. This dog sure needs a name, and I don’t think I heard it clearly once. I’m gonna call him Riggs. Riggs first sees something’s wrong when Karloff comes back to the children’ hospital. He can smell Fiorella on that bite mark Karloff’s trying to keep covered. Maybe it’s Fiorella’s toothpaste, or the familiar dental pattern, but Riggs knows something’s up. Riggs even starts sniffing at the arm and getting excited. But Riggs forgot that these people are dense. 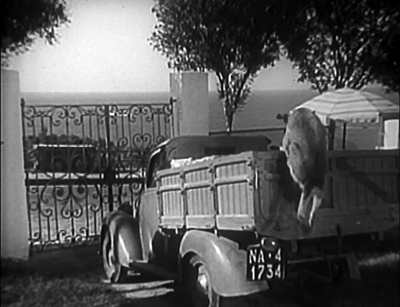 Riggs does the following things to bring the plot home. He sniffs out the bad guy before anyone in the movie does. He waits until Karloff takes off in a pickup that night to go check on things and hops in the back and hides. He slips out of the truck before it’s unloaded and hides. He follows Karloff to a boat, occasionally hiding behind rocks to observe (which by the way is the cutest thing ever). He slips onto the boat and hides under a tarp to ride along. When they drop anchor to wade to a low cave in the water, Riggs swims to the cave and finds Fiorella. This is even the best shot and edited sequence in the film; methinks the 2nd unit deserves the nod here. Then when Mario returns (oh God I have to tell you about Mario returning—next paragraph) and he and Riggs chase Karloff as he tries to make off with Fiorella, he’s the one who gets the better of Karloff and nearly gets shot in the process. In fact, the last confrontation is in shadow, so you’re meant to think Riggs gets shot when in fact it was a local cop who shoots Karloff. Frankly, I would have been fine to have the lights come back on to find a smoking gun in Riggs’ mouth. Good boy! 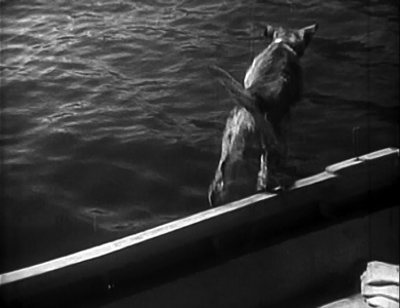 So, Mario comes back before the end. Is he disobeying orders to save his daughter? Nope, he’s much too good for that. You need a badass like Riggs the Dog to pull some darkside shit like that. No, Mario returns on the orders of his bosses. His return is meant to be a surprise, and it is. See, they decide to send him undercover back to the same island. Wait, it gets better. He’s there to infiltrate the same gang who took his daughter to get him to leave before! And he looks the same! Not even a hat or a monocle or something to change his looks! This is why I say redub this thing again, put Riggs’ story up front and you have the best dog movie ever. THE ISLAND MONSTER becomes NEW LEASH ON LIFE. I hear the money truck backing up! 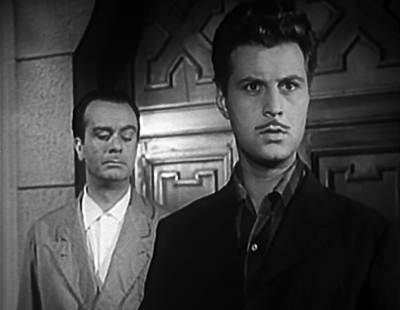 Stayed awake for the whole thing because hero dogs rock the house, and because this could be the perfect first slot of a double-feature with J-MEN FOREVER. Six wide awake eyes for this one. (One eye equals 15 minutes of runtime.)

John Ira Thomas writes graphic novels for Candle Light Press. One of them may star Riggs the Dog someday. For more Movie Somnambulist fun, check out the archives!