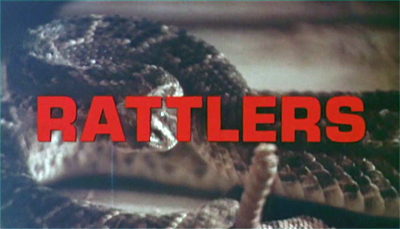 If RATTLERS can be said to have a subtext, as opposed to an excuse for dialogue in between screaming, then I suppose it’s gender politics. The trouble is, since this was made in the mid-70s, almost every tv show and movie at that time had a Wimmins Libber wandering through. If a woman was going to be one of the heroes and not just be a bare-breasted screamer, then there had to be dialogue about how there’s no reason she can’t go along with the guys. You should have some context: rattlesnakes are flipping out in California and biting the crap out of people. Tom the herpetologist is saddled with Ann the ex-Vietnam War photographer and they’re out to find answers. 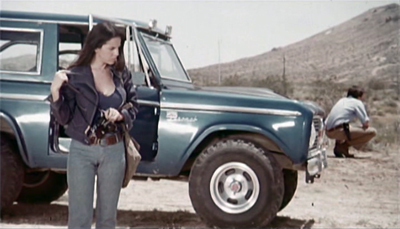 The answer is that there’s canisters of a nerve agent called CG3 (also called CD3 and CT3, depending on whom you ask) buried in a mineshaft; that’s making hundreds of otherwise live and seriously-don’t-bother-me rattlers seek out people to kill. Apparently the stuff is like the agent in the original version of THE CRAZIES--it essentially makes you batshit kill-crazy. The Sheriff hasn’t a clue, so enter Tom and Ann. Tom thinks Ann’s not up to it, even after hearing she was in The Shit with a camera in her hands instead of a gun; I would have had Ann ask about Tom’s college deferments and then call him a big Cheney, but that’s me. 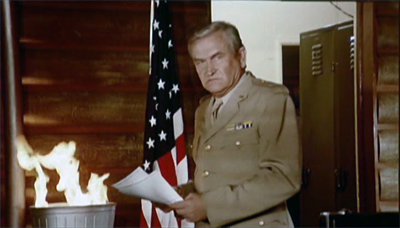 Ann does a good job throughout the movie, which actually shows some restraint when pushing her to her limits. Because let’s face it: Ann may be cool and all, but her job in this movie is to eventually get into bed with Tom. The way that’s done in a horror movie is to scare the shit out of her and have the male lead tap the fear tree with his penis. The events they use to rattle (ho ho) Ann would have worked pretty well on me too. I would have to sleep with Tom if chemically-pissed rattlesnakes went at me like that.

Intercut with the main plot are several classic bits of Horror Victim Calculus, scenes with characters who won’t survive the next jump cut. In the pre-title sequence, there are two families in a pair of camper vans out in the desert. There’s a mom, a dad, two boys and some other guy. The mom’s inside the camper doing dishes, the two adult men are outside on lawn chairs drinking beer, and the two boys want to go exploring. As we know from A BEAUTIFUL MIND, any calculus problem may have a number of correct answers. RATTLERS solves the equation looking for two dead boys, and so it is. They climb around the rocks and fall into a nest of rattlers. 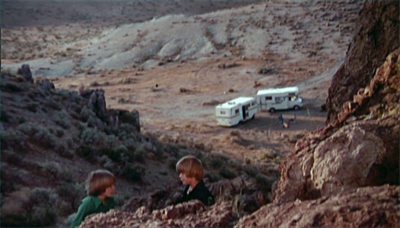 Let’s try another. Overworked plumber arrives after dark at the house of single divorced mother of two off-screen kids. The hot water’s out and she wants so badly to take a bath. Sadly, we must eliminate the gratuitous nudity variable; the only actual nudity in the movie is the desperate insertion of a centerfold being viewed by a glider pilot who survived an attack. The kids won’t turn off the tv and go to bed, so mom really needs that bath. RATTLERS solves this by sending the plumber under the house to fix a hot water problem after the plumber suggests the mom go ahead and heat water on the stove and have her bath now. It’s a good solution, allowing for sequential kills by getting the plumber first and having rattlers slither up the plumbing and popping out that little plate on the tub where the drain valve control is now. I have to give extra credit to the mom for flailing in the tub without revealing a key bit of flesh. That takes talent and the help of a decent editor. So, mom’s really talented, actually.

I am not big on nitpicking contextual details or simple poor choices in movies, but I found myself wondering at a few things. In an early scene there’s a professor studying a room of captive pigeons and instead of the normal coo-coo of pigeons, they chose to foley in the sounds of parrots. This becomes very clear when you hear them saying words. There’s a night-day-night sequence that takes place over 30 minutes in plot time. And there’s also 90 seconds of a different movie plunked in at the 67 minute mark. Well, that last one’s not fair. Tom and Ann are in it, but it’s really jarring. See, by minute 67, Tom’s tamped some of Ann’s Wimmen’s Libber talk way up in her (ho ho) and suddenly he announces they have to go to Las Vegas for nebulous plot reasons. 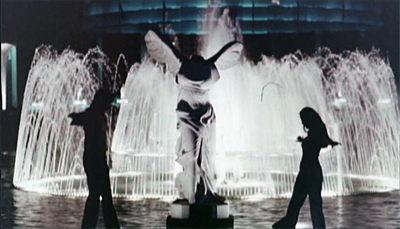 Actually, Tom could just be a genius, too. Sex in a tent is fun for a little while, but Vegas is Vegas. Over the 90 second visit there, they walk in front of a fountain, eat, dance, kiss. Then they’re back in the tent. The director just didn’t want to do a la-dee-dee-dum 70s lovey montage in front of a bunch of rocks, I guess. 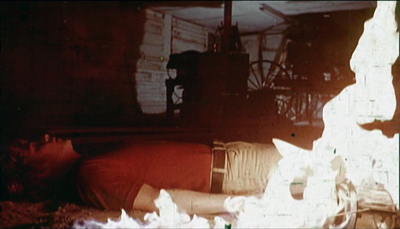 I actually like Ann a lot as a character. She’s very natural, has those off-beat good looks the 70s specialized in, and she even makes jokes about screwing other men just to needle Tom a bit. She kids about doing the mildly icky Corporal Delaney, the doctor of the military base that’s the cause of all this crap. Cpl. Delaney’s a drunk but okay guy; actually, he’s just like Hawkeye Pierce would be if he decided to stay in the Army into his 50s. Cpl. Delaney might have been drunk when a soldier died in his care, but base commander Col. Stroud is fine with that as long as Cpl. Delaney never ever blabs about the CG/CD/CT3 in the mineshaft. 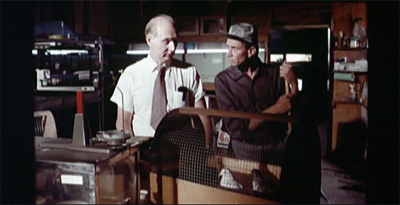 Any fool with a map can see that the mineshaft is the epicenter of all the attacks, and that fool is Tom. He even takes a ride in a military helicopter (which a soldier has to fly for him—such a Cheney) and the pilot lets slip about something buried in the mineshaft. Interestingly, after Tom confronts Col. Stroud about the mineshaft, the pilot successfully lies his way out of trouble. This is a big deal, as Col. Stroud later shoots Cpl. Delaney for talking about it again later. Nice work, pilot. 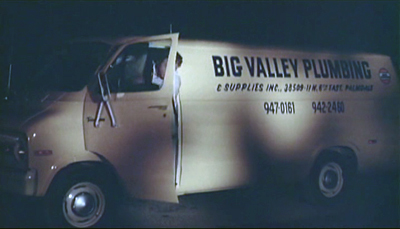 Oh, oh, oh…nearly forgot this awesome line Tom shouts at Ann early on. I paused the movie to get it all down. “Listen, sister. If it was my choice, you’d be sitting on your liberated ass back at the Sheriff’s Office, where you don’t belong in the first place!” Tom immediately apologizes for this, perhaps because he realizes that if he actually runs her off, he’d have to take a tightly-rolled sleeping bag out to Vegas for dinner and dancing instead. 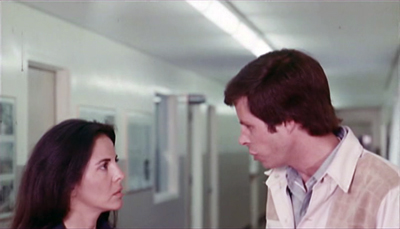 Several soldiers are bitten to death along the way, including a Horror Victim Calculus divide-by-zero moment where two drunk soldiers speeding along in a jeep at night are stopped by a flat tire caused by a rattler biting through the tire as they sped along. Then, as they change the tire drunkenly, the snake emerges from behind the flat tire to kill them. So either they happened to stop exactly over one, or this is the toughest effing rattler in the universe. I choose the latter explanation, as you have to keep sequel possibilities open. In fact, besides the one intentional sequel suggestion in RATTLERS, where Tom and Ann drive out of that hellhole a happy couple and then the camera pans to a hole in the ground with rattle noises emerging, there’s another. Right before Col. Stroud shoots Cpl. Delaney, there’s talk of canisters of CG/CD/CT3 being dumped in the ocean. Cpl. Delaney muses what the effect might be on whales or sharks. Cpl. Delaney is a smart man. Where’s the movie about raged-out whales? ORCA’s just one, and doesn’t count. 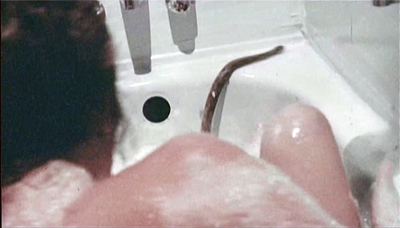 The plot grinds to a halt when Col. Stroud is killed in a firefight at the mineshaft. He gets one deputy, but another plugs him just as he was about to throw a grenade. Then, SPIES LIKE US-style, he drops it and sets off all the other grenades, sealing the shaft. Or, as they say, did he? 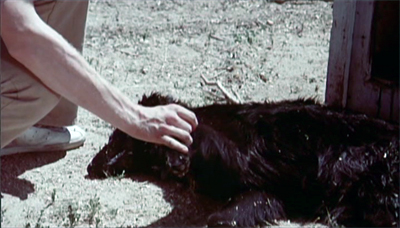 Stayed awake for the whole thing because I like a few problems in Horror Victim Calculus every now and then; also because Elizabeth Chauvet as Ann was driving me nuts until I looked her up and saw she was on an episode of A MAN CALLED SLOANE. Now that’s some lost tv for you! Six wide awake eyes for this one. (One eye equals 15 minutes of runtime.)

John Ira Thomas writes graphic novels for Candle Light Press. If little kids could have gone to Vietnam he would have shot himself in the foot with a rubber-band gun to try for 4-F.