THE MOVIE SOMNAMBULIST #7 – The Firing Line 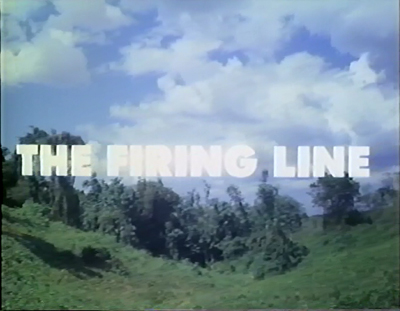 "The government used me. And now I'm gonna pay the fuckers back." -- Mark Hardin, explaining the plot in detail.

The 80s were a magical time for people who wanted to make movies about a vigorous foreign policy stance. Even if you made a terrible movie, you could get cash and opportunities for pretty okay gun battles if you switched from your original idea about three friends discovering their sexual identity through lives and loves at a coffee house to, say, three friends discovering their inner Chuck Norris by shooting a lot of brown people with an M-16 in each hand. There is, I submit, an obvious budget standard for these movies; it is extremely easy to spot and you can learn this trick in a heartbeat. The 80s movie you are watching costs at least half a million dollars if there is a helicopter in it. Plenty of movies tried to go action on the cheap without a helicopter and they are obviously much cheaper and worse off for this omission. But if you see a chopper, not just stock footage, then rest assured shit will blow up and lots of people will get shot. Hell, THE FIRING LINE even has tanks! 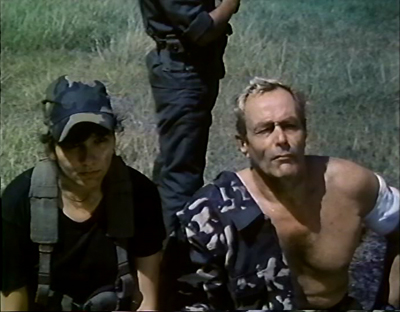 In an unnamed South/Central American country, you have some rebels. There always are. What it also has is Reb Brown (that's TV's Captain America to you, soldier!) and Shannon Tweed (that's oh God how I love her Shannon Tweed to you, mister!). Reb shouts his way through the movie with classics like "Up your ass" and "Hey, I just saved your butt!" Shannon's reply to the latter: "Great, just friggin' great!" Reb is Mark Hardin (tee hee), an American "military advisor" (tee hee) here in Santa Wherever to suppress the rebel forces, led by Rodriguez and Laura. In the opening six minute battle sequence (you know, like SAVING PRIVATE RYAN), Mark captures Rodriguez and a woman who might be Laura. His bosses tell him good job, now go away. So Mark goes back to town and meets Sandra (Tweed) in the hotel bar. He buys her a drink and this works great. She kids him by suggesting "Don't tell me you're a Communist Sympathizer" (tee hee). 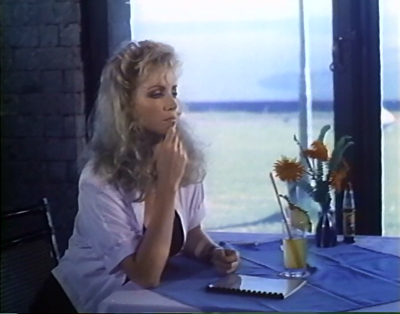 In defiance of almost every other Shannon Tweed movie, they do not immediately go have sex. There's no slow undressing, no careful sweep of hair covering what she's not actually doing with his--so anyway, not that movie. Mark bumps into a reporter who tells him Rodriguez is dead. We the audience know the woman is dead because nasty Col. Nunez raped and killed her. Col. Nunez is otherwise hilarious because although he's obviously a native Spanish speaker, when he shouts insults in Spanish he sounds like the Rosetta Stone version: "POO-TAH!" 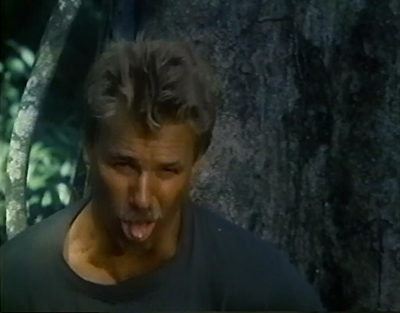 Angry, Mark confronts Col. Nunez and his own boss. Sure, Rodriquez and Laura are dead; but who cares? Mark Hardin cares, asshole. He brought them in to face justice, not a firing squad and Col. Nunez's cock, respectively. He beats them up, but he is arrested and interrogated and electrocuted. He escapes by beating up seven armed men with his bare hands and goes after Sandra. Mark Hardin knows how everything goes down in a movie like this. Of course, the next step is to arrest and interrogate Sandra's boobs, er, rather, to find out what she knows. This movie only takes up two opportunities to expose its female lead, so the mind can occasionally wander whenever she's on screen. 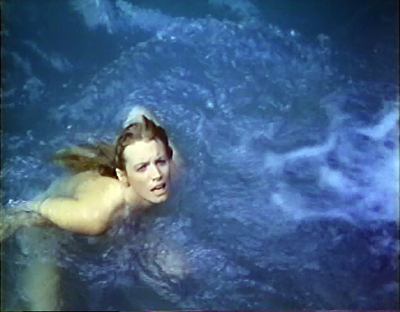 Off Mark and Sandra go to the rebels. They are not happy to see them, but Mark helps them fight off a Government attack and maybe gringo isn't so bad. The real Laura leads the rebels now. During another sneak attack, Mark and Sandra are trying to be quiet when a snake comes upon her. And, well, she wants to scream, right? Because she's a girl in a movie and that's the only response available to her. Mark shoots the snake, and this set me to thinking. Either this was an extremely good latex effect (and there aren't any others), or they shot the hell out of a real snake. This movie spent its cash on helicopters and tanks; I think it's a real snake. This got me thinking about budget in general. They could have traded the helicopters and gotten Henry Silva to be Nunez and Richard Herd to be the US military boss Milton and gotten a better movie, no doubt. Wait, maybe not. Henry was in ABOVE THE LAW that year; that's definitely a better career move. And Richard Herd was still on SIMON AND SIMON. Okay, keep the damn copters. 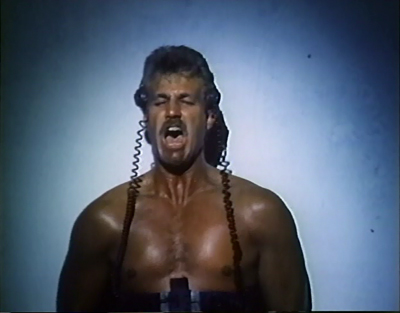 The soundtrack is classic synth noodling. It actually works at odds with the movie's vague point about government being evil, or something. The music accompanying the mobilization of government troops (and there's a lot of that) has a rousing theme that makes you think they're the good guys. The rebel theme is one of struggle and is frankly depressing. Let's not discuss the love theme. 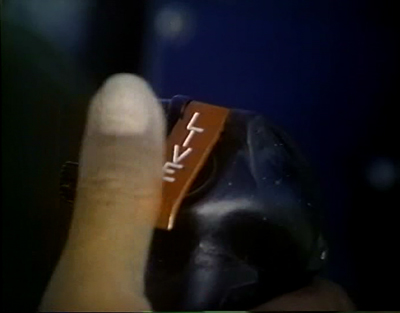 Mark Hardin never fails. There is no central struggle in the movie at all. Mark plans; Mark is awesome; Mark always succeeds. He rocks that mustache, so there is no problem too big for Mark Hardin. He even volunteers to be the arrested Wookiee in a ruse to shoot a lot of government troops. Government man Milton is built up as the man to beat; people shoot at Milton, big effing deal. He shoots back and you die. So when he and Mark Hardin meet at the end, they trade a little gunfire and Mark blows up a bridge and that's it for Milton. 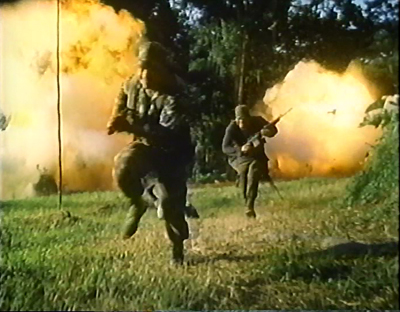 Mark only seems to grudgingly sleep with Sandra. Sandra swims naked under a waterfall, and this is great. One of the rebels, the obviously-a-turncoat Montiero, ogles her until Mark shows up and tells him to piss off. Mark says he'll watch over her, and that's all he does. It's only later, after she's killed her first man, that when she asks Mark to have sex with her, he does. They show this coupling from behind some rocks, as if we the audience are intruding. He puts Sandra on top of himself and then lies back as her head descends...and that's it. 80s military action heroes, even the cheap ones, are so weirdly chaste. If they don't look cool doing something, you don't see it. So what you do see are people dying by the dozen. In role-playing games you have non-player characters; in this movie you have non-character players. They stand around in a scene, only to get mowed down in the next. 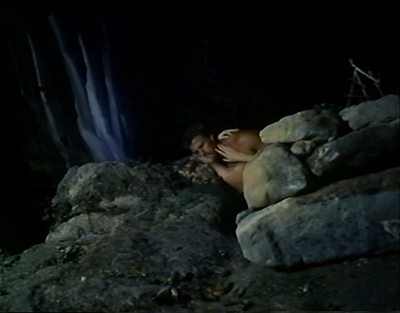 There's absolutely no endgame here. Even Mark isn't planning beyond the next raid. Twelve seconds after Milton goes up with the bridge, it's THE END. There are some great bits along the way. It turns out the woman raped and killed at the beginning was Laura's sister. Laura confronts the rapist; when she raises her gun, the panicked soldier yells "But we gave her great pleasure" and Laura shoots him in the nuts. Oh, and when the Governor and Milton play golf and discuss the country falling apart, the Governor says "Are you implying he's Christ-like, the People's Messiah?" 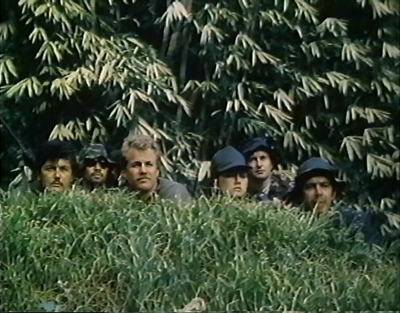 Stayed awake for the whole thing because a rebel army half-composed of women in black wife-beaters running around in a Shannon Tweed movie will keep you living in hope. Six wide awake eyes for this one. (One eye equals 15 minutes of runtime.)