Throw Out The Anchor

THE MOVIE SOMNAMBULIST #6 - Throw Out The Anchor! Throw Out The Anchor! was made in 1974 and was rated G, but its cheerful attempt to be utterly bland family entertainment would horrify the crap out of the kids of the 90s and beyond. You have the Jewish lawyer; the black preacher; the sorta-Asian looking guy who uses an Indian accent and talks about Hare Krishna (Harry Lieberman and Joe Krishna of the Acme Loan Company! No, really! He makes that joke!); the drunk sea captain; the drunk sea captain's wife, who looks and sounds like she escaped from a Ma and Pa Kettle feature. This being the 70s, we need a family with an absent but much-loved mother to make it go; here they're called the Porterfields: dad Jonathan, entirely bland teen son J.W., and hey, it's Alison Angrim (from Little House On The Prairie) as little Stevie! The Porterfields start the movie wandering around a nice looking marina; they ask about Cuppers Corners. Rich assholes get prickly about these inquiries, as they have plans for those creeps, drunks, and hippies at Cuppers Corners, by God. There's a lot of drinking in this movie; two characters are constant fall-down drunks and the female lead (Dina Merrill as Lindy) gets called on being an alcoholic and essentially accepts this analysis. There are a lot of sight gags involving diminished capacity and the cartoony consequences: falling. There's lots of falling. At the (let's call it) Asshole Marina, bland J.W. chats up Cindy, who happens to be the daughter of the rich asshole who has set the overall plot in motion already. She takes a shine to J.W. because he's the only male in the movie that's of comparable age that isn't black or Indian. Nothing whatsoever comes of this, plotwise. Nothing. 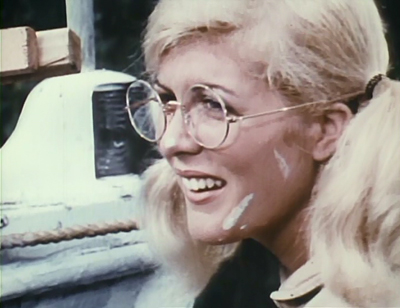 The Porterfields finally find Cuppers Corners. See, dad Jonathan paid up front for a houseboat to take the family on a nice adventure based on an ad in a magazine. He's here to get his boat. Well, old Captain Cuppers (played as if he were Jack Elam, but he surprisingly isn't) pissed away all his money drinking, and the only boats left belong to the colorful inhabitants of Cuppers Corners. There's the Jewish lawyer, Mr. Katz. His wife Sarah and he came down there 25 years ago and stayed. Sarah died a long time ago, though. There's Joel, the black preacher, who is only wearing the front of his vestments when we first see him. There's Hesh the University student of questionably Indian heritage. There's the Captain and his frying-pan-wielding wife. Oh, and there's Lindy. We meet Lindy after the frustrated Porterfields split up for the night and sleep in whatever empty beds they find on the occupied houseboats, Goldilocks-style. Jonathan chose Lindy's boat and he wakes up to see her putting her clothes on--remember, rated G. The folks of Cuppers Corners offer a deal--they'll restore a busted-up boat and let the Porterfields use that. Or, presumably, the Porterfields can go to hell. So they agree, and much bonding ensues. The finished boat is called the Egg Creme II in honor of a long boring story the lawyer tells Stevie. The family then takes off in the boat, leaving the rest of the cast behind. But they're back within a few days because they sighted pollution all along the river; they're outraged! So they swear to protect Cuppers Corners. What's gonna happen to Cuppers Corners? I mentioned a rich asshole earlier. So here's the plan as I understand it. Rich Asshole has conspired with the County Commissioner and the State (I think Florida) Highway Commissioner to build a road to nowhere, straight through Cuppers Corners. This somehow makes the land on either side of the road super-valuable--maybe like the motel that trapped Lucy and Ricky Ricardo in that one I LOVE LUCY. Maybe because stores on either side have twice the shot at customers when they find they have to double back along the same route? Well, some other rich asshole goes into cahoots with the County Commissioner to nab this very valuable land before Rich Asshole #1 can do it. This subplot is only important because of Lindy. See, Lindy doesn't wear a bra, but she's no wimmen's libber. She comes to Cuppers Corners to "dry out" (Captain's words, and he oughta know), but drinks all the time she's there. To her credit, her drinking never reaches the level of comedy, which actually now that I think about it makes her kind of a sad character; the violence that the uberdrunkards absorb makes it seem like they possess a superpower that Lindy just doesn’t have. Jonathan chases her and she's like quicksilver until he basically insults her about her drinking. She doesn't argue and just takes it, even after being all sassy before. Seeing his opening, Jonathan apologizes and boom, he's in her pants. Jonathan works in Public Relations back on Planet Earth, although for some reason he gets a telegram (presumably flown into the swamp clutched in the claws of a goddam swamp owl) firing him about halfway into the movie. Here's the thing, though. When she's not at Cuppers Corners, Lindy lives by the Asshole Marina and she's married to Rich Asshole #2, the one trying to put one over on Rich Asshole #1. She drinks there, too. To reveal what she finds out about her husband's plans to the good people at Cuppers Corners, she has to admit she's married. Jonathan isn't too troubled by this and they kiss some more. G. Rated. Movie. The Transformers animated movie got a PG for a "dammit" and this slides on by? The resolution involves Captain Cuppers sobering up very slightly to lead some extras on a mission to steal the dredge that's got all the road-building equipment on it. Bland J.W. goes along, but for some reason he has to be in blackface. Joel the black preacher sees this and wonders aloud why they need to blacken up a white kid when they already have A Black Guy. I think this story might be hilarious if Eddie Murphy told it. Holding the dredge and "a million dollars of road equipment" hostage, Jonathan confronts the County Commissioner, the State Highway Commissioner, the Lt Governor and Rich Asshole #1; the deal--sign a contract canceling the road project and you can have your road junk back. Astoundingly, they agree to this. Then, for reasons impossible to explain, Hesh the sorta-Indian guy accidentally blows up the dredge. Jonathan, ever the quick thinker, tells the assorted assholes that they wouldn't want word of this to get out, so don't sue or have us arrested or have hired goons break our kneecaps. To this they also agree. The whole movie is a faint echo of live-action Disney fare of the era, except no Kurt Russell or Cesar Romero or Joe Flynn or anyone you can stand. Well, actually, I think Joel the black preacher could have been used more; he's pretty good. If anything, I wanna know why he wears a male-stripper version of priestly vestments in the first reel. Everyone does as well as can be expected here; luckily, expectations are pretty low. The line from the movie that I had to write down: "May the gentle touch of moonlight hold you in an innocent state." Guess who said that one? Also, the production company card is the awesomest I have ever seen. Gaze deep into it. Stayed awake for the whole thing because Lindy's character kept getting more and more not-G rated; I was disappointed that when it was revealed to the viewer that she was married to Rich Asshole #2 that they didn't make her in on the whole deal. What a villain she would have made! I'm going to make a viewing recommendation: watch this as if Dina Merrill were a really terrible person in real life and was a total poop to all the other actors. There's lots of little unexplained reactions when she's on screen. Six wide awake eyes for this one. (One eye equals 15 minutes of runtime.)

John Ira Thomas writes graphic novels for Candle Light Press. He also thinks Jack Elam definitely would have done this flick for the same money the other guy got.