THE MOVIE SOMNAMBULIST #20: In Hot Pursuit

I’ve been spending the time watching my computer boot up wondering what IN HOT PURSUIT is about. It neither demonizes nor champions the drug-running of its heroes. None of the characters exhibit a single preference other than the avoidance of loss (whether life, money, those damn Watson brothers, or a house being towed down the road). Thirty minutes of screen time is spent on car chases, with at least twenty more spent watching vehicles calmly glide down the road. The only thing this movie is about is 90 minutes. It’s about ninety minutes. 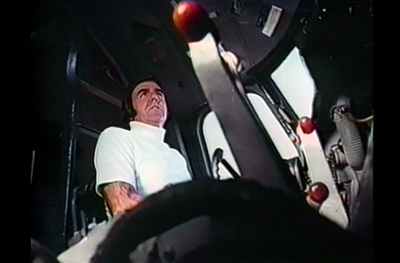 Our heroes are Oosh and Doosh. IMDB has it as Boosh—it’s Doosh. They are what appear to be real-life brothers playing brothers. They are the Duke Boys of pot in what must be Georgia. Their connection is Big Jim; Big Jim has a cargo plane and access to bales of pot. Oosh and Doosh pick it up from Big Jim and drive like hell to get it to Mr. King, their boss. This is the way of things; Mr. King is deposed off-screen at some point and Sandy takes over. He explains Mr. King screwed up too much and let’s just not talk about him anymore. 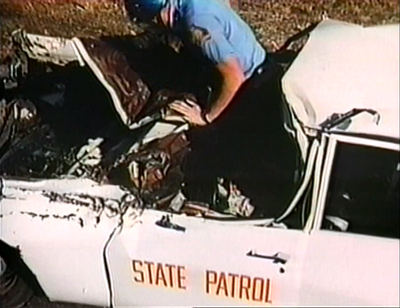 As a movie-watcher old enough to have seen actual car-chase movies on the big screen, it was a real joy to watch Earth physics at work here. Some good old boys assembled Helicopter Movie Money (one appears in the film and is used for coverage on all the chases) and made themselves a damn movie. They wrecked a lot of cars, a house, all kinds of things. I picture the discussions going something like this: “Let’s have us a sequence where we plow a semi through a house that’s been jacked up and is being hauled to another site.” “Okay, how we gonna do that? Special Effects?” “Whut?” “Like models, usin’ a model.” “Ain’t got a model. I got a semi and a house.” 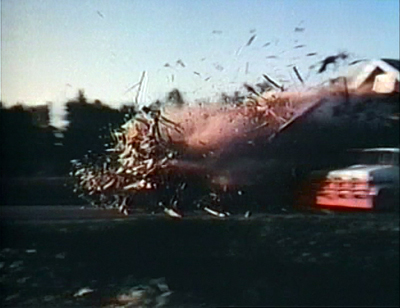 Everything they do in this movie, they just do it. Stop an armored car by sawing down a tree onto the road as a deadfall? Point the camera, I know just the tree. Ram cop cars off the road with a semi? Hell, all ya gotta do is goose em a little. More than one sentence of dialogue while driving? Well, what say we do them while stopped and do a worm’s-eye angle from the floor on those. They can’t read their dialogue off a card and drive, hell. The only two things they don’t just do are dialogue while driving, and throw actual dynamite on the armored car. 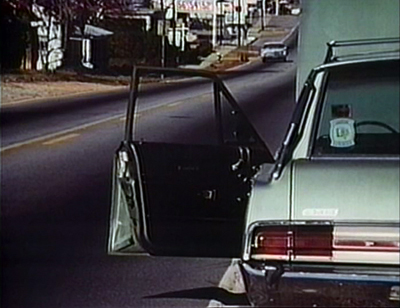 There’s some pretty great mayhem, if you haven’t been ruined by CGI. If you’ve ever actually driven a car, a lot of the crashes feel mighty real. In the credits there’s the all-caps brag: “NO STUNTMEN WERE USED IN THIS FILM.” Yep, Big Jim really flies the cargo plane; Oosh and Doosh really rip half their camper off when they sideswipe a bulldozer on a flatbed going the other way; the fat guy really does get handcuffed to what looks like a very angry dog. It creates a strange sense of realism: you’re watching fictional events enacted in the same way they are executed in reality to make the film; I doubt they even had to act out their surprise for most of it. Only when anyone talks does the reality fall away. You can watch everyone’s eyes and tell what dialogue is improv and what’s scripted. It’s 90% improv—go be mad that your house was destroyed; go be worried that the cops are coming; go smoke a joint and relax. 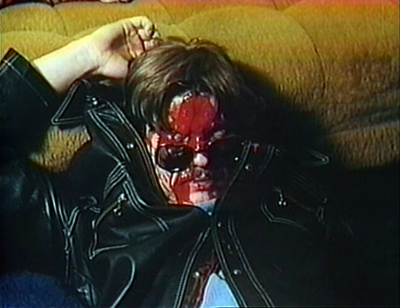 Easily the most amazing sequence involves the helicopter’s appearance. After the initial chase of the movie, our heroes are caught and put in jail. Doosh’s girlfriend visits and he tells her to have a helicopter land on the roof at a set time tomorrow. She goes to Mr. King and it is arranged. Next day, Oosh, Doosh and their two pals are on the roof of the jail fixing the HVAC; I would have loved to see a scene where they talk the Sheriff into that one. “Boy, Doosh, sure is hot in here.” “I hear ya, Oosh. If only we’d taken those HVAC certificates from the community college and made something of ourselves.” “Yeah, Doosh, we could have a legit job right now fixing what is obviously a loose coil up on the roof there.” 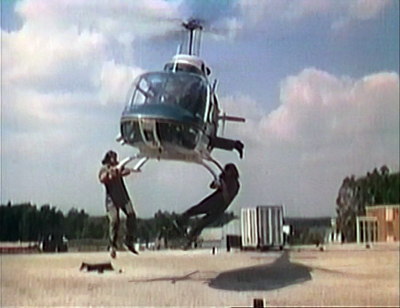 So they’re all four on the roof with a watchful guard when the chopper comes swooping in. They put it in a wide shot to show you they have a chopper and a guy who can fly the damn thing. Doosh conks the guard and the two pals pile inside, while Oosh and Doosh each hang onto a skid while the chopper takes off. In movies and tv, you always see an edit there. Cue another imaginary production meeting: “Now how we gonna show Oosh and Doosh hanging on the chopper to make their escape? Special Effects? Stuntmen?” “Ain’t got no special effects. Ain’t got no stuntmen. I got Oosh, Doosh, and a helicopter.” It looks really good. There’s really no substitute for hoping people transfer their concern for the lives of the actors into concern for the fate of their characters. That check will cash every time. 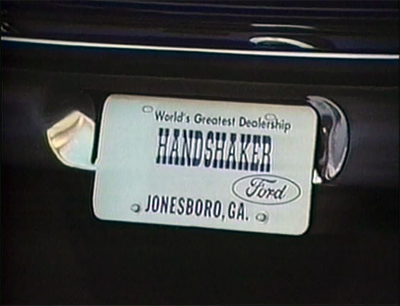 Plot, yes, the plot: if you insist. Oosh and Doosh are caught running pot. They escape jail and find their boss has been removed for failure to do something or other. Anyways, Sandy’s the new boss. He kills the helicopter pilot in front of Oosh and Doosh to show he means business. Then he sends them to pick up another load from Big Jim, a much bigger load. This occasions a chase in an 18-wheeler; but this time they succeed in delivering their load, despite kicking the crap out of the semi. Sandy tells Oosh and Doosh they owe him 150K in a week for the original lost load and for damage to the truck. They rob an armored car and get their two nameless pals killed. There’s Spanish guitar music on the soundtrack for this sad moment, but it’s drowned out by the squealing tires of Oosh and Doosh’s Camaro as they get the hell out. 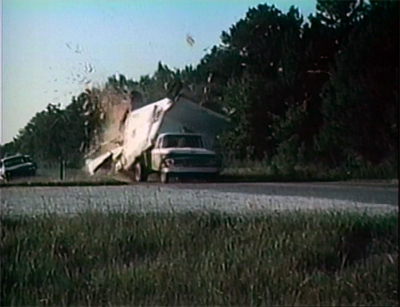 Then there’s the big score: Big Jim wants to do the biggest shipment of pot AND cocaine ever. He’ll give a quarter million dollars each to Oosh and Doosh if they will cut him a hilltop runway and provide enough trucks within three days. Oosh says that’s pretty easy for them to get a quarter million dollars. Big Jim and the script supervisor let this slide for different reasons (Big Jim doesn’t have to pay 250K each now and the film’s already exposed, respectively) and the boys set about accomplishing this. It goes well, except they couldn’t cut a long enough runway for Big Jim to take off, only land. So, one of the trucks and the plane get captured by cops. Sandy refuses to pay up, so Big Jim, Oosh, and Doosh rob Sandy’s house of a million dollars and fly off in Big Jim’s plane. I know, I know. But this they do. As they take off, credits roll. 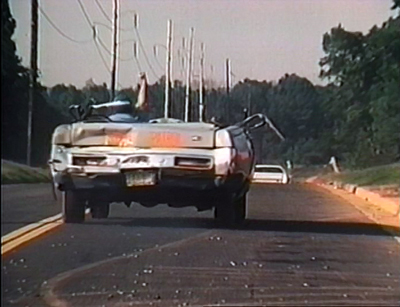 The only thing weighing this movie down is the comedy. It’s a Southern movie with car chases, and I know it’s required. They clearly put thought into every one of these caricatures, and they’re all here: the old farmer in an old Cadillac, his repetitive shrewish wife, the know-it-all who’s paid for good service hot-dammit, the nice lady whose dream of a new car has been thwarted, the sleepy hobo, all of it. Each of their vignettes has a minute or two of setup and a minute or two of follow-up. They are minutes spent not crashing cars. The funniest thing in the movie is a bit of a moving target, but it is whatever moment it really hits you that these jokers are actually doing this stuff. The helicopter escape had me laughing the whole time. I so badly wanted a Hong-Kong post-credits injury reel for this movie. 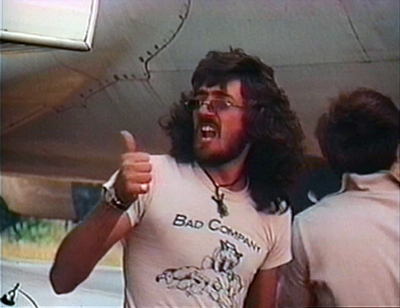 To its credit, IN HOT PURSUIT tries very hard to avoid pretending to be anything it’s not. There are women in the movie, but they are not presented in a way that leads you to believe that any of them play a role in the plot or that any of them will take their shirt off. The dialogue does the job; only a long radio newsflash really overplays the exposition card. The events are simple enough and are simply shown 90% of the time, proving that one other thing they had on hand was a sense of mise en scene. When you have only so many cars to crash, you learn pretty fast where to put the camera. There are no character moments attempted, so the whole deal gets by not so much on excellence as avoiding any potholes beyond shook-up old farmers scuttling to the outhouse while being harangued by the wife. It’s an easy movie to like. 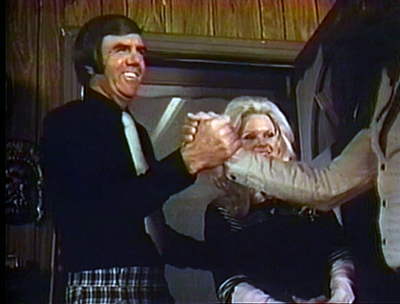 Stayed awake for the whole thing because they kept right on wrecking stuff. Six wide awake eyes for this one. (One eye equals 15 minutes of runtime.)