The Legend of Bigfoot

THE MOVIE SOMNAMBULIST #3 - The Legend Of Bigfoot 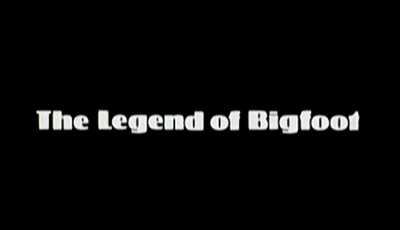 "Proof, and everything!"--Happy Harry Cox, EVERYTHING YOU KNOW IS WRONG 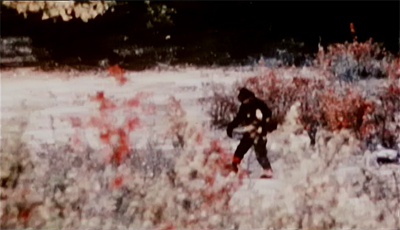 There's an old fallacy that goes like this: there's plenty of crazy shit in the world.-->One of those things could be Bigfoot.-->Therefore, Bigfoot exists. It's slippery because each of the first two premises are hard to deny. Then some jackass decides there's causal relation and here we have The Legend of Bigfoot. Ivan Marx was one of the guys that made Bigfoot such a mania in the 70s, with his alleged actual Bigfoot footage. Depending on whom you ask, this footage has been debunked, confessed to, or is totally real why would you ever doubt the reality of Bigfoot, maaaan? But this bizarre, lazy, telling construct that is The Legend Of Bigfoot is a perfect 74 extra minutes to load onto that original footage. 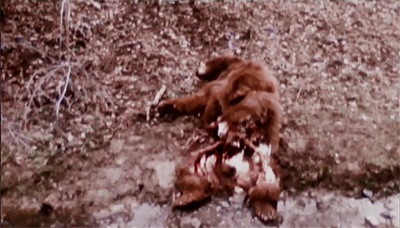 You've seen Marx's footage. Actually, if you were born after 1990, maybe not. Put down the salvia pipe and your Four Loko and trust me on this. Bigfoot was a legit topic of conversation in the 70s and 80s. Modern reality shows were still wriggling and squealing in their afterbirth, but shows like In Search Of pointed the way to true north on an amazing range of horseshit. Leonard Nimoy cashed his checks and intoned over Marx's footage that maybe there's a Bigfoot. And when Leonard Nimoy says it without laughing, you have to think about it a little. In this flick the narrator is Ivan Marx himself, no slouch in the voice-over department himself. The whole movie is largely POV handheld shots, except when the camera is presumably held by Ivan's with Peggy, who is rarely seen. Marx's story is told in the first person and solely in narration. Not one other person gets a word in. There's a reason for this. 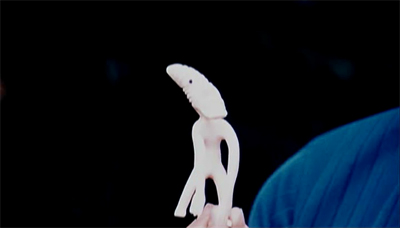 The whole movie takes you on the doubter's road to knowledge about our hairy pal. There are many points at which Marx chides himself for behaving in the exact wrong way every time he gets close to Bigfoot, or for inserting himself into situations where there's loads of proof that Bigfoot's real and finding that, say, the rain washed away all those fresh tracks he just found. Fate is cruel, and hoaxes have to be seamless. Two people who are not Ivan and Peggy Marx wrote this first-hand account, so the perspective is off at times, but in telling ways. Early in the movie, the script written about his experience by others reads "This movie is authentic". Not true, but having a truth-like quality. This is a perfect description. The perspective is meant to evoke the present at all times. The drama comes from all this footage meant to be in the now. So when assloads more Bigfoot footage is revealed in the movie, you're left wondering why he's been sitting on it. 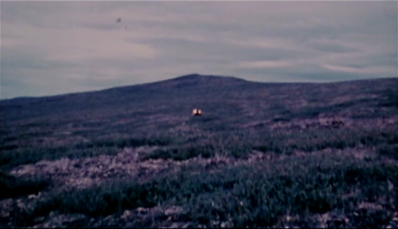 The arc for this story is part St. Paul on the road to Damascus and the riddle of what Bigfoot eats. You'll be glad to know Bigfoot's not a carnivore. So will your dog. Lots of doubt is expressed throughout the movie, but it's almost immediately erased by obvious assertions about the natural world. When we are subjected to several minutes of two chipmunks playing grab-ass on a tree branch, then one getting run over by a car and the the other dragging it off the road and helping it limp away...this reminds Ivan that nature is about survival. From here he reasons that Bigfoot exists because Bigfoot is an animal-->Animals survive-->Bigfoot exists because he survives because he hides so successfully from man. See what he did there? 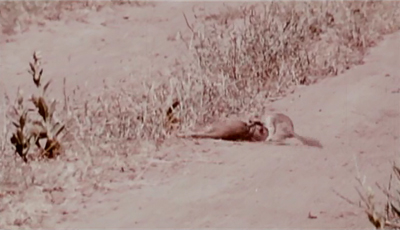 There's a lot of really good nature footage of actual animals in this thing. Those were the most enjoyable parts. If this had all gone down in the last five years, Marx would have an Animal Planet show and we'd be kicking ourselves that another undeserving a-hole with more drive than us willed himself into a career. But Marx had nowhere to ride that baby in 1975, so he made this movie. He was an actual hunter and tracker, and made his living by either troubleshooting errant Kodiak bears in Alaska or photographing a Cinnamon Bear for a client. He's that classic embodiment of the Hunter as Naturalist...I love animals, but some times they've gotta DIE BY MY HAND! 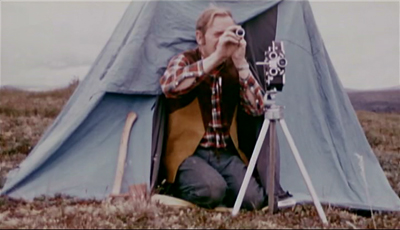 The Marxes travel all over the place looking for Bigfoot, even up near the Arctic Circle and back again. To pad the running time they linger on all manner of natural events, like moose mating and suicidal goats. Seriously. In British Columbia there are apparently goats that start eating dirt, lots of dirt; then they drink water, their guts turn to cement and they die. Ivan calls it "ritual suicide". See, Ivan doesn't draw weird rash conclusions, and he believes in Bigfoot so you should too! 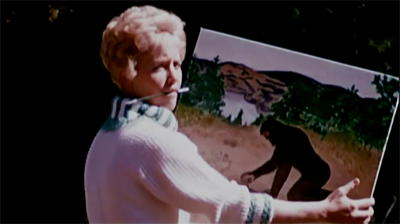 One of the more oblique Bigfoot encounters is up north. Marx performs a song that the "local Eskimos" taught him that brings Bigfoot a-running. In the distance, two bright eyes light up, really bright eyes. My mind jumped to the other Eskimo tales Marx heard about Bigfoot predicting disasters and channeling dead spirits; this isn't Bigfoot, it's the Mothman! From the Prophesies! The Mothman Prophesies? Right? Really, that one's not bad, go see that. Anyways, instead of investigating, Marx just stares and films until the eyes "disappeared behind a rainbow". That's a quote. The effing leprechauns saved Bigfoot. 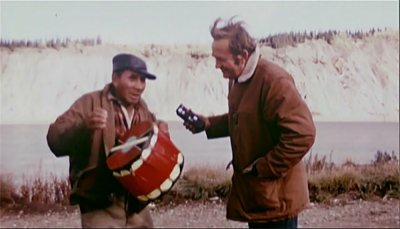 Much is made about scientists never being satisfied with his stories and footage. Marx scoff that "some" scientists "explained" his original Bigfoot footage by claiming it was a bear with polio who rubbed all the fur off his feet in rough terrain. He immediately tries to sympathize with these benighted science types by agreeing that we need to know more about Bigfoot. This cycle is repeated often throughout the movie. Eventually he's caught up in a fugue of internal and external frustrations that merely drive him all the harder to prove what he already knows to be right. Because despite all the expressed doubt and attempts at balance, The Legend Of Bigfoot relentlessly pushes toward the inevitable climax of proof! Loads of proof! Wanna see proof? Here ya go! 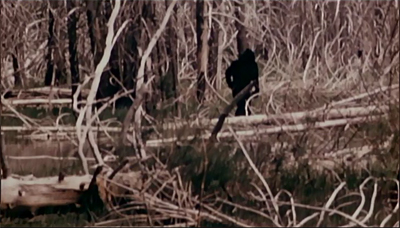 This guy saw the Fox News coming a mile away, too. Too bad he died in 1999; this is really his kind of culture now. I would kill to see this at a drive-in. In the reality where this isn't bullshit, it's a classic nature documentary, a victory lap for the Discoverer of Bigfoot. That said, one time on a beach Bigfoot totally did kidnap a guy in old-timey bedclothes. 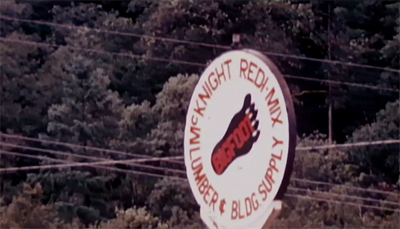 Stayed awake for the whole thing, so five wide-awake eyes (One eye equals 15 minutes of runtime.)

John Ira Thomas writes graphic novels for Candle Light Press. He also saw The Legend of Boggy Creek in the theater as a kid and it scared the piss out of him, so Bigfoot often shits in the woods of John's brain.