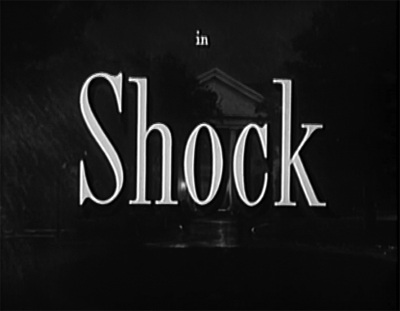 So far we’ve been dealing with drive-in pictures, but this time we’ve got ourselves an actual B-movie, with Vincent Price to boot. SHOCK is a psychiatry thriller, as well as a psychological one. It was made in 1946, when people knew what sanitariums were, but they didn’t know a lot about what went on in them. Psychiatry was relatively new to the popular imagination, so a scary flick about it all going wrong had a lot of punch in the forties, I suspect. The best parallel I can think of is this is like when THE HUNT FOR RED OCTOBER first came out and everybody learned a bunch of stuff about submarine warfare; SHOCK is like that, only the Red October here is Janet Stewart’s brain. 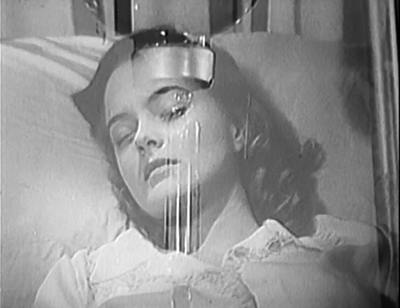 Janet has spent the last couple of years thinking her husband is dead; but just the other day she hears that he was a POW and he’s coming home! For reasons not explained, the only way she’ll be able to reunite with her husband is at a hotel in San Francisco; not, say, their home. But this movie works well on so many levels, I’m gonna give it a leg up here; perhaps she couldn’t afford the house as a poor war widow and had to move. Oh, and maybe the notice that her husband is coming back was sent by the Army, who is too busy emptying out the European Theater (1946, remember) to do more than say he’s on his way back. See, makes total sense. 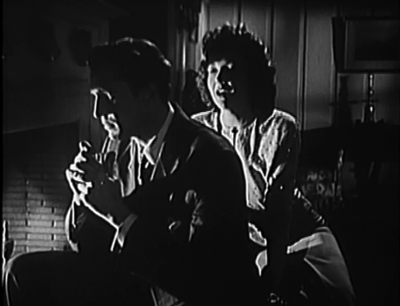 I’m willing to do this nice thing for this movie because from there on, you better get out of the damn way of the plot. It’s hard to guess the year that these movies went from using plot as the cheapest special effect to tits and boom-boom, but SHOCK is definitely not going to lift up its shirt at you. So, Janet arrives at the hotel first and finds there’s no reservation for her. After an opportunity to tell the hotel manager (and us) all about her husband Paul, they relent and give her one night in a room meant for a Mr. Ling. While waiting and fretting about Paul’s arrival, she nods off on the couch and has a pretty imaginatively-staged dream sequence. She hears Paul calling to her from behind a door. She runs to it but the hallway keeps getting longer, and she’s obviously running in place but screw it, it’s a dream, right? When she reaches the door, the knob is huge; you can go Freudian on this if you like. The imagery sure seems deliberately Freudian at times; but you can never be sure about that. Freudian imagery has us so nailed that it’s hard to think around it. Example: in a surviving Ancient Greek dream interpretation manual, a dream where you’re having sex with your mother means you have mastered a craft. Congratulations! 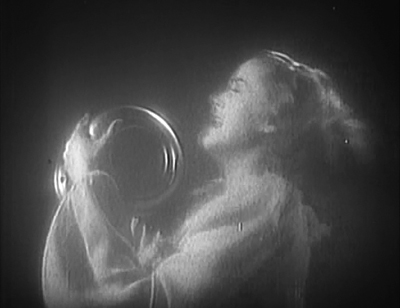 Janet wakes from the dream and wanders around the room and out onto the balcony. Suddenly it’s REAR WINDOW at a distance of ten feet. Unseen by its occupants, the corner-facing balcony has some drama visible through the window. Janet sees a man talking divorce with his wife; the wife is actually never visible. Things get rough; the wife threatens the husband’s career, words are exchanged and he kills her with a candlestick. And you thought that Clue game was bullshit, didn’t you? 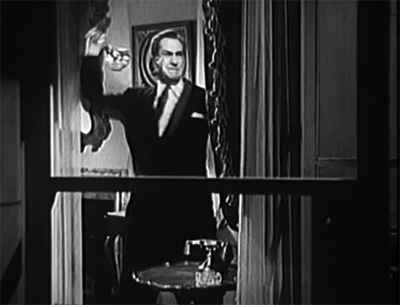 Janet flips out, staggers back to the couch, and that’s where her husband Paul finds her. She’s in…wait for it…SHOCK. Cue a swell of violins. A doctor is summoned. He hasn’t a clue, but that’s ok. There’s a really good nerve doctor that has an apartment in this very building. He’ll call Dr. Cross. If you don’t already think that Vincent Price is the murdering husband and the great nerve doctor, go back three spaces and lose your turn. 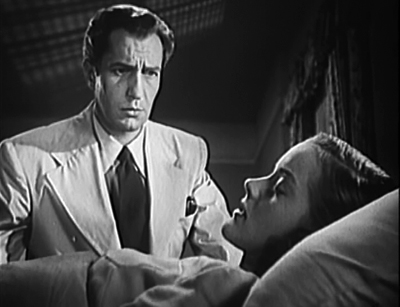 So: in a great sequence, Dr. Cross arrives genuinely wishing to help this poor woman. But as he looks around the room for signs of what might have put her in a state of shock, he sees that Janet’s balcony has an awesome view of his room. More pieces fall into place and he’s sweating. But Janet’s not saying anything, yet. An idea forms: he’ll offer to take Janet to his private sanitarium and take care of her. His plan is more humane that you might guess, but it’s still pretty devious. He’s simply going to make her crazier by hypnotizing her and traumatizing her to the point of amnesia. Some folks would just kill her; Elaine, for instance, would do that. Elaine’s a nurse at the sanitarium and is the reason Dr. Cross wanted the divorce. Elaine will play ball with the amnesia thing, but only if it works. 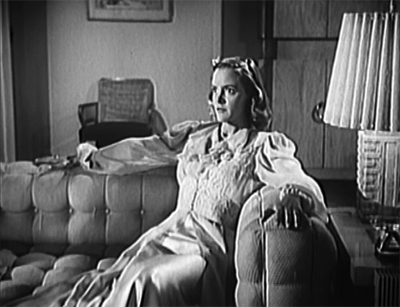 It works right up until a very creepy sequence with an old man patient and a thunderstorm. He nearly strangles Elaine to death in front of Janet and she flips out in a more active way and starts talking about how Dr. Cross murdered his wife and she totally saw it. Husband Paul hears this and asks Dr. Cross what it means. This, I love. Even now, we defer to doctors on more than we should; and this is a hilarious and true moment. “The doctor killed his wife, I saw it!” “Gee, doc she just accused, what could that mean?”—the mystery is swallowed up by the therapy and all it takes is a little deductive ju-jitsu on Dr. Cross’ part to have Paul thinking this is just part of The Crazy. 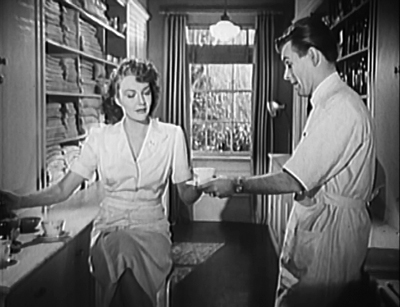 The amnesia trick isn’t going to play out, but that’s all right. The more Janet accuses Dr. Cross, the nuttier she sounds. This is especially because Dr. Cross had successfully squirreled his wife’s body out of the hotel in a trunk that he had sent to his mountain lodge. A few days later, he tosses the body down the mountain and, voila, an accident. In the movie’s most inspired bit of evil deduction, Dr. Cross comes tantalizingly close to convincing Janet she’s crazy by showing her the newspaper article about his wife’s death while climbing. Since the body was found after Janet went into the sanitarium, Dr. Cross cleverly conflates the date she was found with her death date and asks Janet how she could have witnessed a death that occurred after she was admitted. That’s one slick adulterous murderer. 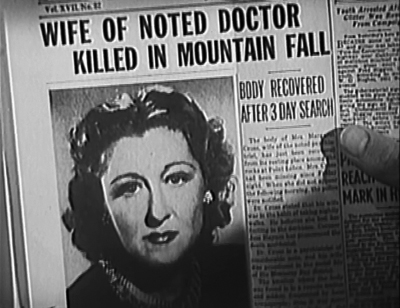 Price plays the role with a lot of regrets, though; this makes the whole thing much niftier. The doctor in him wants to help people, but he also wants Elaine pretty badly. Elaine has a deathgrip on Dr. Cross, so she doesn’t let any of his doubts go unchallenged. Eventually, the DA office in Monterey sorts out that Mrs. Cross was killed with a candlestick—they found wax and bits of silver in the wound. They would never have found it if it weren’t for a neighbor woman who was attacked and robbed by a tramp, and the DA thought maybe Mrs. Cross’ death was foul play. There’s enough plot here for two movies. 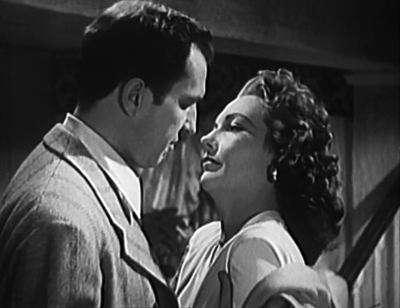 Ultimately, the DA is ready to burn the tramp for Mrs. Cross’ murder, but Janet won’t shut the hell up. Crazy or no, it’s a lot of coincidences piling up, and O’Neill the DA’s man doesn’t look like the kind of guy who will take a doctor’s word for things. There’s loads more to this plot to this point, really enjoyable stuff. The movie has the DNA of the Universal monster pictures from the establishing shots down to the musical cues, even if it is a 20th Century Fox production; it looks like CITIZEN KANE next to the previous nine Movie Somnambulist entries. Vincent Price is great in this, even if he is young and dashing, which frankly seems all wrong. 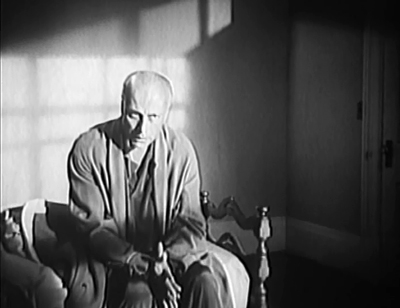 The end is a good twist, and since I only spoil mysteries, not well-built thrillers, I’ll let it go. Okay, Cross decides to kill Janet therapeutically with a series of insulin shocks. Paul and another doctor figure out what’s going on and race to the sanitarium. Cross has second thoughts about the fatal shot. Elaine goads him into it and he injects Janet. Then he has, I dunno, third thoughts, and tries to save her. Elaine wrestles with Cross and he ends up strangling her to death. Hell of a whoops there, but it’s effective. The other doctor shoots Janet up with adrenaline and all is well. Cross insists on finishing his dictation for Janet’s case before removing his doctor jacket, putting on a suit coat, and willingly walking away with O’Neill, the DA’s man. Crime doesn’t pay, see? 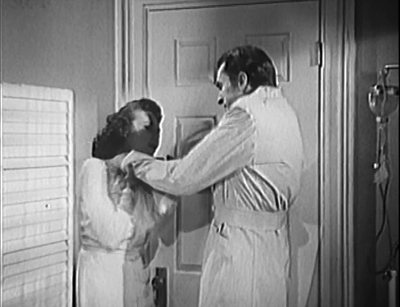 A note to the young: yes, it’s in black and white. Yes, a lot of the dialogue is purely plot-driven and declamatory. Yes, at the character level the difference between Paul and O’Neill the DA’s man is that O’Neill wears a hat. But watching SHOCK you will experience something strange—you will notice all of the elements of this movie are working together. True, this is because it was made in the midst of a sprawling studio complex with armies of actors, artists, and craftspeople. The purpose of this movie’s existence was to fill 70 minutes and not to let the bad guy get away with it (plus make money). But this movie is good anyway; it’s good for what it is. 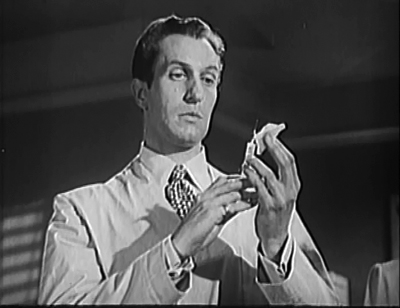 Stayed awake for the whole thing because there wasn’t a second of this thing that wasn’t carefully planned, and that’s a joy to behold in a humble thriller. Five wide awake eyes for this one. (One eye equals 15 minutes of runtime.)

John Ira Thomas writes graphic novels for Candle Light Press. The sex with your mother dream thing is from Artemidorus Daldianus. He also says dreaming of kites means you are afraid of robbers. Now you know.