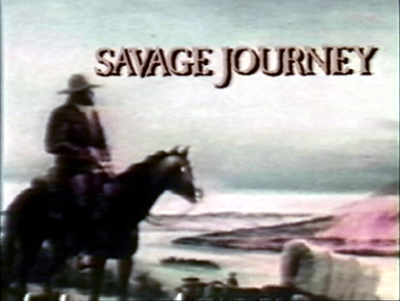 Like many of the films selected to be the first fifty I review here, SAVAGE JOURNEY is a heavily edited re-release. Unlike the other truncated epics (see SLAVE OF THE CANNIBAL GOD for instance), the original movie was released here, as was the first attempt at an edited re-release. It’s the story of Brigham Young, supermormon. It was originally released in 1977 as BRIGHAM, then cut and released again as BRIGHAM YOUNG in 1978, and then in 1983, with thirty-six minutes heaved overboard, we have what is surprisingly not called BRIGHAM YOUNG, MORMON; it’s now SAVAGE JOURNEY, an attempt to take the most exciting stuff and turn it into something to watch in between attempts at unhooking Heather’s bra at the drive-in. The result is the most passive-aggressive cowboy movie ever. 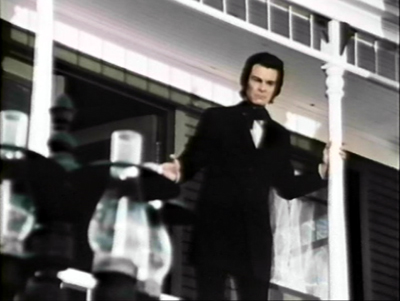 I frequently approach these movies by recounting the plot mockingly; but to do that here would really be a straight-up attack on Mormon history. Even the Mormon Literature Collection at Brigham Young University finds much to fault with the movie’s chronology, though, and quibbles about details that only Mormons could possibly give a shit about. And while history is an interest of mine, Comparative Lit lies closer to my soft, vulnerable heart. So let’s try one of those oddball comparisons that the cool kids like. It turns out that BRIGHAM CHRIST SUPERSTAR here shares a lot of DNA with NIGHT TRAIN TO TERROR. 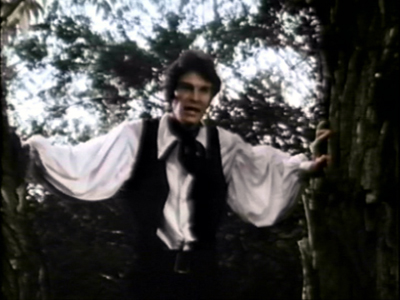 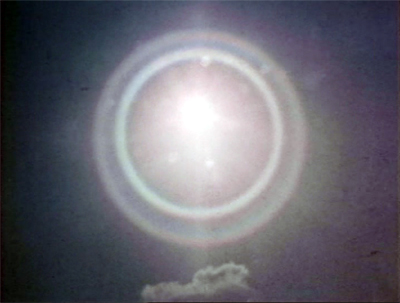 See, Samuel is an atheist. He shows some kindness to Brigham Young when he’s out being a lone missionary. His wife Claire totally digs this new religion the most, and she gets Samuel to move down to where the Mormons are in Ohio just in time to hear that they’re moving on. Everywhere the Mormons move, Claire drags Samuel with her. He starts successful businesses that he has to abandon, and it gets on his nerves. Eventually he says he’s not going, and Claire leaves. Samuel follows because he loves his wife. Then, one night after an opera or something, Claire holds her stomach and dies. I blame Opera Nachos; those will kill your gut. The next day Samuel tells Brigham that he wants to join the church and that his biggest regret is that he and Claire couldn’t get remarried in the church. 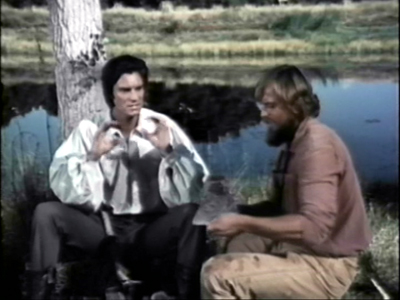 Brigham’s got the answer. They’ll have a ceremony where Samuel can remarry his dead wife. They’ll just use another woman as a stand-in. Brigham adjusts the language of the ceremony to refer to this literal ghost-runner as “Maryann as Claire”, as in “Maryann as Claire, do you take…” and so on. Samuel the atheist’s arc is this: he’s a decent fellow who treats people well, but he’s not a believer; eventually he is forced to become a believer because of a mountain of regret; the Mormons treat him nice anyway. Of all the villains portrayed in this movie, and there are a lot of them, none of them have anything approaching a villainous rationale. The movie is so bent on using pat generalizations of ontology and cosmology that the bad guys talk each other into committing Mormon massacres by using pretzel logic like “well, we are not the Devil, so they must be. Come, let us destroy the Devil.” They’re not portrayed as mean or evil, just mistaken on a level that would have eight year olds and Logic professors united in their amazement. And SAVAGE JOURNEY’s greatest hope is that everyone who was mean to them remembers how nice they were and how they should feel terrible about it but that’s ok we accept you. 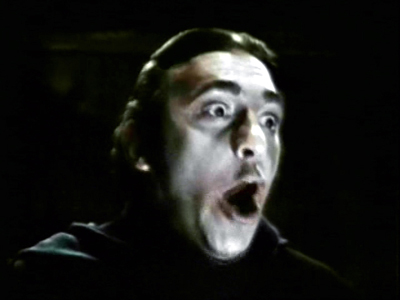 The scene where Joseph Smith is taken to jail by soldiers (he smashed and burned the presses of an anti-Mormon newspaper in Nauvoo, IL) has a bit where Smith prophesizes that there will be an American Civil War. I half expected him to say “A new technology where events not present are portrayed for all to see. In one of these, you will be portrayed as being mean to me. It will portray you as simply not being Mormon enough to like me. I hope you’re happy with yourselves.” At the end of the movie, Joseph Smith and Brigham Young stand in a field while wearing all-white tuxedos and tails, looking over modern Salt Lake City and patting themselves on the back. That’s not Mormonism winning; that’s Busby Berkeley winning. 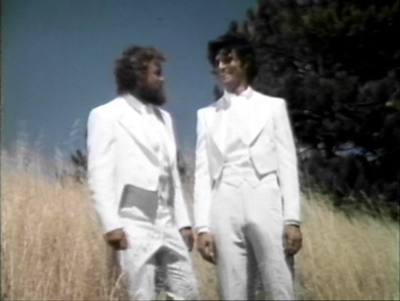 Okay, actually there’s a better example of the massive wrongheadedness of the villains in general. The opening scene is Joseph Smith being pulled out of his home in the middle of the night by an angry mob. They haul him into a central area of town, where they have an oddly low hangman’s noose arranged. Maybe they didn’t realize Smith was being played by Richard Moll, who’s as tall as a tree. So they rip open his shirt, put him on his knees, and put the noose on him. There are yells of "kill him!" and "his cosmology is defective!" or something. The ringleader of this bit of fun shushes everyone and says there are too many people around to kill him. That’s because there are too many people around to keep it a secret. He says this out loud. Two things: even if you wait and kill him later, you just pissed in the well by saying this in the first place; the other thing is that now that you’ve chosen to tar and feather him instead, why will people keep that secret instead of murder? This movie so badly wants to have suspense and action, but the Mormons will not defend themselves in any way that movies recognize. You ride at these guys with guns blazing and they’re simply going to tolerate it and love you. This is why those Rapture flicks from Jack Van Impe are so awesome; fundies don’t play that. Expect return fire with those guys. 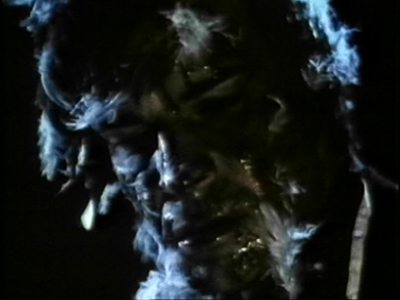 For the record, I have had two experiences with Mormonism and the hatred thereof. I used to use the genealogical resources of the local Mormon Church here. Mormons are very big into genealogy, because not only will they remarry you from beyond the grave, but they will take entire family trees and re-baptize them after the fact into the Mormon Church. As a result, Hitler and Buddha are now Mormons; that’s a no-shit deal. Anyways, the stated rule of the Family History Centers is that they will not proselytize you while you’re there. What they don’t tell you is that they literally mean that tiny room is conversion-free. The maze of corridors from the front door to there are totally fair game; once you were inside and in the open, they were this relentless form of nice. I dodged a lot of Mormons in my time, let me tell you. The other thing is a Greek dictionary I bought in my grad school days in Texas. It was a really nifty older one that belonged to a priest. The only note I ever found in it was next to the Greek word mormos, which means “beast”. The note said “proof Mormons are beasts!!” Yes, he was so excited at this discovery that he used two exclamation marks. So maybe the movie isn’t wrong about some people using dumbass and misguided logic to hate them. But imagine that being the motivation of a bunch of cowboys willing to murder families. 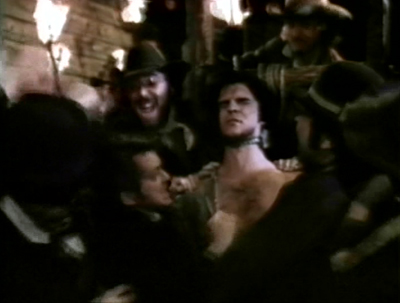 The polygamy issue takes up much of the last chunk of the film, as the makers seemed to feel that this was the big sticking point for most non-Mormons. Much is made of the rule that the first wife chooses all the rest of the wives, and of Brigham’s initial reluctance to have more wives. In fact there’s quite a bit of pantomime along the lines of “Two wives? Why one is plenty! Why me, O Lord? Ho ho ho.” A smile and a shrug and I guess I gotta bang twelve women now. I’m not trying to get into a religious fight here; I’m wondering why the movie decided to sell it like that. SAVAGE JOURNEY seems almost painfully aware at how hokey its version of things sounds and ends up making things worse. 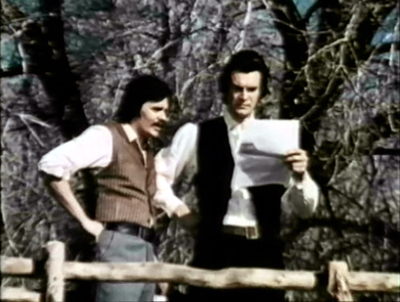 Late in the game, after they’ve arrived at the Great Salt Lake, the Mormons have trouble with the local Jewish actors dressed as Indians (including Marc Lawrence from THE MAN WITH THE GOLDEN GUN). More massacres occur and the US Army shows up. They corner the Indians in some mountains and Brigham goes to talk to them to get them to surrender. The Army colonel is another perfect example of the cardboard badguys that populate the movie. The colonel makes a smarmy reference to soldiering being the world’s oldest profession. Seriously? The only reason to say that is if you’re in a movie where you exist to be the very softball thrown at the lead so he can bunt it out of the park (that’s movie physics at work, folks!). Brigham tells him that it’s almost the world’s oldest profession, colonel, but the two are very similar. Ho ho ho. 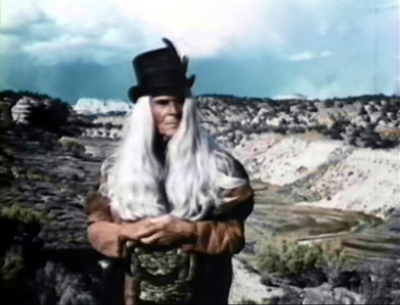 The bad guys in this movie are less than one-dimensional. They are singularities, character beats with no dimension. I suspect they’re a result of not wanting a single thing in the movie that might seem like the least bit credible response to Mormonism. That’s a work-for-hire pitfall. I’m sure the director and writer got a lot of notes from the church all the way through. I was pissed that there wasn’t even a reference to how their own new world testament supposedly came about. Now that would be a movie. I know it isn’t in the 36 minutes cut out for this version; the BYU Mormon Lit Collection says the climax of the original BRIGHAM was “a vicarious temple sealing ordinance”. I now know what I’m not going to do with any of the remaining units of 36 minutes of my life. 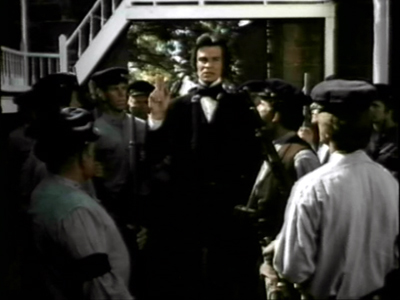 Stayed awake for the whole thing because I kept feeling like I was falling into a universe where the Wonderful World Of Disney tackled Mormon massacres. Seven wide awake eyes for this one. (One eye equals 15 minutes of runtime.)

John Ira Thomas writes graphic novels for Candle Light Press. He also found out during research for this review that two parts of NIGHT TRAIN TO TERROR were already full-length movies—CATACLYSM and CARNIVAL OF FOOLS (aka DEATH WISH CLUB). Yes, he just ordered them. For more Movie Somnambulist fun, check out the archives!