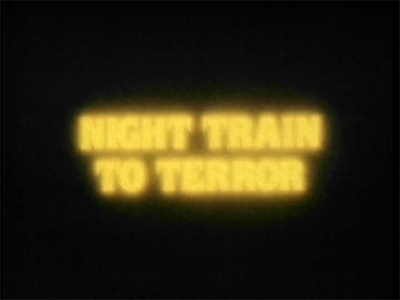 God and the Devil are on a train heading for the death of a bunch of musicians. If we are on another train headed toward the death of ninety-eight minutes of our time, at what point will a bunch of death-obsessed freaks zip themselves into sleeping bags and wait to see if a wrecking ball will land on them? The answer to these and many other questions will be revealed in the second story of NIGHT TRAIN TO TERROR. When we last left the movie, that damn band was still singing the same song. The sax player just sits there, not having blown a single note. We know the 80s; that guy gets a solo. And a solo he shall have. In a compartment looking out onto a field of stars, God (credited “as himself”) and Satan (credited as “Lu Sifer”, because “Lu Cifer” would have been too on-the-nosey) take up the second case of the trip, the story of Gretta Connors. 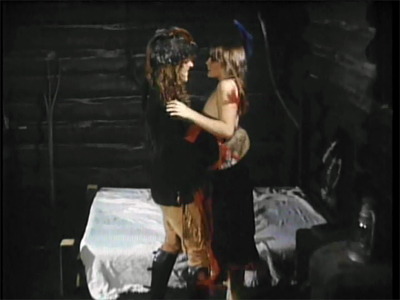 Now, how’s this for a turn: said movie is watched in a frathouse by Glen, a med student who happened to drop by for old times’ sake. While his frat brothers are practically jumping up and down at watching some sex and having a few brews, Glen is transfixed by Gretta. A detail this movie gets absolutely right is the frat brothers do not sit even remotely close to one another while watching porn; frats know Accidental Gayness can strike the unwary. Glen’s sudden attachment is at once creepy and sweet. The movie could go in either direction with nary a complaint from me. Glen seeks Gretta out and finds her playing piano in fishnet stockings at Mr. Youngmeyer’s club (even though the song playing has no piano at all in it). 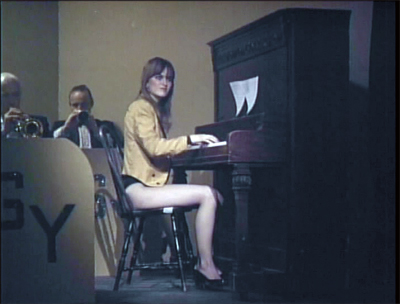 There are elements to this story in which the movie is completely uninterested; one of them is how Glen won over Gretta. One moment it’s Glen watching Gretta play for the first time, then she’s in some complex undies playing a different piano in Glen’s apartment. He sits next to her and they kiss. Got it? Glen won her heart. Moving on, Mr. Youngmeyer is busy swearing revenge on this punk kid med student. How on earth did he manage that, anyway? There are no debatable points in the plot; things are done, and that’s it. Interpretation is not an issue. 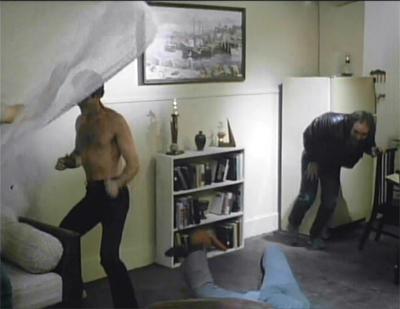 Youngmeyer hatches a plan that apparently has two goals: 1) to kill Glen and 2) to make a total OJ of himself in the process by being so circumstantially involved in Glen’s demise that everyone will know he’s guilty. But it takes a man who really understands himself to look at this situation and think “I really want revenge on that bastard! Hey, I hang out with a bunch of death-worshipping freaks; if I get him to join in on our death-freakiness, who knows what might happen to him?” Interestingly, one of those death-obsessed freaks is Gretta. 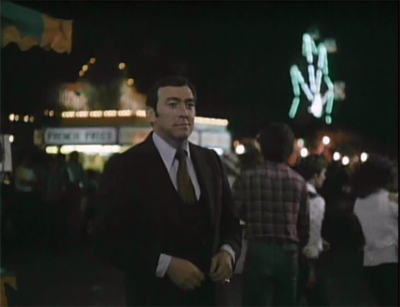 The Hemlock Society was already taken as a name, so Youngmeyer’s pals are refreshingly called The Death Club. There’s the Contessa, some gabby German/Russian guy, a black guy in Sunshine Band gear, Youngmeyer and Gretta. It’s possible she wasn’t already in the Death Club, but that’s a murky point already left far behind by the plot. Either she was already a member (because while Glen is quizzed about membership requirements, Gretta is not), or she easily sank back into Youngmeyer’s gravitational pull and he wasn’t about to screw that up by challenging her credentials. So Glen comes along because Gretta goes. 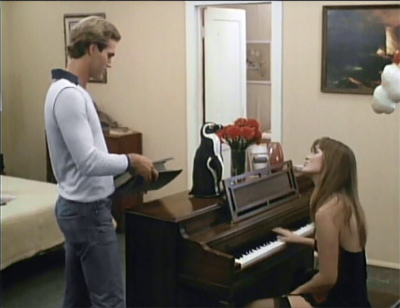 Death Club meetings are pretty exciting. When Glen and Gretta turn up, the members announce they’re doing something special. See, to join the Death Club, you have to have had an adult near-death experience. For some reason, childhood ones don’t count. Of course, Glen only had the childhood experience, but Youngmeyer wants Glen to have a near-life experience right away, so this is tabled. For this meeting, everyone is going to put themselves at risk for death that very evening. That’s not the special part. The special part is how they risk their lives. First they bring in a HUGE Tanzanian Winged Beetle in a bottle and unstopper it. Its sting kills, and it only stings once. There’s another wrinkle to it. 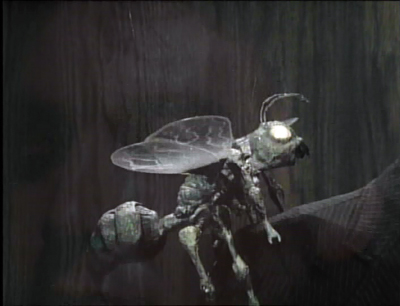 The beetle is our first solid encounter with the stop-motion animation that really starts to take off in the third part of NIGHT TRAIN TO TERROR. It’s a crazy, lumpy-looking thing; but since its head isn’t shaped like a fist, like all these new 3-D monsters seem to be, I am happy to see it. Since presumably the Death Club has been meeting for a while, they have something of a safety valve to keep membership from necessarily dwindling by one each meeting. The big-ass beetle will sting anyone if they move or react, so what they do this case is they leave the window open. Glen points out that if the beetle flies out the window, then some other poor jerk will die instead. Ha ha ha, Glen’s such a prole. 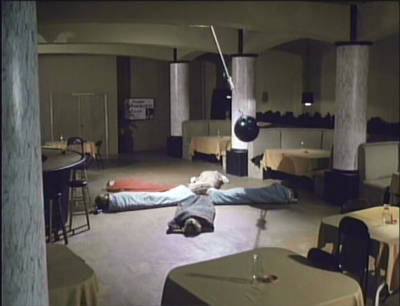 See, when Glen asks about the open window, the obnoxious German likens it to the empty chamber in Russian Roulette. Except you don’t leave one chamber empty in Russian Roulette; there’s one bullet. Russian Roulette with five rounds in the chamber is the Elimination Round. So they release the beetle and it stop-motion flies around, but mostly it’s POV beetle-cam dive-bombing views of the scared/aroused participants, who are digging the hell out of being close to death. The beetle is some curious stop-motion animation. It’s pretty cool, but the effects guys went a bit far and tried to do a shot where the beetle lands near Glen’s hand for a minute. Glen’s hand and arm are clearly made of putty, which leaves you feeling like the channel suddenly changed. The beetle looks great, though. Anyways, the beetle leaves and stings some guy in the woods who was just trying to have some sex with his girlfriend. His face explodes. 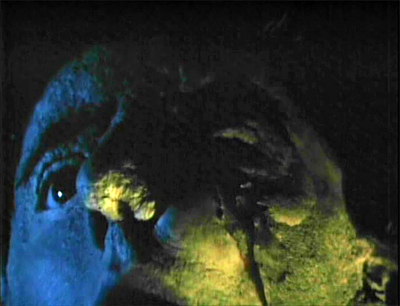 Glen and Gretta come to another Death Club meeting, only to be strapped in with everyone else to a computerized multi-seat electric chair. There was a rule about some lights that I didn’t catch/care about, but before the big shock lands on someone, some people get random little shocks to ratchet up expectations. The German misunderstands the rule about the lights and cheers that he’s the one to die when he isn’t. They have an empty chair set up to be the ghost runner here, just like the open window before. But someone’s got to go this time; per horror movie rules, the black guy dies. This is also a pretty good and prolonged effect. 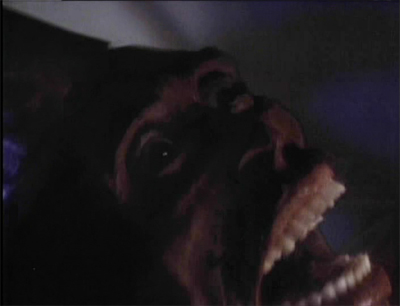 Gretta acts like she’s really into the Death Club in that scene; in fact she plays it like she’s irreversibly bye-bye mentally. But Glen tells her this is all insane and she quits the club. Youngmeyer wants another shot at Fate taking Glen, so he has goons drag Glen and Gretta back for another near-death game. It doesn’t go his way again and the Countess gets her head flattened by a wrecking ball. Cut back to the train; the porter tells us Glen and Gretta lived happily ever after; that’s it. There is breakdancing on the train this time. There’s also slow-motion breakdancing. Plus the singer does a credible Worm. 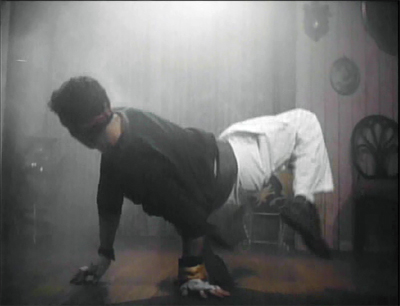