THE MOVIE SOMNAMBULIST #23 – Treasure Of Tayopa 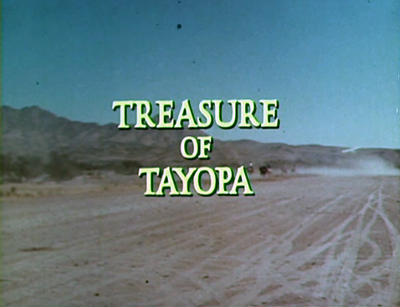 Here’s the thing that bothers me about X-marks-the-spot treasure hunter movies: no matter what the seekers do, no matter what level of hell they endure to get to the gold/radium/Ark of the Covenant, they always come across some dude who basically lives over the hill from the thing. And no matter how reasonable the explanation, I can’t help but wonder if that guy knows a much easier way to civilization, a way that perhaps the seekers could have taken too. “Well, let’s plot a course through the Hills Of Hairy Death, take a left at the River of No Return and scoot through the Perpetual Brushfire Mountains to get to the Seven-Eleven that has the last chance for Slurpees before Mount Doom.” What it is, is mission creep. Think about the other patrons in this Seven-Eleven/Pony Express stop/Restaurant at the End of the Universe; they’re just here for the Slurpees/their mail/the Daily Special that wants to be eaten. Their plan was to go there, a mundane place for them; hence, a mundane plan to get there. You definitely don’t see someone traveling alongside the gold-seekers through eight days of hell to buy a horse. But a treasure hunt movie is all about character; that’s why they take the shittiest route imaginable. If you knew of seventeen tons of gold over the hill from your local Seven-Eleven, you’d be less likely to kill your friends for it. Even if you went all Daffy Duck about it, each of you could take as much gold as you could carry and there’s still plenty. But if you go through some dee-luxe crap to get there, every sharing lesson you picked up on public television disappears like a fart in the wind. The quest here is for gold and silver mined by the padres of a mission in Tayopa, Mexico. Apparently they ran afoul of some Indians who had a burial ground right there and there was a predictable massacre. This is told in a cartoon/cavepainting style sequence where the camera shifts and crossfades itself silly over one sheet of drawings. The background is provided by Gilbert Roland, billed here as Host/Star. He narrates a bit at beginning and end, on camera with a glass of wine. It’s very effective, and could have been used throughout to even better effect. Instead, the rest of the narration is provided by Catherine, the leader of the expedition to Tayopa. It’s very breathy stuff, as if the word “ACT!” was flashing in big neon letters in her head as she spoke. 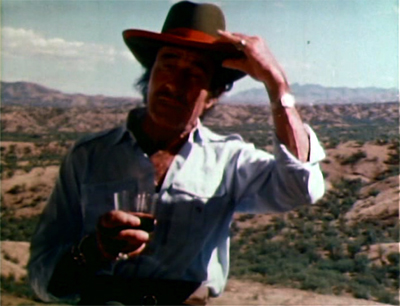 Catherine does get some classic lines, though. “We are a group; yet we are strangers.” “I feel the seeds of tragedy are sown among this group.” Personal fave: “Alone? ToGETHer? You FOOL! LET me GET my clothes!” Catherine is here to finish what her father started. She’s hired Tom the sensible guy, Felipe the dim and somewhat reliable guy, and the asshole who always wonders why the cops beat him up all the time guy Sally. Tom’s a classic monotone and Sally overacts like he’s trying to fill three parts in this thing. The scene where Tom tries to talk Sally out of riding back to start trouble with a group of rowdy locals had me crying laughing. Sally is all offended that they bumped his horse and touched his hair and he’s just spinning reasons like the grinning troublemaker he is, and Tom keeps saying the exact same thing over and over: “Sally, leave the Mexicans alone!” Sally carries a small crossbow. You know there’s a line: “It’s silent; it’s accurate; it’s deadly; and it’s my friend.” Its bolts also turn into full-size arrows when it comes time to show one buried in someone’s back. We first meet Sally at a cockfight, and this feels right. Sally is all the seeds of tragedy Catherine was talking about above. He forces Felipe to help him kill the Mexicans Tom was talking about, rousing the ire of their leader, who was off doing something else when that happened. The leader stalks the group for a while, stealing their horses while they sleep and forcing them to walk three days to more horses. He watches Catherine swim naked in the river, then that’s about it. His horse goes lame and he loses them; he then spends the rest of the movie tracking them and only finding everyone once they're dead. There is talk of a curse, and Catherine wears an odd snake-shaped silver bracelet made of Tayopan silver. Early on she claims this is the source of a curse on her family, and when Sally flips out and takes it from Catherine after he thinks he killed her in the river he decides it’s a totem to protect him from the curse. No curse is actually realized in the movie. All their woes are their own or engineered by the mysterious cowboy that Sally and Felipe screwed over. And that’s fine; that’s the truth of it. There are a few long musical montages that push the movie’s runtime over 75 minutes, so they must have an artistic purpose of some kind. Anything over 75 minutes isn’t really necessary for a drive-in movie. Anything over 90 minutes and they better be painting the screen with boobs and/or guts. The songs are full of flamenco strumming and worthy thoughts like: “I took a train trip through the valleys of my mind”; “Cushioned by my memory, the past went rolling by”; and “Our lust for gold will not rest; we survive to pass the test.” That last one is the start to a DragonForce song if I ever heard one. There are lots of 70’s natural lens flares and circles around the sun, and there’s snakes aplenty. Two real rattlesnakes get killed in this thing. Tom kills one with a pistol, and I have to add that along with his comforting monotone and good advice, he has a solid pistol stance. You want Tom to survive this thing; he polices Sally well and knows the score generally. The tragedy of Tom is his unwavering commitment to Democracy. Seriously. When they wake up to find their horses gone, Tom looks at the ropes and says they were cut. He advises they go back, because they can always survive to try again; plus, it’s much shorter to go back than ahead. Catherine disagrees. So, Tom says let’s put it to a vote, and asks two greedy dimwits to vote on gold or no gold. They vote to go ahead and Tom abides by majority rule. There will never be a movie where the Tom character says “That’s awesome; you kids have fun being dead”, goes home, and reads with feigned shock about their fate in next week’s newspaper. The other snake is killed by Catherine with a rock. Things have fallen apart by this point. Sally’s killed Tom and Felipe and thinks he’s killed Catherine after trying to rape her. After watching Sally try to rape Catherine, I can only imagine he gave up because he was sure it had something to do with her arm and he got frustrated and bashed her head in. Anyways, Catherine had already crept up on Sally and did him in properly with a huge rock. When she saw the snake, she went for her proven kill-move and smashed it with another rock. Then there’s a long close-up of her gutting the snake, and it’s too gooey to be a fake. Then she eats raw snake guts and wanders on. She ends up dying of exposure, but not before a mysterious padre appears with a canteen. She drinks and collapses. Cue Gilbert Roland. He intones solemnly that such is the fate of the greedy. But it is an assload of treasure, seventeen tons, to be exact. This is mentioned twice with no explanation. “Who knows, Seńor? Maybe you will try and find Tayopa. Or maybe it will be me? Who know?” I didn’t misspell that last word. The Mexicans in this movie frequently shift into cartoon Mexicans, particularly the ill-fated gang that are killed by Sally and Felipe. They say theengs like “Ay, caramba!” and “Let’s keel them and take the seńiorita!” Oy, vey. TREASURE OF TAYOPA is a pretty good movie for a drive-in. There’s not a lot of plot, so you can pay as much attention as you like. It’s decently shot, and leans very hard on this fact to cover for its actors. Anything they didn’t have to say, they didn’t. Any explanation they could shove into a voice-over, they went for it. It minimizes the negatives pretty well. Sally is fun to watch (except when they didn’t realize his balls were hanging out in the bit where he’s watching Catherine swim naked in the river), and, even though they didn’t mean it that way, having the vengeful cowboy play exactly no real role in the last reel was a good way to fiddle with expectations. Stayed awake for the whole thing because there were lovely little nuggets along the way like Tom saying he found Felipe and Sally in “the backwash of life”. Six wide awake eyes for this one. (One eye equals 15 minutes of runtime.)

John Ira Thomas writes graphic novels for Candle Light Press. He has never jumped up and down on a pile of treasure yelling “No! No! No! Mine! Mine! Mine!” For more Movie Somnambulist fun, check out the archives!