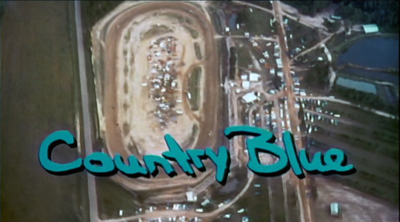 The one investment that any crappy movie can make to make you wonder if it isn't up to some Art after all is a good Director of Photography. If it's shot well, even the worst choices are up for consideration as deliberate artistic impulses. I'm even sitting here wondering what the hell the title means. The truth is very simple. Jack Conrad, the co-writer, director, editor, and star, thought he could make a naturalistic redneck failure plot that would win us all over with location shots and and almost verite style in some scenes. Two things work against it: the lame-ass chases and the dubbing.

To pick on the acting would barely count as being snarky. Of course the acting doesn't work; either you have actual actors who seem to have been told to just pile on local color without adding anything else, or you have the two leads, who are only acting when they're speaking. The rest of the time they're waiting for the other person to stop talking so they can do some acting too. It's like they're in a radio play. Much of the dialogue appears improvised around one or two redneck-isms per scene, like "Whatchoo wanna hear me play?" "Yank my doodle, it's a dandy." "Yank my...Heh hah! My daddy used to say that." The rest is crosstalk or obvious awkward silences occasionally overdubbed in post-production. "We were both in jail. Know what I mean by that?" 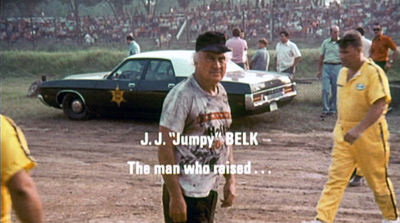 The setup is that Bobby Lee Dixon is a massive failure at life. He really has no idea how big. He's set up in the early scenes as a great driver of certain illegal items, but when the movie's four car chases occur, he clearly sucks at escaping the cops. A lot of the problem is how the chases are shot. It's hard to convey speed on film; you wouldn't think so, but it is. This is why in other movies a lot of chases are shot at a distance or with the aid of a camera car. All the chases here are are shot POV with cuts to views of the drivers through their windshields. They look like they're doing thirty, tops. It made me miss Oosh and Doosh from IN HOT PURSUIT. "You found me in the bargain basement, but I'm gonna take you to the top of the penthouse." 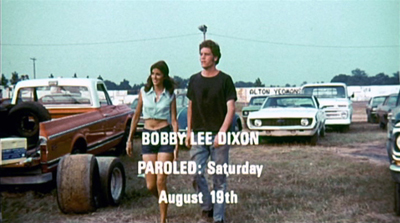 Chase One is after Bobby and Ruthie rob the bank in Havana, GA and a lone police car goes after them. They pull up by a house, then hide in the woods. While the cop gets out and looks around the house, they steal his car and get away. At best, a C-minus. Chase Two is after they rob a convenience store; they go until the cop just isn't there anymore, as if they'd stayed around the corner long enough in a Grand Theft Auto game and the cop just lost interest. That one's a D. Chase Three starts when Bobby and Ruthie try to cross the Georgia state line; they are met by state cops blocking the road. They pull a u-turn, roll a couple hundred yards and abandon the car, only to be immediately captured. That one gets an Incomplete. Chase Four ends with a move by the editor to make the cloud of dust they obviously throw up making a hard turn on a dirt road disappear in time for the cop car to miss it utterly and go the wrong way. That's an F. 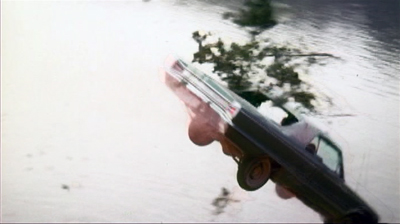 All this chasing occurs because Bobby wants to get a divorce for his girlfriend so they can be together. He's a couple days out of jail and decides that robbing a bank is just the ticket. Ruthie resists a bit, but goes along in that way that so many screen redneck girlfriends have gone before. "Bobby Lee loooooves me!" Fine, then; rob a bank, why don't ya? So they do. Later, after having weird chaste embrace-y sex in a swamp, they discover a newspaper, I dunno, discarded by a damn frog, and it gloats about how the bank suckered Bobby and Ruthie into thinking they didn't have much money. Well, Bobby can't stand that, so they go back that day and re-rob the bank. "You puke-suckin' maggot!" 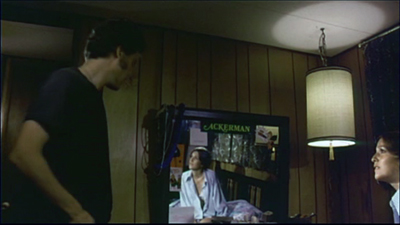 Okay, I have to double-back and talk about the sex. This is another weirdly chaste movie that clearly wants you to think there's a lot going on. I can see the temptation for a star/writer/director; it's totally within his power to be in a scene with a naked girl, so why the hell not? After the first bank robbery, they horse around in a lake and Bobby slides Ruthie's dress off, then removes her bra. They kiss. He lifts her from the water and turns to give us a bit of the view. Him being fully clothed to this point is fine. But then they're embracing on the ground, rolling in ecstasy and bits of grass; he's kissing his way down her sternum. Passionate faces abound. It just keeps on going with Bobby fully clothed and Ruthie with her dress suddenly back on and bunched at the waist. Then there's a crossfade to after and he's still got his pants on. I'm not arguing to see a guy naked; the juxtaposition is just weird. Is it a power thing? Did he think he didn't look good without a shirt? Is it not adultery in Georgia if you keep your pants on? "It's not inside of me to do that!" 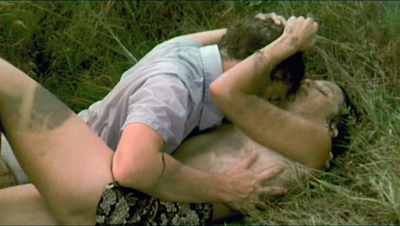 There are some long sequences in this thing; there's a lot of panning across nature. There's a lot of walking. There is almost no exposition, which is kind of refreshing, actually. There's a lot of riffing on redneck topics of conversation; the commitment to color over content is so powerful that several character introductions are done with freeze-frames and title cards. There's a lot of shots of some seriously economically depressed Georgia towns. Every effort is made to take the load off the actors; even during some of the longer staring sequences, there are a few full-on inexplicable freeze-frames to preserve a worthy look by actors who are mostly looking around like confused birds. You keep waiting for any of it to mean something, because the chases suck and even the goofy redneck with the EX-LAX t-shirt isn't all that entertaining. 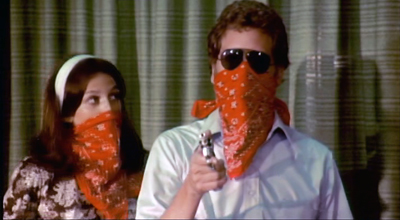 There's even a jailbreak sequence that utterly fails to excite. The shootout where a couple people get shot in the face is okay, but the best bit is the direct result of Bobby's appallingly bad driving and judgement. Bobby's zooming off-road with Ruthie and Arnita, a nice old lady who wanted to give Bobby a job running cigarettes from North Carolina, but he had to go and rob a damn bank. They're tearing cross country and Bobby's talking about the plan where they go to the coast and hop a shrimp boat to Mexico. Ten seconds after this brilliant plan is uttered, they fly off the bank of the Appalachicola River and the car sinks without a trace. For a second, I thought this was completely awesome. 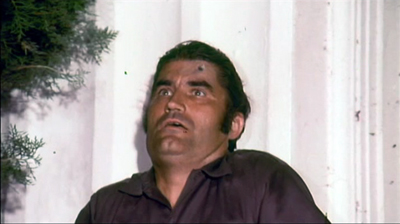 What an ending that would be! The river just swallows them up and that's it. Then Bobby surfaces and I despair that I've just witnessed another of what passes for an action sequence in this thing. But nobody else surfaces. Yep, he's killed the love of his life and the nice lady who broke him out of jail. It's a pretty solid piece of redneck failure. He cries a while then drives off into the sunset in another stolen car. 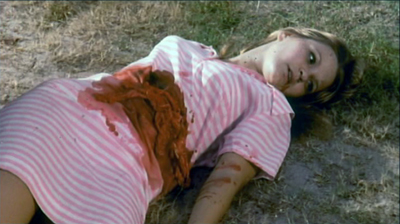 This movie actually would have been better as a downloadable add-on to Grand Theft Auto--GTA: Valdosta. All the chases are like mini-missions where you just have to drive outside the flashing circle of police attention without being seen for ten seconds and the chapter's over. All the exposition happens while characters are driving somewhere. It's a threadbare plot with long setups. The women don't survive. That's completely GTA. 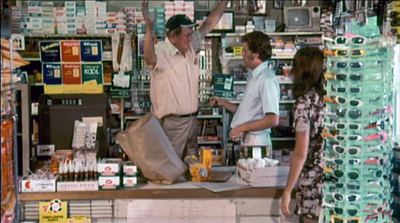 Signs of life do appear in the movie. When Ruthie is tossed into the cell with the very gay and the shut up I'm totally not gay ladies, there's a real energy in the performances. If Ruthie had busted out with the two of them, that would have been a great twist. The awesome title track is a nice sugar shock: "Country old/Country blue/Easy Growin/Country high/Far and wide/Easy Flowin'/Country boy/By my side/Easy knowin'/Country blue/I'm comin' home/Country blue/I'm coming home to you/Country smile/Country mile/Easy rangin'/Country star/Country child/something something changin'". Amazingly, there is a single shot done from a helicopter, so there was some money in the movie. Plus, if you like that website with the pictures of people at Wal-Mart, this movie is for you. 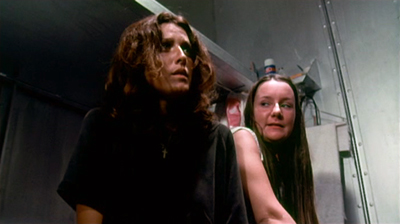 Stayed awake for the whole thing for no damn good reason. I kinda resent this movie. If you're not actually gonna be Art and you promise some car chases, then you damn well better deliver. Actually it was worth it for the few seconds where I thought everyone died in the river. Seven wide awake eyes for this one. (One eye equals 15 minutes of runtime.)

John Ira Thomas writes graphic novels for Candle Light Press. He also would have used the one helicopter shot for something besides an overhead shot of a damn racetrack. This the the thing with auteurs; there's no-one to tell them to save it for one of the car chases. For more Movie Somnambulist fun, check out the archives!