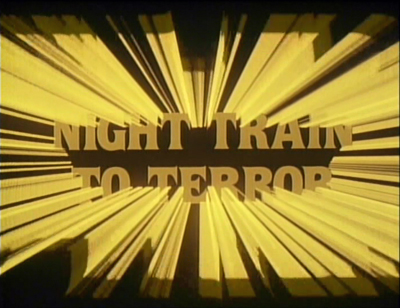 The train is called both the Heavenly Express and The Devil’s Cannonball. One of those names is much cooler than the other. On it, a band larger than Madness and not half as good have been singing and dancing their way to their imminent deaths in a fiery train crash known only to the train’s staff (who are impervious to such piddling concerns) and God and Satan. God and Satan have been sitting in a private compartment determining the disposition of souls who have been through some unusual circumstances; there was the guy hypnotized into rooferizing women to be used as med school gross anatomy practice, and there was the young couple that joined a Death Club. Don’t even try to keep score; as Jack Bauer always said, “There’s no time!” 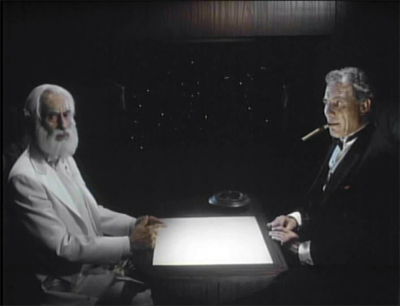 Case Three packs a lot into its confines. Ready? Claire Hansen is a surgeon, a Catholic (therefore having a big metaphysical advantage in this movie), and is the wife to James Hansen (Richard Moll again!), a Nobel Prize-winning atheist whose big new book, GOD IS DEAD, is about to drop. Mr. Weiss is an old man who’s an amateur Nazi-hunter who lives across the hall from Lt. Stern, a cop. Mr. Papini is a defrocked monk with a 666 burned into his chest because he claims to have confronted the Devil. Mr. Olivier is a young rich libertine who is apparently the satanic version of the Highlander; he never ages, and he’s at the center of all wars. Oh, and the Demoness Ishtar is also running around in human form. 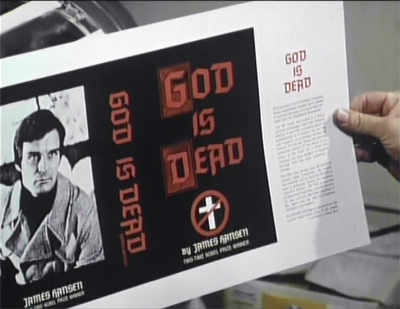 Claire’s dreams are our path into the story. She dreams of WWII-era Nazis dining like Vikings at a long table while a clearly concentration-camp string quartet plays for them. Another Nazi enters, tells them that they haven’t met their quota yet. He has the string ensemble gunned down, says that should do it, and leaves. These dreams disturb Claire. Old Mr. Weiss first appears to us while he stares in disbelief at the television. We see the Nazi from Claire’s dream in modern day, at some televised charity thing. Mr. Weiss recognizes this man, and underscores the point by going to his giant wall of newspaper clippings (those are gone forever from movies, now, aren’t they?) and circling the man’s exact likeness in a picture of a Nazi dated 1944. We are prepared to believe this connection, but other characters are skeptical. 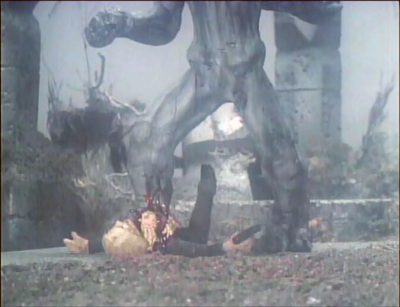 Mr. Weiss dashes across the hall to get Lt. Stern (Cameron Mitchell, toning it down a little) to go arrest this man on the teevee. Lt. Stern is appropriately skeptical, but agrees to accompany Mr. Weiss to this charity thing to get a good look. Lt. Stern reasserts that the fellow, Mr. Olivier, is too young and politely departs. Mr. Weiss is in a tizzy, like so many movie Cassandras. He gets a Luger from his dresser drawer at home and goes to Mr. Olivier’s house, where he is promptly killed by a stop-motion monster. Well, of course, now Lt. Stern is interested, especially since besides having a concentration camp tattoo, poor dead Mr. Weiss also has 666 burned into his flesh. 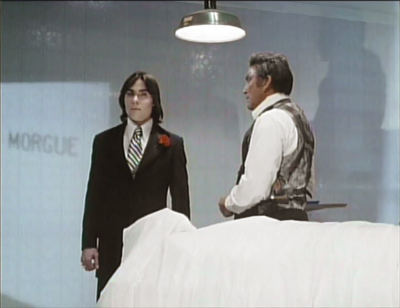 Claire is called in to sort out Mr. Weiss’ cause of death. Something inhumanly strong mashed him, essentially. Lt. Stern asks the cop who found Mr. Weiss if he had any last words. Yep: “Look at the wall”. Alone in the morgue hallway, Lt. Stern’s environment turns nearly pure white; he’s having a moment, but it is entirely personal. We do not learn what it is. 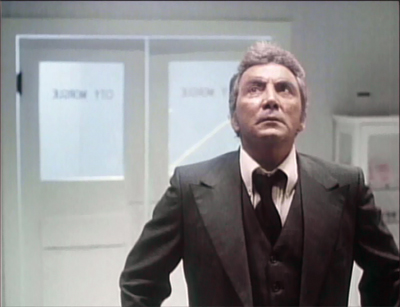 Enter the coolest scene in the movie. If you don’t know Richard Moll at all or only know him as Bull from NIGHT COURT or only know him as Bull from NIGHT COURT and Mestema in THE DUNGEONMASTER, you will be delighted by his performance here as James Hansen. He is alone on a television set, explaining why God doesn’t exist. It’s good stuff; his voice has unnatural gravity and it so rarely gets used to propel a smart character. Plus he’s a mile tall, so the effect is powerful. Anyways, he has a new book coming out about why nothing in this movie is real. The deck is stacked against him. While James speaks about there being no God on tv, Mr. Olivier and his pals watch him and snicker; they can use a guy like this to further Satan’s influence. 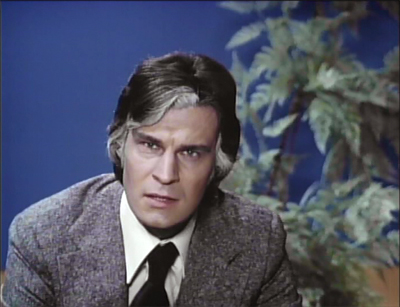 Mr. Papini knows this, too. He’s a defrocked monk, remember, and he’s seen the Devil. He comes to James and tells him he’s going to Hell, and that his wife is in danger. James politely hears him out and brushes him off. Papini turns up outside the Hansen household that night and James calls the police. They haul Papini away. That night, Claire dreams of the eternally young Nazi and the stop-motion monsters. That night, Mr. Olivier reels in a comely waitress at a local hotspot; when he undresses to have sex with her, he pulls off a sock to show he has hooves. Boom, one cut later she’s dumped out of a speeding car outside the restaurant. Her nameless boyfriend gets a gun, goes to Mr. Olivier’s house, and is killed by a stop-motion critter, nice and neat. It’s like the movie did another barrel-roll because the last one went so well. 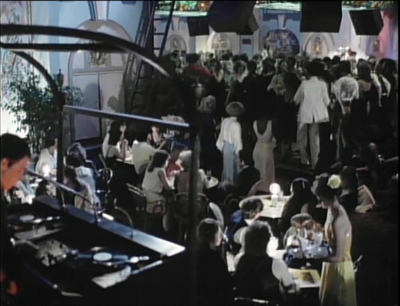 Clare has a waking vision in her house of the floor of her walk-in closet opening up to Hell and stop-motion damned trying to pull her in. So, like any Catholic that would really happen to, she immediately puts on a shawl and goes to Confession. The priest is way ahead of her. He tells Claire she’s been chosen to kill Mr. Olivier and that she’s to remove his heart and put it in a box that pops out of a secret compartment in her side of the confessional. It’s made of wood from the One True Cross. Deposit one demon heart, one less demon in the world. I do so enjoy the Catholic secret-agent policing-the-world thing. It was one of the better conceits of HUDSON HAWK, after all. 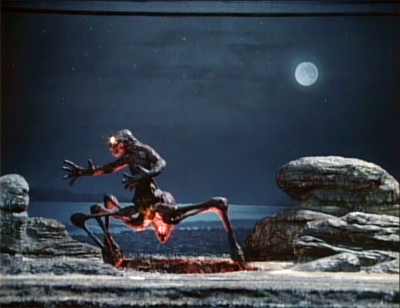 Events crash and smash into each other from here. Papini confronts the evil Ishtar (who’s kinda just been floating through the movie) and she gets a spider-monster to drag him to Hell. Olivier demands James recant his statement that “I am my own Master” and burns him on a cross for failing to do so. Stern gets blown up when a car in which his partner is being gassed to death explodes. All this careens into Claire doing one of those simple direct things that are so refreshing in movies that you end up forgiving any flaws. 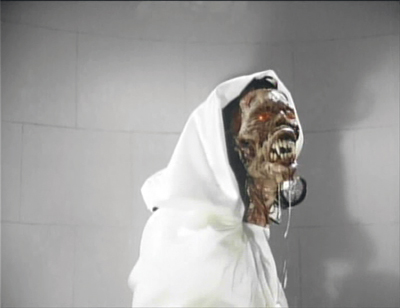 A quick bit of Classical History: when Nero wanted to get rid of his too-powerful mother, he tried all kinds of sneaky things, up to and including a boat that was designed to fold shut and sink. All kinds of things intervened to save her, and Nero was about to give up trying. He thought he was alone in the room when he voiced his frustration. One of his goons heard him, took it as an order, went to Agrippina’s house and beat her to death with a club. Ta da! Claire waits for Olivier to leave the house, and runs him over with her car. But we know the job’s not done yet. She drags him back to the hospital to remove his heart and put it in the box. It’s actually a swell twist on an exorcism, as that’s how the scene plays out. Alas, she ends up losing; she gets the heart out and into the box, but Olivier awakens, grabs a nurse, and next thing you know, the nurse is Olivier. Bye, Claire; nice try. 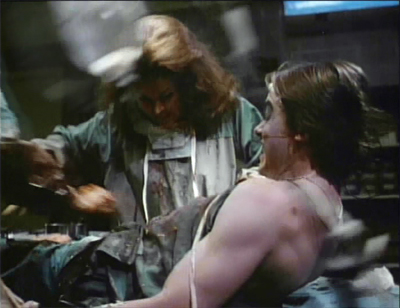 Claire’s soul is not in question, but James’ is. God says he’ll leave it to Claire whether or not James goes to Heaven. We see neither this process, not its result. We really don’t care. The movie moves like a rocketship and will only hold still for that one damn song that the musicians on the train keep playing. Then, blessedly, the train wrecks. Satan, predictably, loves this. God decides he’s had enough of this, despite earlier claims that he has all the time in the world. Just to flip the bird at Satan, God decides the whole train’s going to Heaven! The last shot is the train back in motion, chugging across the stars; and the damn band is up and playing that song again. You might think the message here is that God loves us. But you can’t hear that song right now. When you hear that song, you will realize how right Satan is. 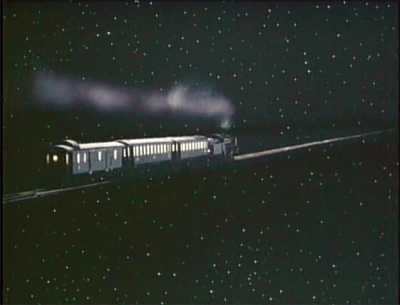 Stayed awake for the whole thing because Richard Moll is fantastic as James Hansen the Nobel Prize-winning Atheist who sticks to his principles, even after being turned to claymation and burned. Two wide awake eyes for this part. (One eye equals 15 minutes of runtime.)

John Ira Thomas writes graphic novels for Candle Light Press. He wants an action figure of that spidery Helldragger that got Papini. For more Movie Somnambulist fun, check out the archives!