Night Train To Terror (Part One)

THE MOVIE SOMNAMBULIST #15: Night Train To Terror (Part One) 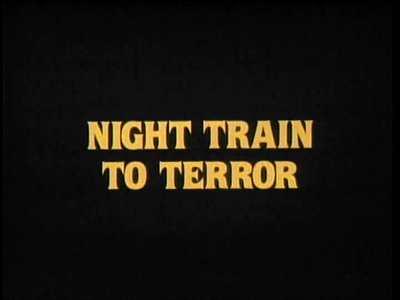 I would have sworn on a stack of bibles that the people behind THE DUNGEONMASTER were behind this movie too. It has that role-playing game mentality about it; everyone speaks in declarations that are always true (even the bad guys), and no-one has a personal thought to offer. Our writer-as-dungeonmaster here is Philip Yordan, a three-time Oscar nominee for writing (one-time winner, for BROKEN LANCE, which, I dunno). He also spent a lot of time fronting for blacklisted writers; for instance, his name is on the awesome JOHNNY GUITAR, but that was actually Ben Maddow. Word is, he’d take half the fee for doing this. He apparently really did write the screenplay for THE FIEND WHO WALKED THE WEST, known to all you Robert Evans aficionados out there as the KISS OF DEATH-goes-West flick that ended Evans’ acting career. Is this effort before us Oscar-worthy? No, but that doesn’t mean it isn’t a lot of fun. 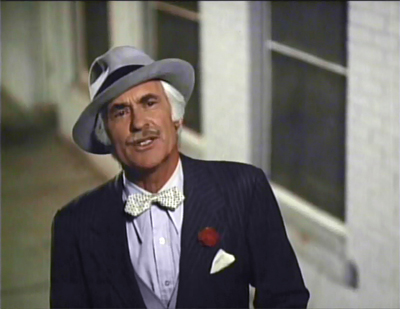 There are three stories in this movie, along with a wraparound sequence with a powerfully-80s band singing and dancing the night away on a train where God and Satan argue about what’s going to happen to the musicians’ souls when the train wrecks at dawn. To pass the time, the duo review three recent cases and decide who goes to Heaven and who goes to Hell. The view from the celestial compartment where this grand debate goes on is reminiscent of GALAXY EXPRESS 999 (especially the last shot in the movie). We don’t know much about the band, except that whether they go to Heaven or Hell, you end up wishing they’d go soon. They play the same song throughout the movie. They appear at the beginning and end; they also appear in between each of the cases. Try to keep your sanity through these bits. The title of this movie does not include the words “Part One”. It’s an anthology by one writer and several directors, and to unpack the whole thing I’m going to do an entry on each part. To write only one entry would barely recount the plot. 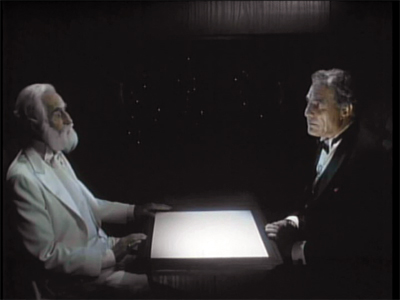 Case One is Harry Billings. Harry drove his car into some deep water on his wedding night because he’s a reckless schmuck (but he is also John Philip Law, so at least he’s a good-looking schmuck). He wakes in a sanitarium to find his wife drowned and that he’s been recruited by the staff to work evil deeds for them. His doctors, the rotund and evil Dr. Brewer and the calm and beautiful but also pretty evil Dr. Fargo hit him with electroconvulsive therapy and make him their slave. To what end? Well, they want him to go out and use his looks and charm to get close to pretty young ladies and slip fizzy pills into their drinks. 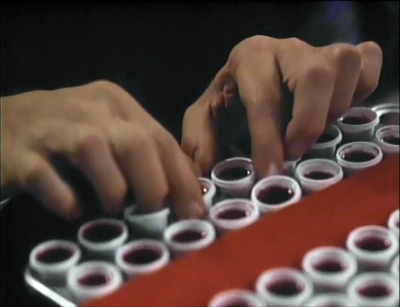 He decides to practice his technique by going to a bar and ordering drinks that he dumps in various places on the sly. He flirts with the bartender and talks with a flamboyantly-dressed older man. The scene is all about John Philip Law ditching shots and being complimented on his drinking speed, and it works. In a nod to a somewhat orderly universe, we’ll even see the old man again later. 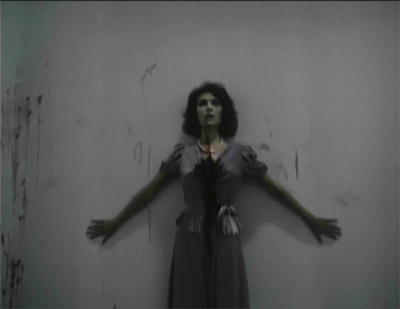 Back at the sanitarium, we’ve already seen Otto the orderly (Richard Moll!) greet a young couple who have driven up to the sanitarium from the main road. They need a phone, because they’re lost. Otto demands to know why they passed on all those payphones back by the road. Their reasons don’t sit well with Otto, but I suspect little does. In the space of seconds we get three shots: girl uses phone; boy is dragged off by Otto down a hallway; girl is clobbered. I’ll say it now: GPS technology saves lives. 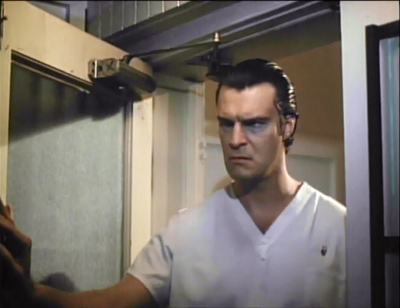 After Harry’s adventure in the bar, we see the fate of the young lady who used the telephone. She wakes up naked and in manacles in a padded cell. If you’re a Reanimator fetishist, this movie is the hot naked chicks strapped to medical equipment movie for you. Sex is implied but never shown; gore is shown and rarely implied. There’s a very cute scene in a church where Harry sidles up to a cute parishioner and joins in on the hymn (Will The Circle Be Unbroken, interestingly). When the communion wine shots get passed out, he helpfully hands her one after palming a fizzy pill into it. Now that’s some seriously unexplored roofie territory. 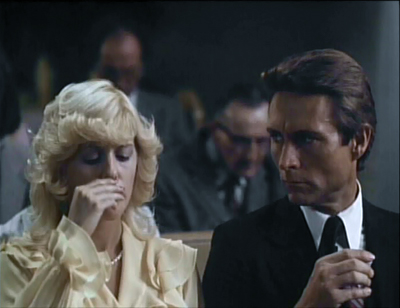 If you are one of those people who looks at cute actresses in drive-in movies and immediately wonders what she’d look like with her top off, this third of the movie is for you. In an amazingly short time, it’s Harry approaching some young lady, tinkering with her drink and boom, naked—over and over. The movie powers through several fast-cut roofings (?) and you’re almost dizzy. The casting folks for this movie had a surplus of verifiably cute actresses willing to do their part. There were more naked girls in this sequence than the opening of WEDDING CRASHERS, ferchrissakes. 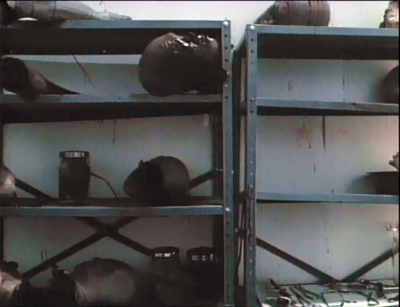 Enough girls are disappearing that someone has to come sniffing around; there are rules even for movies like this. Turns out it’s the oddly-dressed older gentleman that Harry bought drinks for earlier. He catches Dr. Brewer and Otto outside and asks them some nosy questions about a girl he’s seeking. Someone last saw her in a car and the plate on it belongs to the sanitarium. Dr. Brewer starts to stonewall but turns on a dime in a way that makes you think Otto’s gonna have sex with that guy soon. Instead, he shows the girl, all chained up and crazy, and just shrugs at the him. Dejected, the investigator leaves and does not return. It all pays the same to him. 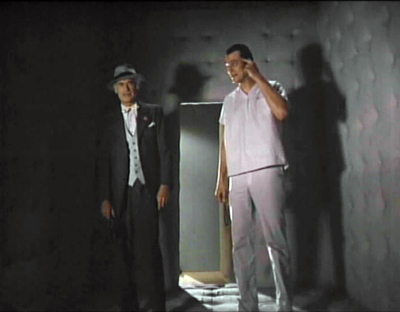 Dr. Brewer was lucky the investigator came when he did. The ultimate purpose of all this roofinating is for Otto to occasionally have sex with these women and also to dismember them and sell their parts to medical schools. You know, to learn about female parts and such. That part’s a little loose, but the circular pan shot that shows steel racks with limbs and such on them that terminates in a just-taped box of bits zipping out the door on a conveyor belt is completely worth it. 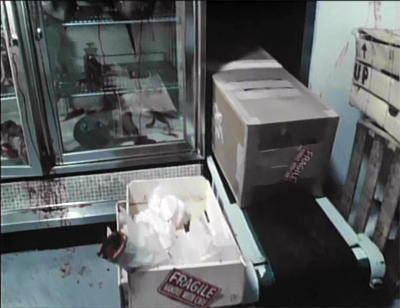 Something you don’t see much in what the hipsters among us now insist on calling grindhouse movies is this propulsive quality to the events. Don’t understand? Well forget it! There wasn’t a reason anyways, and we’re walking, we’re walking…. This movie stays busy every minute. Oh, Harry? Well, Dr Fargo, she falls for Harry and starts sleeping with him. She double-crosses Dr. Brewer and lobotomizes him; he’s put in a room with another lobotomized ex-partner and they play checkers. One day, the shocks wear off and Harry wants out. He kills Otto in a pretty good fight, and ties up Dr. Fargo while he releases the women who are still alive. The lobotodocs wander in and remember that they were supposed to do some surgery, and here someone is. They can’t remember how to do it, but they forge ahead anyways. Juicy! Harry bursts in to see this happening, and we go back to God and Satan. God says Harry gets no Heaven, and the porter suggests 100 years of Purgatory. Um, ok. So the Catholics win, everybody. Pass the word. 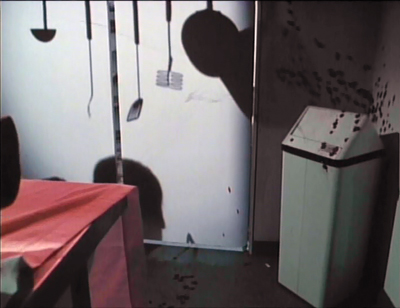 Back on the train, there’s more singing, more dancing. Satan wants all the musicians when they die in the morning; he gets them all, anyways (ho ho ho). God pities Satan a bit. He tells Satan he doesn’t know how to cry. Well, Satan knows how to laugh, smart guy. God can’t let this go; he says “I can laugh and cry at the same time” as if he’s answered the riddle of the Sphinx. But, can God sneeze and fart at the same time? 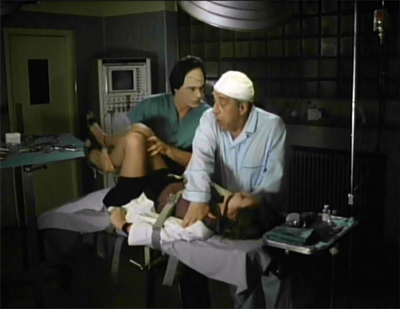 Stayed awake for the whole third of the movie because even its flaws are drive-in advantages; it’s an extremely fun flick that’s frankly spoilerproof. Huge imaginary bonus points granted for Richard Moll, who completely kills (ho ho ho) as Otto the sex-crazed dismemberer. Two wide awake eyes for this one. (One eye equals 15 minutes of runtime.)