Slave of the Cannibal God

THE MOVIE SOMNAMBULIST #4: Slave Of The Cannibal God 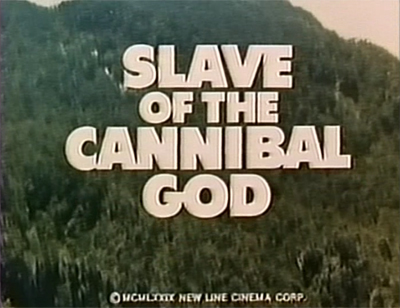 This needs saying: Sergio Martino doesn't get enough credit. Unlike a lot of Italian genre directors, he was good at everything he tried. He was better at some things, sure; but he always made a watchable movie. Compared to Argento, who made some great horror flicks and couldn't do much else, or Fulci, who isn't nearly as good at some things, Sergio Martino is the true utility hitter for the Italian Cinema Team that I just made up. I submit that he made the straight-up meanest flick I've ever seen, including all that Deodato cannibal stuff--Your Vice Is A Locked Room And I Have The Key. You will not find meaner people. But that's not the movie on the dissecting table today. It's Slave Of The Cannibal God. 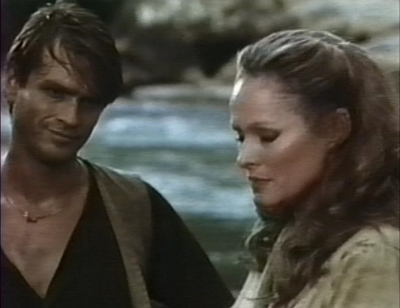 Italian cannibal movies always hold a lot of promise. The aforementioned Ruggiero Deodato made a few that test the will of the viewer in ways that modern torture porn still hasn't decoded properly. Someone gets eaten in this one, but it's not so bad. A fellow gets his pecker chopped off and a fist jammed in the hole that's left, but it's pretty fast (at least in this, which is the New Line Pictures edit, which definitely leaves bits out). Martino doesn't let the gore steal the show; that's not his deal. He takes a little Treasure Of The Sierra Madre, adds some Cannibal Ferox, nixes the nihilistic ending and there you have it. 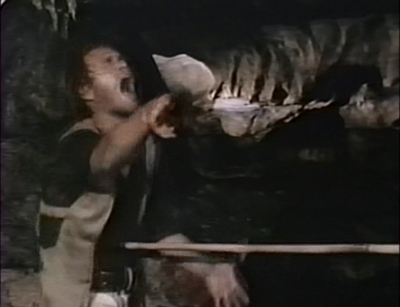 The required non-Italian leads are Stacy Keach (even if Claudio Cassinelli is the real star) and Ursula Andress. Keach is initially put up as the rugged hero and counterpoint to Andress' onscreen brother (take some pretty-boy, add a bit of the crazy eye, salt with a fey haircut, and let sit until spoiled) Arthur. The story is Susan (Andress) and her brother Arthur (Antonio Marsina) are looking for Susan's husband Henry, who's gone missing in a jungle that's illegal to fart around in. They hire Edward (Keach) to help find him. Along the way they meet Manolo (Cassinelli), who's the real protagonist of this thing. He carries the movie's message, which I will not impart here; because unless you duck early and often it will hit you square in the face several times before the movie is up. 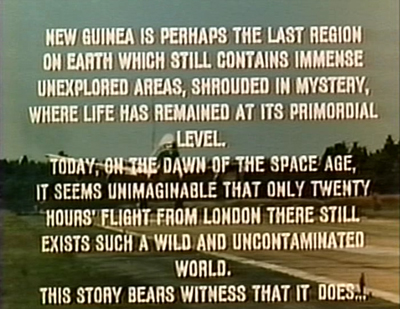 Everybody except Manolo is actually in it for the uranium, no matter what they say. Manolo's in it so he can get in Susan. Unlike a lot of movies (and life), this tactic succeeds. Don't get too excited, though; this is consummated in a chaste way. The nudity comes from a random native girl (tellingly, she lives at a Christian mission and is a convert) who visits Arthur one night and they start some hot love rasslin'. She dies at the tip of a non-figurative spear in the midst of attempting the difficult piledriver of love manuever. Suddenly it's a jungle Friday the 13th movie. Keeping in accordance with the rule that Italian movies explain stuff you weren't really wondering about, Arthur explains that the spear was meant for him. They had no idea there was a girl on top of him when they threw it. Which is fine if the spear was thrown from way away, but this was inside a hut. Bah, who let logic in here? This is a drive-in movie, dammit; logic just pees the rug and fails to entertain us. Away! 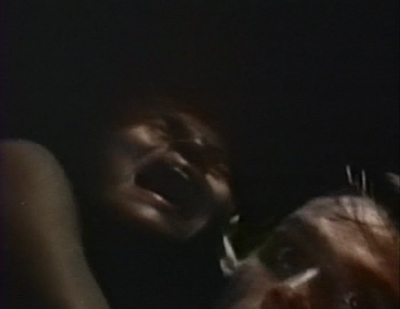 There are a lot of Italian flicks that you can tell were designed around a single image. Lots of them are just 89 minutes of lead in to the freeze frame they were thinking of, but Martino throws in a neat one about an hour in--Henry's body staked up with his geiger counter jammed flush into his torso. It's pretty cool to see. Turns out he was carrying a picture of himself and Susan, so apparently after they killed him they realized he was a god. Manolo explains this because either he knows his stuff or he knows nobody's gonna challenge him. So the Pooka natives recognize Susan as the god's wife and immediately tie her up and dress her funny. This too makes a pretty good image. 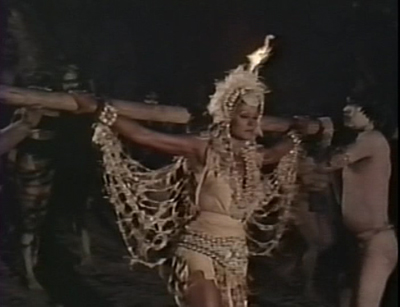 I have notes on the plot itself, but the movie's just as good without it. They stuff in reasons for every damn thing, and there's even a good easter-egg for people who actually sit down and write the thing out trying to work it out. Just watch the quiet young twitchy native kid that Edward brings on the expedition. It's not bad. 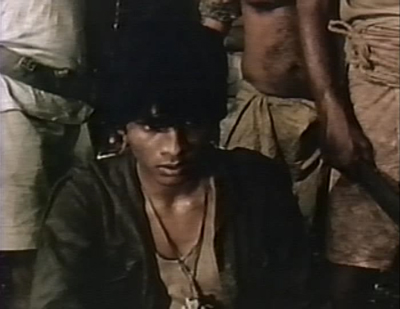 Speaking of the natives who come along on the expedition, they validate and even act on what's long been considered a rule of American horror movies: the brownest guy dies first. When there's only one native left alongside Edward, Susan, and Arthur, he sees this truth but quick and bolts. This, of course, only speeds his demise because of that other great American rule of horror--don't go anywhere alone. 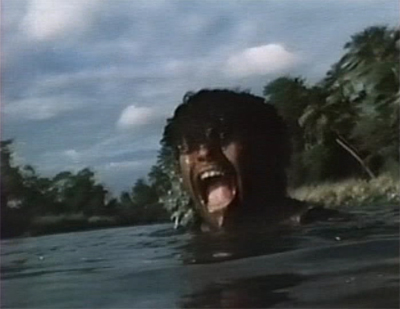 Like The Legend Of Bigfoot, this film is long on actual nature footage. Martino suggests the passage of time in several places by showing critters fighting. The snake and the bird are pretty good. The turtle vs the alligator is suprisingly vigorous. Another good indication that Martino and company just went to a jungle someplace is what has to be the gruesomest scene in the film--the iguana sacrifice. Edward has to kill a tarantula to save Susan and the natives in the group have to atone for this. Killing a spider is so bad, it seems, that they must gut a live iguana, skin it, then tear and eat its guts Dawn-Of-The-Dead-style. This they do. It's pretty juicy. 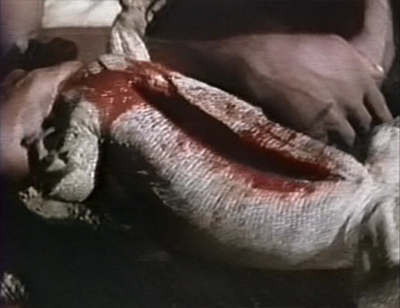 The narrative works well enough; Martino pulls a protagonist switch to keep things interesting (or to rebel against being forced to have Stacy Keach take top billing). The action is good; everyone acquits themselves well. The scenery at times is pretty great. This is the best movie of the box so far. Watch it while eating pizza for a gut check. 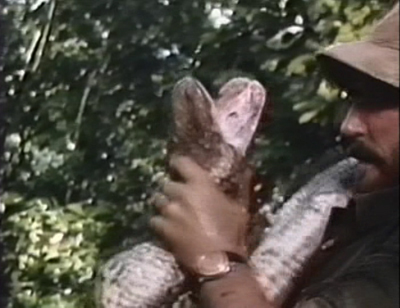 Stayed awake for the whole thing because I like Sergio Martino and had high hopes for Ursula Andress taking her top off. Six wide awake eyes for this one. (One eye equals 15 minutes of runtime.)

John Ira Thomas writes graphic novels for Candle Light Press. He also had rattlesnake once. It doesn't taste like chicken; they lie.