THE MOVIE SOMNAMBULIST #28 -- Breakout From Oppression

First off, let's talk about this title. I kept this flick at arm's length for a while on the basis of the name alone. It's not a bad title, but it has nothing to do with the movie. You look at that title and you think maybe political thriller, sadistic regime with a message of hope or power to the people. As it turns out, Sha chu chong wei is a pretty great Hong Kong giallo, even if none of the online translators can make sense of the original title. The oppression from the title is really more of a jinx experienced by Fonda, a lady who could use a real breakout. This title bothers the hell out of me; what about Breaking The Spell? Undoing The Hex? Escaping Fate? Braveheart? 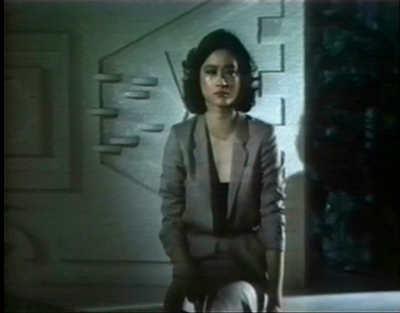 All the traditional giallo tropes are here, with the exception of a killer POV shot with black leather gloves. But it does have the advantage of a culture in which wearing a half-size sword in your belt isn't a cause for suspicion. Like in BLOOD MANIA, the director of this movie (a one-timer named Karen Yang) seems informed by the Italians, Argento in particular. There's imaginative use of color, sudden bizarro cutaways, a really cool fuzztone Goblin-like soundtrack, and a killer with a hell of a plan. Even the story beats and pacing hew much closer to Italian genre filmmaking rather than Hong Kong. It was written by Godfrey Ho, who wrote more movies with "ninja" in the title than you can name. Make a list of every movie you can think of with "ninja" in the title; now imagine writing a script for every one of those and a dozen more. It ain't easy being Godfrey Ho. 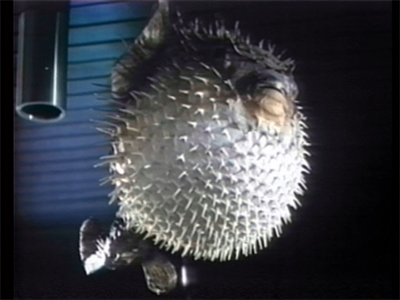 So I mentioned before about Fonda's jinx. She turns up in a new town with a letter offering her a job at a newspaper. Much of the opening is Fonda on a boat going to her new life, peppered with voiceovers and flashbacks to her time in prison. It made me think of DEAD MAN briefly, and left me wondering if she was some crusading reporter who'd been sent to jail because of her fiery articles about a cruel and oppressive government. And now she'd have to write puff pieces to stay out of jail and away from psychopaths who bury razorblades in your soap so that just the slightest edge peeks out. But that isn't it at all; the goddamn title is distracting me! Snapping The Losing Streak? Ending the Slump? Dodging The Razor? Major League? 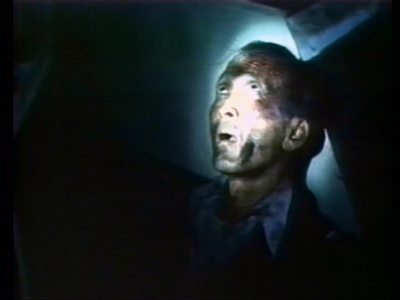 See, Fonda's never worked for a newspaper. A random letter arrived offering her the Assistant Editorship to a newspaper and she thought "What luck!" and off she went on her new adventure. Still, after the crap she's been through, if she'd gotten a letter saying she'd just been made Assistant Feral Hog Inseminator somewhere she'd have probably taken that one too. Fonda went to jail for a crime she didn't commit, and her inability to convince anyone of her innocence has her thinking she's jinxed. She's got a noir character's sense of fatalism; when more accusations occur, she mostly just sits there and takes it. 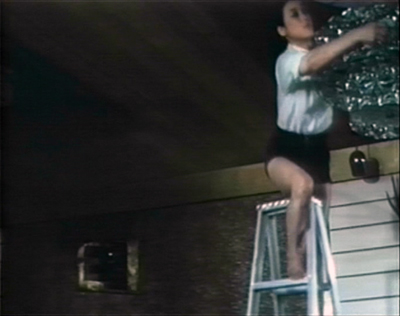 The character to keep an eye on in this is Sheena, the publisher's secretary; they keep calling the publisher the president, but he's the publisher. Sheena is seventeen, has a full-time job at the newspaper, takes care of her invalid grandmother, and has the publisher locked up in her basement. Dig this plan: Sheena abducted her boss and sent a letter to Fonda, in his name, offering her a job. She does this so the publisher isn't there to ask what the hell, and also to nut Fonda's credibility right out of the gate. When Fonda goes to the newspaper office with her letter expecting a job, nobody knows who the hell she is. The job she's offered is already filled by a whiny busybody who moves unscathed throughout the movie. Enter editor Simon, who smooths things over by making Fonda a paste-up girl. Simon's a dreamy Chinese fella with a blow-cut, a mustache, and a heart of gold. 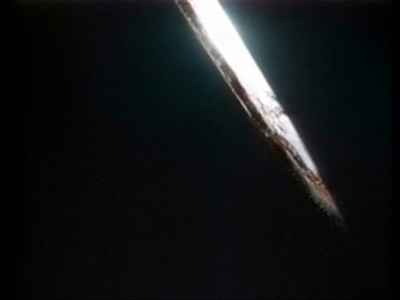 Here are the dynamics. Sheena isn't fond-o Fonda for historical reasons and has lured her here for humiliation and eventual doom. Simon digs Fonda; Sheena digs Simon. This doubles Sheena's rage at Fonda. I mentioned Sheena taking care of her invalid grandmother; it's not so much that as a straight-up case of elder abuse. Sheena resents having to take care of her grandmother because her parents are dead. Her dad was stepping out on her mom and her mom killed her dad and killed herself. If you haven't guessed that Fonda was the other woman in that situation, back three spaces and lose your turn. See, Sheena didn't think it was enough that Fonda was wrongly accused of the stabbing death of her father and went upstate for eight years. In her mind, Fonda killed her father, made her mom crazy, stuck her with a drooling grandma in a wheelchair and robbed her of a childhood. 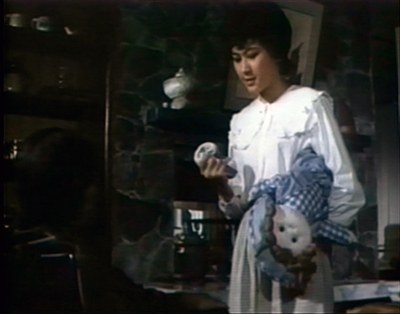 The whole thing emanates from the resentful way Sheena "cares" for her grandmother. All of her actions are rationalized through a lens of being the one with all the shitty jobs. This becomes a compulsion to insert herself cleverly and violently into situations best left entirely alone. She's the one with a bag of shit to hold, so she's the garbageman. Follow her reasoning on this chain of events: she lures Fonda to town and starts making her life hell while playing pal to her. She even goes so far as to put glass shards into some spring rolls that are served by Fonda to the daughter of the busybody; the kid nearly bleeds out and everyone is mad at Fonda, who blames Sheena and attacks her. Sheena reacts with horror and Fonda looks even more guilty, all according to plan. Shit, I'm lost. 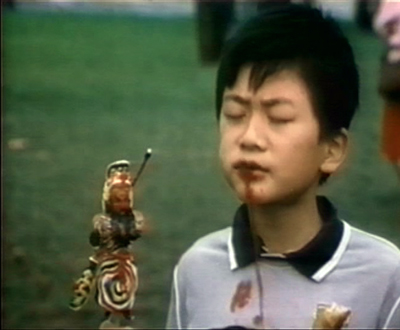 Right, Sheena's resentment over her lost childhood. She wears little girl dresses at home and hauls around a Holly Hobby knock-off doll that she decapitates in a fit of rage. When she reveals herself as the killer and chases Fonda all over the damn place, she wears what looks like kid's actionwear, complete with mini-sword tucked in her belt. But Simon's fallen in love with Fonda, dammit, and he believes her when she says she didn't put glass in the spring rolls. So Sheena lures him to her house with a fake plumbing problem and pops him on the head with a pipe wrench. His new room-mate is the publisher, who died after he refused to eat, played dead, attacked Sheena, and got his brains bashed in. Sheena's reason why the publisher's dead is great: he wouldn't eat. 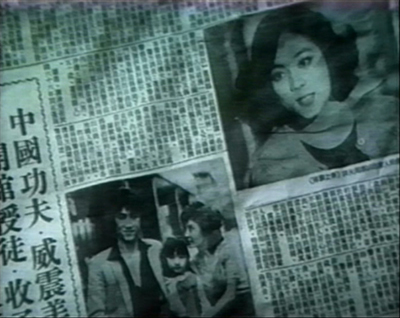 Sheena's performance takes over the movie right when she visits Fonda in the hospital. See, after Fonda attacked Sheena, Fonda was sedated and put in the hospital to calm down. Sheena slips in to Fonda's room and reaches out in a great POV shot to Fonda's neck. Instead of strangling her, Sheena caresses Fonda's face with both hands to see if she's playing possum. Satisfied, she puts a pillow on Fonda's face to smother her. Fonda awakens and gets a lucky flail in, knocking Sheena back. Not missing a trick, Sheena gets up to comfort Fonda, telling her she was just adjusting the covers. By this time, Fonda's doubting her own theories even as they form; she accepts this explanation and they chat amiably. 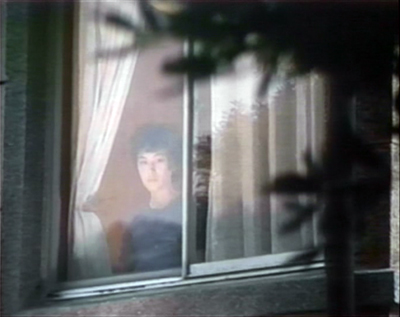 The chase at the end clearly evokes everything we know about psycho killers: they're relentless, they're tougher than they look and they are never ever dead the first time you kill them. The fight is good and realistic; even the fall that apparently kills Sheena doesn't look all that bad. Her arm gets broken and the movie stands by it. Simon's escape from the basement is great, with invalid grandma pulling a clever save by reaching up to tip over a large glass pitcher so Simon can use the glass shards to cut his bonds. There's a visually powerful scene, wrecked by the crappy transfer, where Sheena throws some of Simon's stuff off a rocky cliff and arranges an apparent drowning and loss at sea to get everyone to stop looking for him, and also to further break Fonda's will. She even pulls a fantastic samurai-style slash-and-run to kill a nosy photographer in two speedy passes. 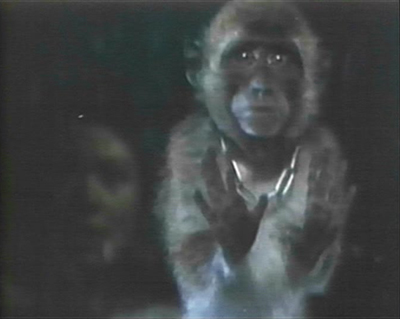 Sheena's so disciplined that when she finally gets Fonda in her clutches, she has a plan to blame every single death on Fonda. She sets up a noose and makes her put it on. Even now, Sheena is wildly successful at compartmentalizing. Sure, she wants Fonda dead ultimately; but if making her hang herself and take the rap generates more shame, then that's Sheena's path. She's taking care of everything. And really, Sheena wins. Sure, Sheena dies and everyone finds out what she did, but Fonda ends up going to jail for killing Sheena. And it's played like a happy ending! Simon tells Fonda that he'll get her a good lawyer AND he'll wait for her. Fonda nods, happy that someone is willing to wait for her personal shitstorm to blow over. There is no breakout from oppression here. This is a noir masquerading as a giallo; it's meatballs with black coffee, stirred with a glass-laced spring roll. 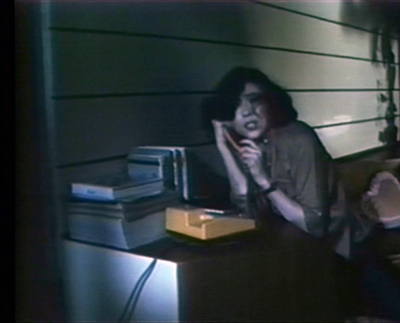 Stayed awake for the whole thing because I couldn't get the title problem out of my head; what you need is a short neat phrase that evokes escaping from a straitjacket only to find you're locked in a trunk at the bottom of a lake. The Germans would have one. In English all those phrases end up sounding like post-90s metal bands--REGRETFUL FREEDOM, PITEOUS ESCAPE, CONSEQUENTIAL WEIGHT. Although, come to think of it, FATES WARNING would be a good title. Six wide awake eyes for this one. (One eye equals 15 minutes of runtime.)

John Ira Thomas writes graphic novels for Candle Light Press. He peed himself a little during the scene where they go to investigate the triple murder. That was a good scare. For more Movie Somnambulist fun, check out the archives!