I remember when Garbage Pail Kids debuted at our elementary school about as vividly as I remember anything. I was in the fourth grade and had just returned to school from a family vacation to discover that a new trend had descended on the school during my recess. I was shocked. Not just because I was made to realize that life went on without me- but that this was actually something I should have been on the ground floor of. I leave for a few days and suddenly everyone dives head first in what has to be the coolest thing to collect ever. 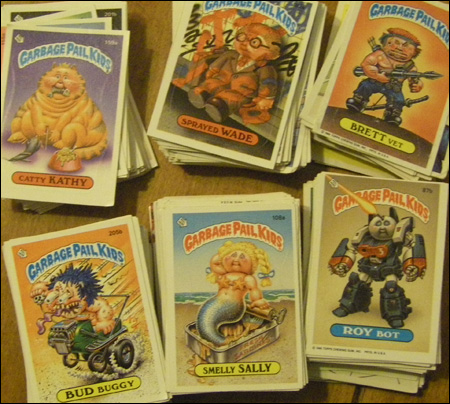 Looking back, I still don't know how I managed to cope with the situation so well. I was an avid reader of Mad Magazine. I even read Cracked religiously. I should have been the driving force behind introducing these beautiful works of art to my peers. Snapping gum? Totally me. But Garbage Pail Kids? Not only did I return to find that everyone knew way more about them than I did- but to make matters worse; I didn't have any.

For those who aren't entirely clear about what Garbage Pail Kids are- they're trading cards that were introduced by Topps. The cards were basically baseball cards. Only they weren't baseball cards at all. Sure they were collectibel cards that came in packages complete with a stick of obsidian like gum that would make faster work of your tongue then a razor blade to an eye ball, but they weren't baseball cards. Baseball cards were a total waste of time. But Garbage Pail Kids were collectible cards that featured grotesque drawings of Cabbage Patch Kids like children gone horribly awry. Some smoked, some did drugs, some had horribly skin afflictions and some were in the process of mutilating themselves. They were wholly inappropriate and they had a higher resale value on the black top than Nerds. 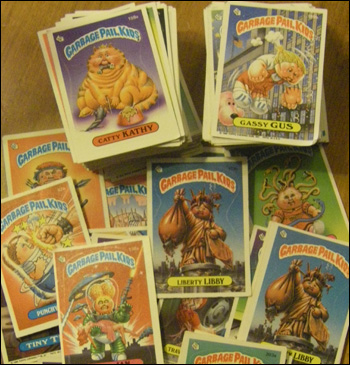 I know, you're probably thinking Mark, I went to elementary school too, so how could a stupid card be worth more than Nerds? The problem didn't lie in cost. These things were a quarter a pack. Some places would sell you five packs for a dollar. The problem came in finding a supplier. There was a very high demand on Garbage Pail Kids and Topps responded by taking an Opec like approach to supplying gore hungry children. You simply couldn't get your mitts on these things.

Sure, things changed dramatically by the time the 5th and 6th editions came out, but this was 1985. Were talking the first and second ones here. I don't know how many packs I went through and how many trades I made before I managed to acquire a complete set of these beauties. 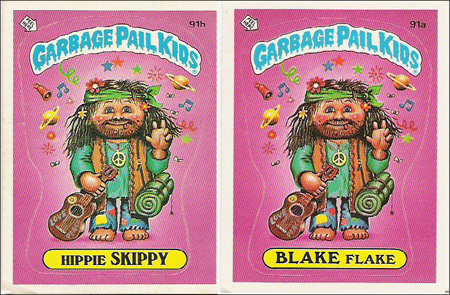 You see there were just shy of 50 unique drawings to each edition, but the catch was that each drawing was turned into two separate cards with different names (these were numbered A and B respectively). The key was not only to get all 50 drawings- you also had to have the A and B version. 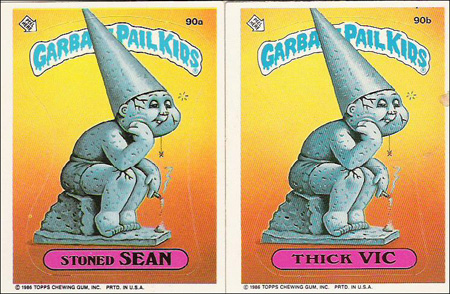 Going through Bear's collection, I took it upon myself to scan a few samples in here. If time allows and I'm feeling motivated, I'll see if I can't organize and scan some more. But it really cracks me up looking back on just how raunchy these cards were. And the best part was that the humor was totally right at my level. Sure, Mad Magazine was great, but even in the 80s it seemed like they were still making a whole lot of Nixon references. But Garbage Pail Kids were different. Their creators got me. 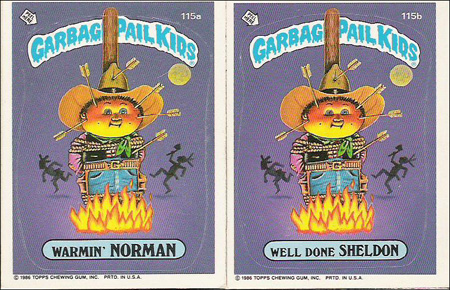 I don't know how many 7-11s and convenience stores I made my parents take me to while the mania lasted, but looking back, it was totally worth it.

Well, that's all for now. But if you have any Garbage Pail Kids related trivia/memories to share, be sure to leave a comment. They're usually always appreciated.