I know, you're still reeling from the first part of this review, but let's keep this train going, shall we? Once we felt like our stomachs had settled, we headed over to the rides. Oaks Park has an odd mix of rides ranging from kiddie rides to carnival style thrill rides. The only discernible difference between Oaks Park and a carnival was that the rides at Oaks Park appeared to be bolted down a little tighter. 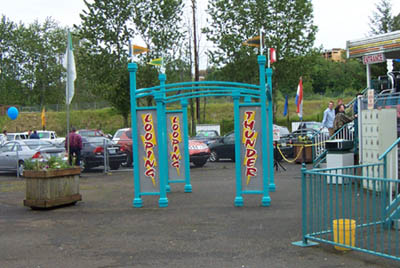 The park's largest ride had to be looping thunder- a metal roller coaster complete with a loop. The park was so excited about this fact that they dressed up the entrance to the ride with an arch and some lockers in case you wanted to store stuff. I had never seen a carnival style roller coaster before that attempted a loop so I was a bit apprehensive at first, especially considering that the loop was so tight that it really looked like it would snap your neck if you went through it fast enough: 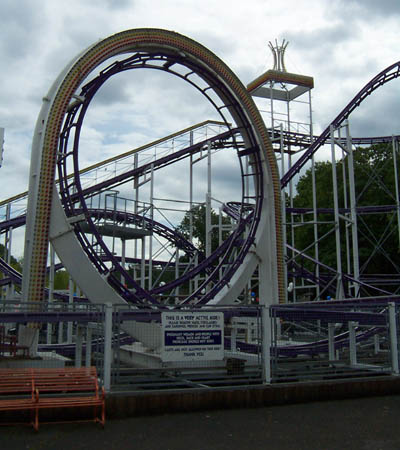 We then hit a couple of the carnival style sping you and dip you type rides only to discover that I really don't enjoy the dipping and spinning quite like I used to. I don't know what happened along the way, but gravity seemed to get a little stronger. 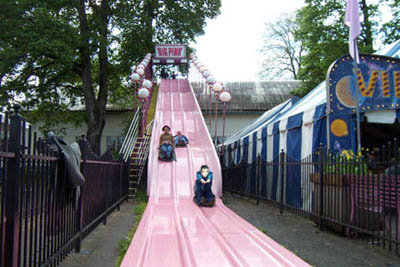 It had been years since I've slid down one of these and it's actually more fun as an adult. The other thing that's a lot more fun is the bumper cars and Oaks Park has some great old fashioned bumper cars. None of the plastic or the fancy paint jobs, these things are meant to bump not to look pretty. I think I got a little too into the bumper cars. Kids were crying, their parents were yelling at me to stop. See Bear in the pic below? I took this after I bumped her so hard she thought her spleen had come dislocated. 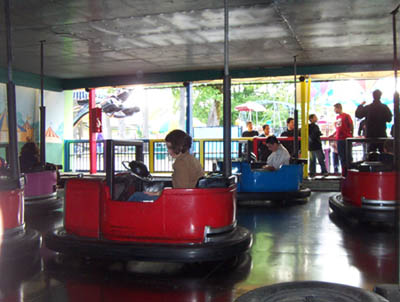 Deciding it was time to slow things down a little we headed to the Lewis and Clark ride. This is a class dark style ride and I was thrilled when I first saw it because you don't see dark rides very much anymore. But the thrill soon passed when I saw this was a Lewis and Clark themed ride:

Why couldn't they have done a good theme for this ride like bigfoot or cursed pirates or zombies or something that you'd want to go on? Nope, someone decided that this ride needed to be a tribute to the area and, in Oregon, Lewis and Clark is all we have. Nobody from outside of the Northwest really knows or cares about Lewis and Clark and anyone living in the area is sick to death of them because they're the closest thing we have to an outstanding Oregonian. I get that there aren't a lot of famous Oregonians to parade around, but we could at least come up with a state superhero or mascot instead of beating this one piece of history to death.

But enough of my diatribe, let's get back to the ride. It's a classic dark style ride where you get to see scenes from the Lewis and Clark adventure. 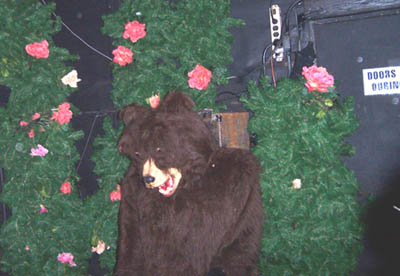 The encounter bears and rain and see the beached whale, etc. etc. etc. The only problem is that the ride moves so fast that you're constantly hearing the soundtrack for at least two different scenes of the ride. I wasn't really sure if this was a post modern dark ride or what, but it definitely made the story more interesting. Though the best part is that after they see the beached whale, the next scene is of an alien. I thought the ride was finally about to get good, but they tied it into some sort of an inspiration message about how your adventure was just beginning. 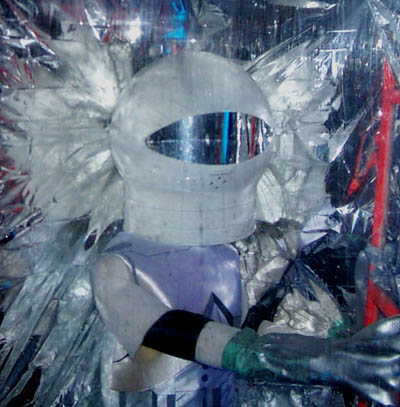 Leaving the Lewis and Clark ride a little confused, we headed over to the carrousel. The Carrousel was built in 1912 and has some great artwork on it. There's something really surreal about the smooth constant motion, grotesque animals and organ music of a carrousel. It's the carnival version of Suspiria. They also have a miniature train at the park that takes you through the old oak trees. On the day we went, they were having a giant car sale on the grounds and had set up the financing center in the oaks so you could ride through the park and watch people finance a car at 20% interest. "You're bleeding me here. Hey honey, look at the lovely oaks..." 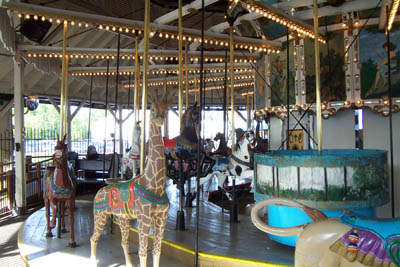 One of the nice things about Oaks Park is that there's no admission fee and you can either pay for the rides with tickets or buy an arm band that lets you ride as much as you want for only $14 so you can definitely have a fun filled day without breaking the bank. Our arm bands even came with a free skate rental and roller skating session at their historic rink, but I'll save that story for another page...


Read Page 1 of this story