If you're an American, then you're at least familiar with the name Necco Wafer. Actually, that would be a great twist on a suspense film. You know, the hero finally discovers that 'johnny' is an alien/cyborg/jihadist because 'he's' not familiar with Necco Wafers. As an added punch, the hero could take out his eye at the end of the movie by throwing a Necco Wafer like one of those ninja stars...

But where were we? I'm sitting here trying to think of something to say about Necco Wafers. Gertie's sitting at my feet thinking she'd like to try one, and you've probably left the site already. This is all going awry.

Let's start from the beginning. For those of you who aren't familiar with Necco Wafers (you cyborg!), they are candy wafers that come rolled with different colors:

The candies have been produced since 1847 when an immigrant by the name of Oliver Chase invented the first candy machine. That's right, people have been enjoying these things for a long time...and they're still producing them today. 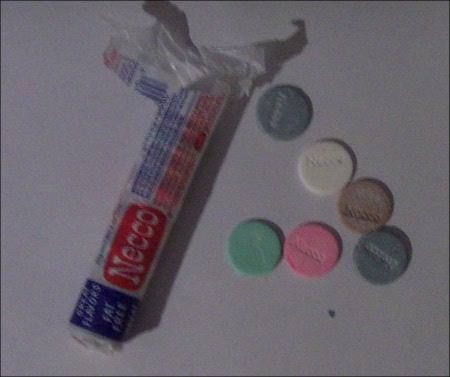 If you sit down and start enjoying a roll of Necco Wafers like I'm doing right now, you'll definitely be struck by the fact that this is probably the most bizarre set of flavors you can get in a candy. Orange, lemon, and lime? No problem, it's like Starburst. Cinnamon and Wintergreen? Breath mints. Clove, Chocolate, and licorice? I don't think most palates are ready for that combo. Why not throw in horehound? Or frankincense? Perhaps some myrrh...

I think most people are so put off by the strange texture of the candy (chalk) that they never get around to enjoying the flavor medley. If you go out and purchase a roll, avoid biting into them. Just let them dissolve into your mouth. Once you do, you'll realize that these are the exact same thing as those conversation hearts you get on Valentine's day.

According to the Necco website, they still make Necco Wafer to the tune of 4 billion a year. They didn't say if they sold that many, or if the majority were used for some other nefarious purpose, but someone somewhere is eating a lot of Necco Wafers.

I'll be reporting back with another review of a classic candy, but until then, be sure to check out the Necco Website at Necco.com there's some great information over there.