Coming out of the winter of our discontent, we decided to get out of Portland and head to the coast. Not being all that familiar with the Oregon coast, we decided to forego the usual tourist beaches and head south to Florence. So we made our reservations, loaded up the car with snacks and headed south for the weekend. 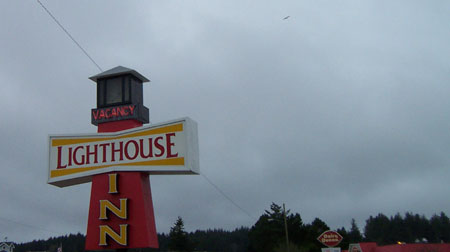 At this point, you're probably thinking: "Mark, why do I want to continue reading about Florence?" That's a good question and I'm not entirely sure. But let's not get side tracked. The Mathematician made our reservations at the Lighthouse Inn for the weekend. After our stay at the Wild River Inn I was a bit concerned about how reasonable the rates were, but my worries were quickly ameliorated by the friendly hotel staff. 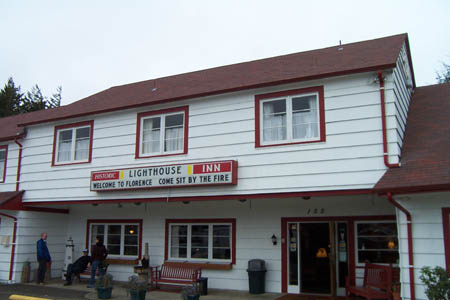 The Lighthouse Inn was built back in the 1930s. The hotel itself is a little threadbare in places, but the staff was incredibly nice. They even invite you to come sit by the fire where you can peruse their collection of travel brochures or play boggle. They even had in room entertainment featuring FREE movie rentals: 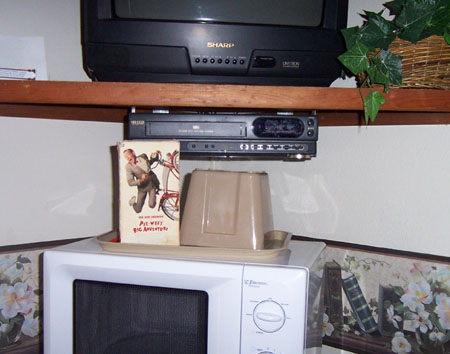 That's something you won't find at the Hilton, or Wild River Inn. Their VHS selection ranged from Pee Wee's Big Adventure (pictured above) to The Quest for Fire, so even the most discriminating cinemaphile would be sure to find something suitable to their palate. The other thing that really got me about the Lighthouse Inn was the fact that the entire outside of the hotel was lined with paper towel dispensers. They never explained why and I never asked, so I guess it's one of those things where you really have to be in the know.

But we didn't come to Florence to sit around our hotel and watch VHS movies, we came to see the shit out of this town. Like most of the other towns I've been to along the coast, Florence has a small downtown lined with restaurants and bric-a-brac shops. And, like every other coastal town, it's kind of creepy. Not in a life threatening type of way, but you just get that feeling from time to time that one of the shopkeepers is going to invite you into a back room to show you his collection of human skin, or that zombies will suddenly appear out of the fog in a search for fresh brains. 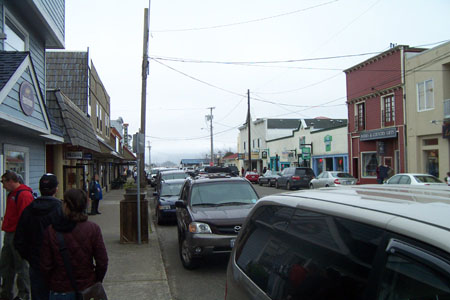 I think it has something to do with the fact that the locals living in these towns really don't have much to do other than serve the tourists during the summer. The other 8 months of the year, they're really left to entertain themselves. And zombie fighting.

Having done zero in the way of research, we weren't quite prepared for everything Florence had in store for us. The major attraction in the area is the sand dunes. For one reason or another, the beach is lined with them. This attracts the off-road ATV types in hordes. I guess that sand dunes and ATVs are an equation for fun. Having left our ATVs at home, we were left to explore the other options.

The second most popular attraction in Florence is the Sea Lion Cave. Billed as the largest sea cave in the world, we decided to head north to go check it out. Having been struck by the majesty of Oregon's Premier Theme Park only a week earlier, we were all feeling pretty optimistic. 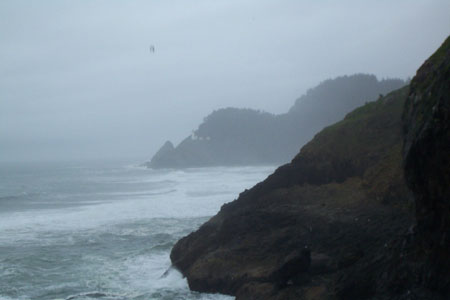 When you first get to the Sea Lion Cave, you enter through the gift shop (and it's a good one) where you can presumably either stay and shop, or pay your admission and check out the cave. I was really in the mood for sea lions, so we headed to the admission counter where we were instructed that there were two things to see: the rookery and the cave. We hit the rookery first which is really just a vantage point where you can look down at a ledge covered with sea lions. It's cool, but it's not the up close and personal experience I was looking for. After that, we headed to the elevator to make our descent into the sea cave.

This consists of a 12 story elevator ride that takes you down the center of the cliff into a giant sea cave. 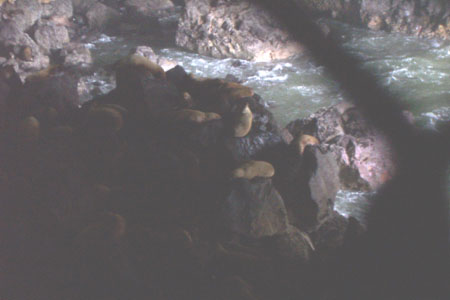 Once the elevator doors open, you're greeted by a cacophony of sea lion roars. It's literally just like the sound of hell from the Art Bell show. The cave itself is a few feet away and you get to view the sea lions from a perch on the north end of the cave. I have to say, I was really impressed with the Sea Lion Cave. Not only is it a giant sea cave, but it's filled with sea lions. They don't allow flash photography in the cave, so the pictures aren't very good, but you're looking at a giant cave filled with sea lions. 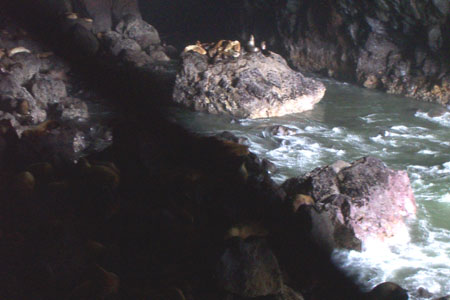 If you ever end up at the sea lion cave, be warned that the cave itself is a bit on the smelly side. I don't know if it was the fact that it was filled with sea lions, or the guy standing next to me, but it was very aromatic.

With plenty of time left on our vacation, we had to think long and hard about how to spend the rest of our time. Ok, so we headed straight to the local bars. We started by hitting Jax. Jax is advertised all over Florence and portrays itself as a fun place to go. We were very optimistic- a lounge attached to a chinese restaurant that features karaoke...what's not to like?

For one, there's the people who drink at Jax. It was purely older men who looked like they'd fought a few zombies in their day. And then there was the bartender: scantily clad and looking like she just walked out of a methodone clinic. If ATVs and sand dunes are a recipe for fun, Jax is a recipe for a beating - or at least a really itchy rash. But the best part had to be the drink specials. They offered something called a suck and blow and a dang fang. We inquired about the suck and blow, and the bartender looked at us like we were retarded for not knowing. A suck and blow is a jell-o shot served in a hollow tube. You see, one person sucks on one end and the other person blows. I was lost in the vision of buying the entire bar (full of weathered men) a round of suck and blows, but thought better of it. We still don't know what a dang fang is.

We spent our time at Jax quietly sipping our drinks and looking over our shoulders. We then headed across the parking lot to the Seagull. The Seagull was exactly what a tourist bar should be. It was relatively safe, the bartender was exceptionally helpful, and the patrons there were friendly. All in all, it was a great time and I highly recommend the Seagull if you're ever in Florence. 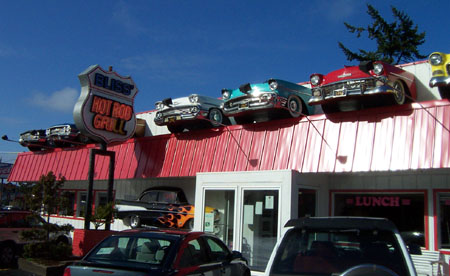 The next morning, we packed our bags and went to go see the sand dunes. On our way out of town, we stopped at Bliss' for breakfast. Bliss' is your usual 50's diner type restaurant. The notable exception to this is that the entire restaurant is lined with old cars. Where there aren't cars, there are pictures of cars. 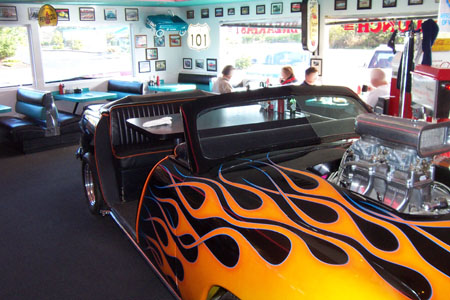 You can even eat in a booth that's made out of a car! It's like going through a drive-thru, but still being inside. And the food is ok, too.