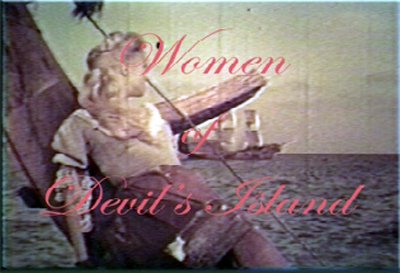 There are things you expect from a sixties Italian movie about French atrocities called WOMEN OF DEVIL’S ISLAND, but the way memory and time work it comes out as a disappointment if you don’t orient yourself properly. One of my old professors, Jack Holtsmark, says that there’s too often a temptation to imprint current attitudes and moral conclusions onto people in the past, damning them for things that simply didn’t register to them, as they are not people from the future. This isn’t a justification for the attitudes of historical figures (I always think of that great bit from JUDGMENT IN NUREMBERG when Maximillian Schell quotes Oliver Wendell Holmes giving legal approval to sterilizing dumb people and how it makes your guts shrink a little), just a reminder that your expectations as a person from their science-fiction future should take the time into account. What’s my point? This movie isn’t porn, not even softcore, and it’s wrong to damn it for this. 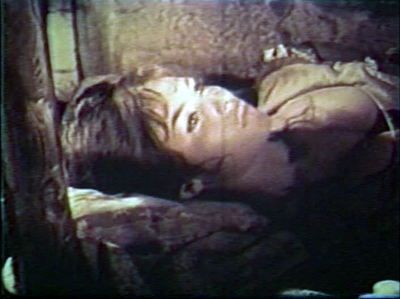 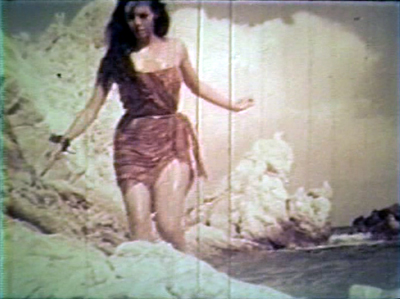 This movie in fact aims so squarely at a certain image and hits it as often as possible, that it becomes fetishized, even though all that’s being fetishized is cleavage. You know how that one time someone kinda random told you about some not exactly sexual thing that makes them so hot they almost freak out and it just sounds like some mundane thing and then suddenly you’re worried because it might be a preamble to asking you to hold the chain or call him a good boy or whatever? Yeah, me either. Anymore, when something is not obviously sexual, it’s assumed to be a fetish when someone shows prurient interest in it. To a modern eye, my interest in WOMEN OF DEVIL’S ISLAND would be fetishistic; but frankly it’s guilt-free exploitation. I mean, I just spent three paragraphs setting you up for the idea that this movie turns my crank a bit; obviously it got to me in some weird way. 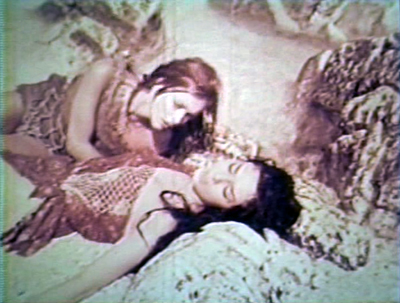 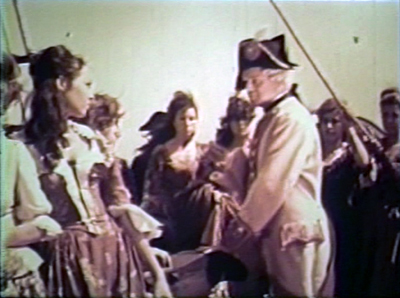 As if clicking neatly into the collective male id, what you get is an Italian movie about a French all-female (wait for it) penal colony. It’s a period piece, so they’re all wearing long, frilly, off the shoulder dresses with garters and the whole deal. They all range from cute to hot (until a couple hawk-nosed ones pop in during the shootout at the end, as if they’re the ones posing for the eventual coin or mural of the event) and spend their days knee-deep in a lake panning for gold, dodging crocodiles, and singing a jaunty French ditty while the sun beats down on them. If you think this sucks, you are not processing these elements correctly. Pretend I’m the guy from your sci-fi future and listen to me: this is sexy. The ladies are strong-jawed and defiant. Because it’s a sixties Italian movie about the French, the women occasionally use sex to get what they want, but are mostly smart enough not to fall for the head guard’s bullshit. You go with him, you get thrown in a room with a dozen dudes. Then the door closes and we are left to wonder. Being left to wonder is actually pretty refreshing these days. 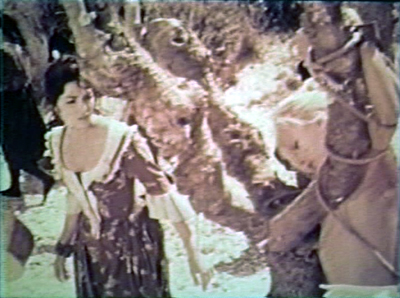 The plot? Okay: Martine is sent to Devil’s Island. Her sister is already there, but when she seeks her out she claims not to know her. She took the name of a prostitute who died on the ship she came in on so they wouldn’t know she’s the daughter of nobility. Martine didn’t do that and nothing happens because of her name, so who knows what that’s about. Turns out the sister is the Big X of this camp and she’s got a plan to get everyone out. It’s a pretty good plan, but the sister’s virtue does her in. She figures that even if they get to the nearest island, they have no money and would have to sell themselves to get anywhere. She resolves to steal some of the gold they pan and that’s where it all falls apart. One of the prisoners, Melina, is consumptive, so she agrees to sex with the guards to get bedrest; this is a pretty great long game to play on the guards when you think about it. This movie glams up the prisoners so much that you would have sex with the consumptive lady, even. 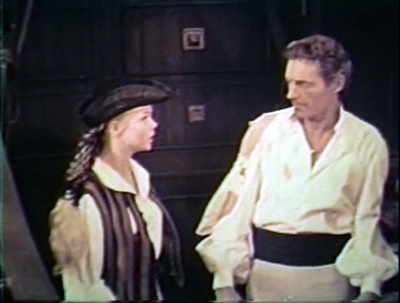 Trouble is, Melina’s also a rat. She tells the cruel Lt. LeFarve of the plan and Martine’s sister ends up shot dead while making off with two bags of gold. The rest of the escapees are rounded up and tied to timbers of an old shipwreck; partly this is because LeFarve still needs them to work to meet the gold quota. It’s also partly to work the cleavage. As if there were a rule about this somewhere, the homeliest prisoner dies of exposure while the rest grit their teeth and stay pretty. Now at this point, I was thinking: okay, European movie, Devil’s Island, it could end right here. Problem is, this was the thirty minute mark. 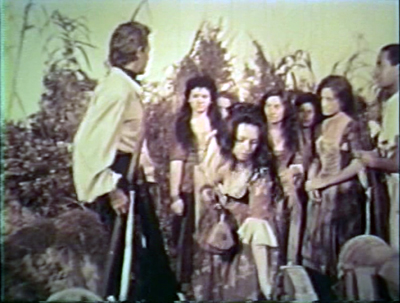 A ship arrives ahead of the gold ship and Captain Valiere arrives alone from it. He informs Lt. LaFarve (who has been eagerly anticipating a promotion off the island and even promised extra gold production to get it) that there’s no promotion, that all he gets for all his trouble is a boss, namely Capt. Valiere. Valiere is a reformer. He forbids the whipping of the women and says he will hang any guard who does so. Le Farve grouses that the women won’t work if you don’t beat them, and Valiere says oh just starve them a little for punishment instead. Valiere even rescues Martine from a crocodile. What a guy, right? 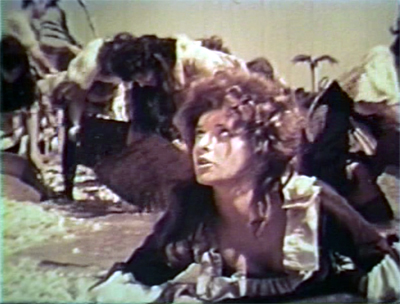 There are some interesting touches in this movie with regard to message. Early on, when Martine’s sister uses sex to get access to the treasury to help everyone escape, she backs Lt. LeFarve off a little by gently reminding him that even he knows that sex is better when you don’t take the woman. Valiere expresses the same idea later; both the good and bad guys of the piece agree on this point. Even LaFarve wants them to want him, even if it’s really a choice between another damn day out there with the crocodiles and ten minutes twiddling his piddler. As far as sexual politics go, the movie shoots for an exaggerated (and oversimplified) realism: men have the power but obey certain invisible rules that the women successfully navigate to get what they want. Before we get too enamored of the idea that this is actually the case, we hear Martine’s sister’s disappointment that LeFarve’s last pre-shag promise to let her leave the island didn’t come to fruition. That didn’t work? Really? 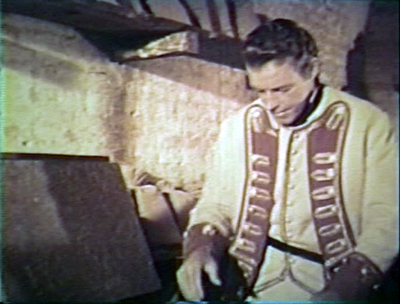 The guys are no geniuses, either. LeFarve is completely fooled by Valiere, who’s actually a revolutionary posing as a French Captain in a daring bid to steal all the gold of Devil’s Island. It’s a good trick, and it’s all well-played onscreen. Valiere gets away with all the gold, but he’s gotten sweet on Martine. So he goes back for her, despite his buddies saying hey we got away with a gigantic amount of gold. But being a revolutionary, he’s also an idealist in love. He goes back and cracks up his little boat on the rocks. The prisoners find him and send him off to a part of the island where the guards don’t go but they themselves occasionally access by removing their dresses and swimming there. With all the wet 18th century underclothes, it looks a lot like a remake of ONE MILLION YEARS B.C. 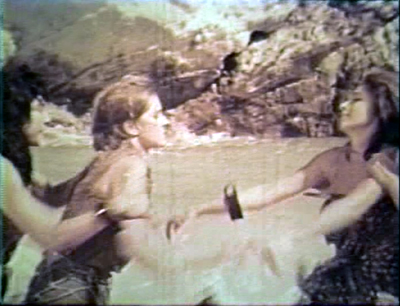 It all ends breathlessly, with Valiere arming the prisoners and leading them against LeFarve and his regiment. Melina the rat even redeems herself by grabbing a torch and blowing up the powder magazine in a suicidal move. This is when a couple less than pretty prisoners emerge; they know how to shoot the guns. I refuse to correlate these events. Valiere and Martine and many of the prisoners make it to the revolutionaries’ boat and they are happy together. No more hunching over in low-cut dresses for them, no sir! So, alas, the movie ends tragically. 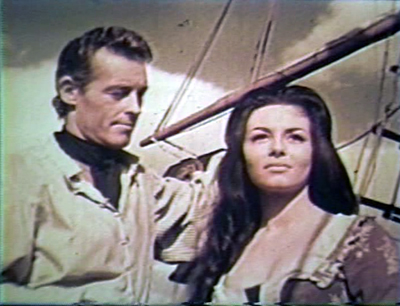 Stayed awake for the whole thing because there were dozens of pretty women leaning over in low-cut dresses. Plus the scenes where they all flail around their bunkhouse pretending to be really tired until the guard leaves is pretty great cinema too. Six wide awake eyes for this one. (One eye equals 15 minutes of runtime.)