I Wonder Who's Killing Her Now

THE MOVIE SOMNAMBULIST #2: I Wonder Who's Killing Her Now 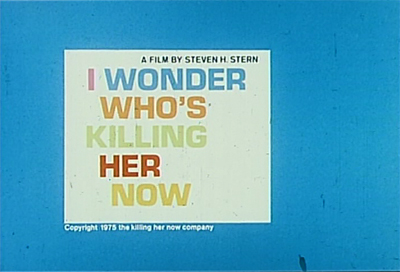 This movie makes me suspect I'm high, but makes me want to be drunk. It feels like a perfect fit for the early days of HBO; I can see it come on right after Barbara Eden in HARPER VALLEY PTA and right before the Jerry Reed/Suzanne Pleshette vehicle HOT STUFF. It is the shaggiest of shaggy dog tales, a maze of borcht-belt routines mixed with the very real feeling that this is a comedy written by depressives. Watching it, I feel like it's 2 AM in the basement of my parents' house; I'm ten years old and I've crept past their room to get to the downstairs tv to watch any cool weird shit I can. One night I watched Tom Snyder interview Charles Manson back when he was still scary; about halfway through the interview, red lights started flashing through the front windows. The house two doors down had caught fire and suddenly the whole house was awake and I was busted and tired and confused and thinking about death. That's what this movie makes me remember. 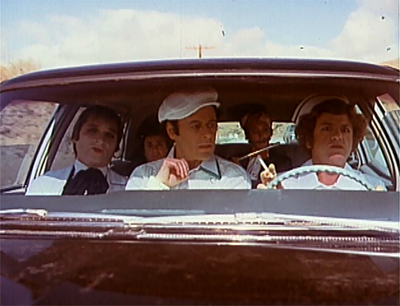 Plot doesn't matter in a shaggy dog story; it's the distraction. Still, it's simple enough. Ne'er do well Jordan Oliver loses a ton of money in the stock market because he's a moron and has to pay up to cover his losses. To do this he decides to take out insurance on his rich wife and have her killed. He pays a man to do the deed. But he can't bring himself to do it, so he keeps a chunk of the cash and subcontracts the job out. In all, seven guys accept the job, have a change of heart, then farm the job out. 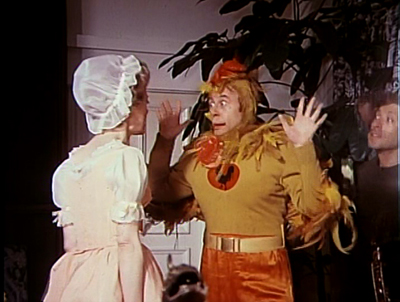 There's a complication. There always is. The insurance company wants the wife, Clarice, to undergo a physical before they approve the policy. Since she can't know about it, Jordan convinces the doctor to pretend he's an old friend and to do the physical on Clarice without her noticing. When Jordan gets home to start this charade, Clarice is leaving. What to do? He pulls a gun on her and tells her she has to meet his old friend or else. He keeps it hidden from the doc so he doesn't know about it. The doctor is Pat Morita, who says things like "I rost my contact rens" while going under the dinner table to wrap a blood pressure cuff around Clarice's leg. 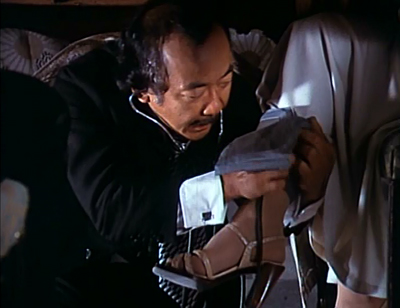 The movie seems to be the result of a bunch of old Jewish comedians sitting around asking "You know what would be funny?". And then they did all of it in a movie. There are some really good actors in this: Bob Dishy, Richard Libertini, Vito Scotti, Bill Dana. These guys are performing at as high a level as they can here and that's the only reason it reaches the otherworldly quality it has. Well, that and the really weird set pieces. In the first scene, Jordan seems to by playing the piano; then the joke becomes the disconnect between the piano on the soundtrack and what his hands are obviously doing. Then they pulls back and we find his playing is being ghosted by a little person with a little piano. Then they bust off six little person jokes, the little person salutes (his job complete) and leaves. 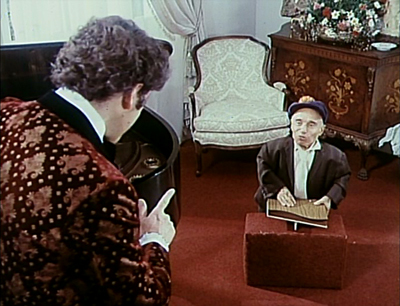 Wait, there's more. Oliver's in an empty bar with the sounds of a busy full bar on the soundtrack. The waitress is an old lady with cobwebs all over her. Jordan shouts at her and she turns a knob and the bar sounds disappear. My mind starts to wander. From my notes: "Jordan meets a captain who isn't a captain (Bill Dana). He's looking for a boat and a port. The mafia comes to take him." The captain's name is Bobo. Much is made of this fact. Anyway, Captain Bobo is the first of the hired killers. So Jordan hires him and the rest of the movies about how the killer's a total boob, right? 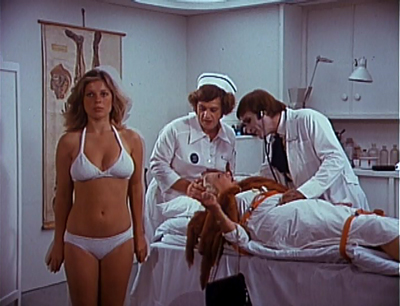 There's a complication. There always is. Turns out Pat Morita's not a real doctor. The insurance is off! Jordan's gotta stop 'em! So he tracks down each of the killers, and as he meets each , they all join him in his quest to stop the murder of Clarice. So let's see: there's Captain Bobo, who hired a Jewish comedian playing such a broad Indian-from-India stereotype that I frankly thought he was just retarded for a while; put another way, it's an Indian caricature that would even offend Pakistanis. The Not-very-Indian Orchestra conductor (he conducts an audible but absent orchestra when we first see him BTW) hires a doctor who talks like Bela Lugosi (as in is doing a deliberate Lugosi) and a nurse in obvious drag who run a fat farm; Jordan, Bobo and the so-not-an-Indian-but-probably-retarded guy go to a costume shop to get huge fatsuits to infiltrate the fat farm. In a quick gag, a guy in a Superman suit exits the costume store and flies off. Bill Dana looks at him as if he wishes he could do the same. The doctor and the nurse hire a bricklayer who uses the CIA as his cover (you read that right-you felt slightly high trying to parse that, didn't you?), but he hired a guy who got hit on the head and thinks he's an Italian facist to kill Clarice. Well, he hired an actor to do the job for six dollars and ninety-five cents, because actors don't make any money AM I RIGHT, FOLKS? HAH? 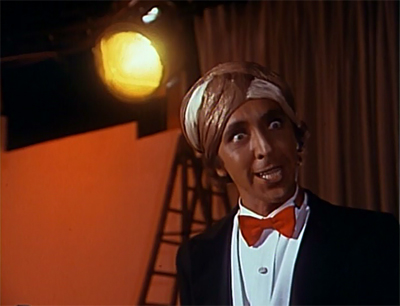 During all this, an unseen killer with mismatched shoes keeps trying and failing to kill Clarice as she enjoys a Las Vegas vacation. He tries a slingshot with a ball-bearing load, a car, a knife...he even goes the Olive Queen/Duke Boys route with dynamite tied to an arrow. He even rents a shark (we see the shark rental sign, ho ho ho) to put in the hotel pool, but a young lad fishing in the swimming pool catches it.

The characters are perfect actors for a drama of existential crisis pretending to be a comedy. They haven't a brain in their heads, yet it's easy to see they're really intelligent people strapped into a dumb pantomime where they can be ignorant about anything for a joke. Crazily, I think the movie could be made at least twice as funny if you do what they did in the Phantom Edit (that re-edit of The Phantom Menace, where, amongst other changes, they turned Jar-Jar's lines into gibberish and used subtitles instead), only leave the lines as they are. I think if this were imposed upon the unwitting as a foreign-language farce with subtitles, it would go over pretty well. As a rule, we dislike broad farce in English in movies; but we lap it up in foreign films. 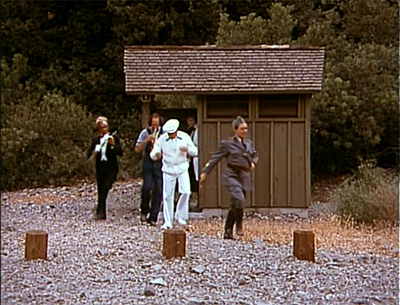 Unlike last time, I'm not going to spoil the mystery of this. Because the shaggy dog story's only purpose is to distract you, and at that this movie succeeds perfectly. The mystery actually makes sense and is set up in a fair and reasonable way. There's definitely layers to this thing, deliberate ones. Don't get me wrong; this movie's hardly an onion. It's more like an artichoke. 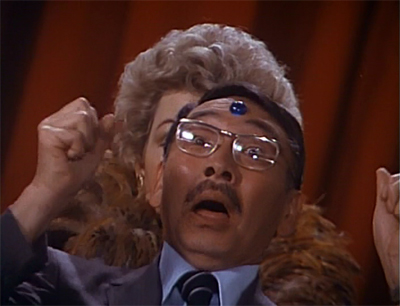 Stayed awake for the whole thing because I seriously had to see what the hell the resolution was. Six wide awake eyes for this one. (One eye equals 15 minutes of runtime. 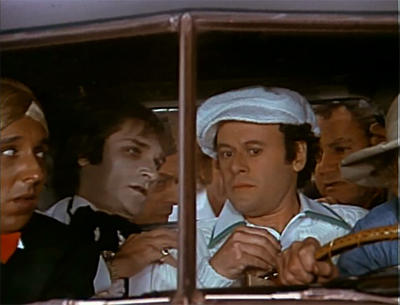